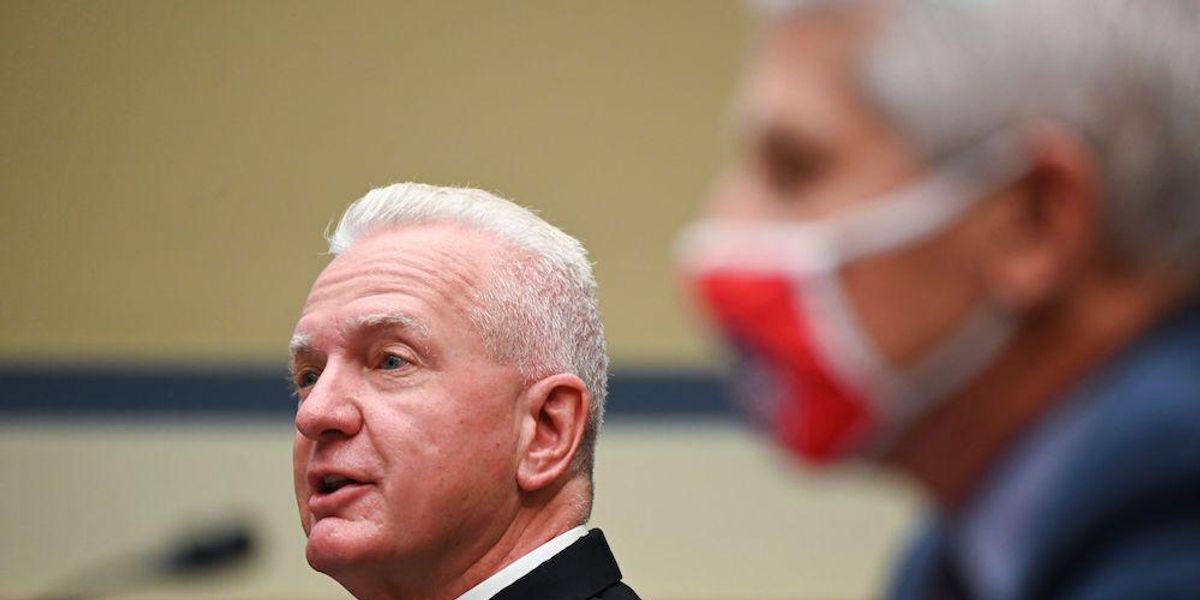 Former Heath and Human Services Assistant Secretary Adm. Brett Giroir, a onetime member of the White House Coronavirus Task Force, does not buy Dr. Anthony Fauci’s and other so-called experts’ claims that the virus naturally moved from animals to humans.

Instead, he believes the “most likely explanation” is that the virus leaked from the Wuhan Institute of Virology where dangerous research — that “could have been funded by the NIH” — was being conducted.

Giroir added that it is “certainly a possibility” that the virus was part of China’s “offensive bioweapons program.”

What did he say about Fauci’s claims?

Fox News’ Bill Hemmer asked Giroir why he believed the coronavirus was a lab leak and not a natural phenomenon.

“I really became convinced of that with the WHO report in March which showed definitively that there was no environmental source, there was no intermediary host, there was really nothing linking this to any virus in the natural world,” Giroir said. “But on the other side, the evidence was becoming compelling: Look there is a laboratory within five miles of the origin that was doing dangerous research on bat coronaviruses. Sometimes the simplest explanation is that.

“We do have lab leaks. They’ve happened multiple times: SARS has leaked out of a laboratory and even caused secondary deaths. We know that in 1979 anthrax leaked out of a Soviet laboratory and killed 60 people,” the admiral noted. “So lab leaks are not uncommon, and I really think data like people getting ill in November from the laboratory, if that proves true, that coincides exactly when we know this virus hit China.”

“The evidence is there,” Giroir asserted.

Then he turned his fire on Fauci, who adamantly denied the virus came from a lab leak and “argued very convincingly” that it somehow evolved from nature.

Later, the admiral described Fauci’s claims that the virus’ mutations “naturally evolved” from animal to human were “completely false.”

According to Giroir, Fauci’s claims were intentionally “antagonistic to President Trump and to the administration” in response to suggestions the White House had been making that the virus leaked from a Chinese lab.

Any lab-leak concessions Fauci and other experts who touted the “natural” virus origins and discounted the lab-leak theory are making now, he said, are just “a lot of CYA.”

What about the bioweapons thing?

In a note before the interview, which Hemmer quoted, Giroir told Fox News producers, “It is not outrageous to hypothesize that the virus could have been part of an offensive bioweapons program and leaked out accidentally.”

Hemmer asked the admiral about the claim, which Giroir admitted is not the most likely possibility but it is “certainly a possibility” considering the fact that the WIV was doing dangerous work and the fact that China has an “extensive biological weapons program.”

And he added that it should not be automatically discounted, as National Institutes of Health Director Francis Collins has done.

“It is not crazy, as people suggest, like Dr. Collins suggested, that this could have been part of a bio-program,” he said. “It is possible.”

Pressed by Hemmer on the likelihood, Giroir added, that “it is certainly a possibility.”

“This virus is not a great biological weapon if you look at characteristics, but it certainly could have been part of a program,” he said. “Again, I’m not saying that it was. I’m saying that that should still be considered a possibility.”

“The most likely explanation,” Giroir said, “is this was dangerous research — could have been funded by the NIH — and it leaked out by a laboratory accident.”

“The only thing we knew was that there were no obvious fingerprints of this virus being engineered.” @DrGiroir weig… https://t.co/2ijrbqWknX

Dan Rather rips fellow leftist Jon Stewart’s ‘dangerous’ assertion that COVID-19 came from Wuhan lab: ‘Playing into the trope of the mad scientist’

Former CDC chief says he got death threats from fellow scientists after he went public with his belief that the coronavirus came from a...