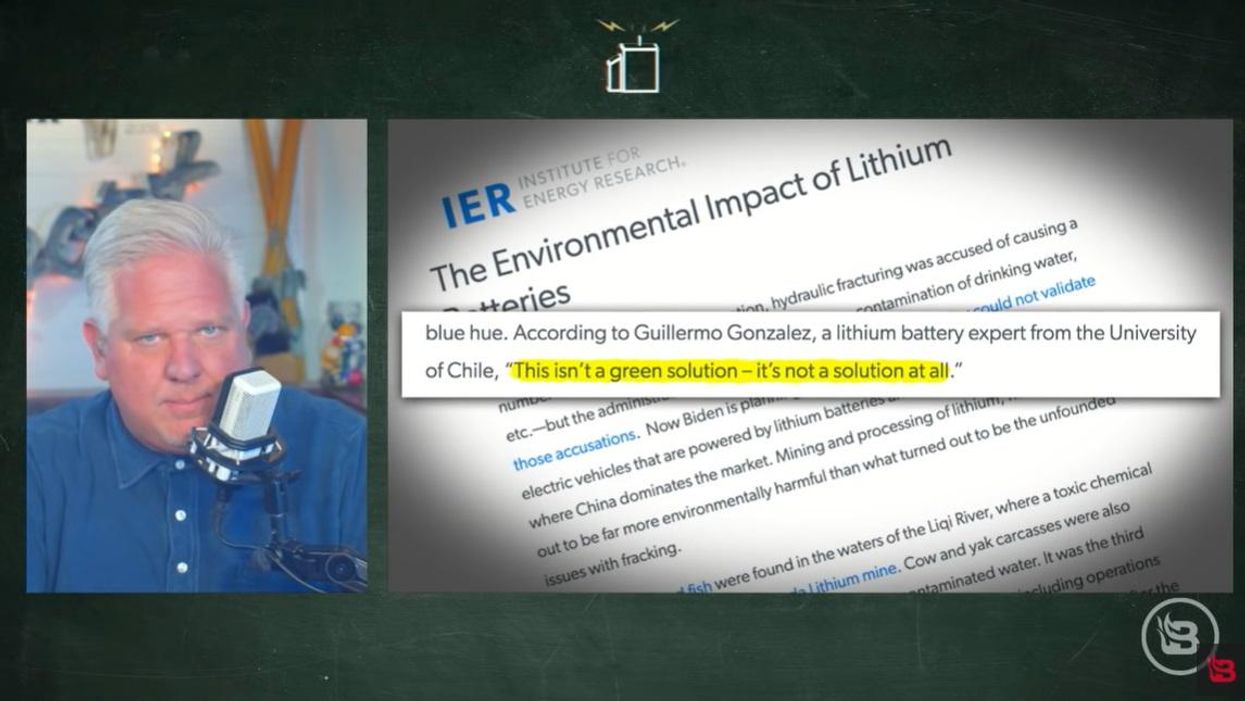 Electric vehicles are the wave of the future. They are so much better for the environment. At least that’s what we have been told, but is this correct?

On his TV special, Glenn Beck explained how electric vehicles (EVs) might not actually be the environmental solution we’ve been led to believe. In fact, they may not be a solution at all.

Glenn shared a recent article from LiveScience that reported:

A 2014 study published in the journal Proceedings of the National Academy of Sciences looked at the entire life cycle of an EV’s emissions, from mining the metals required for the batteries to producing the electricity needed to power them, and then compared this with the average emissions of a gas-powered vehicle. The team found that when electric vehicles are charged with coal-powered electricity, they’re actually worse for the environment than conventional gasoline cars.

He next shared an article from The Greenage, which stated:

The Union of Concerned Scientists has calculated that manufacturing a mid-sized EV with an 84-mile range results in about 15 percent more emissions than manufacturing an equivalent gasoline vehicle. For larger, longer-range EVs that travel more than 250 miles per charge, the manufacturing emissions can be as much as 68 percent higher.

Noting how electric vehicles and other fossil-fuel alternatives require the use of mined minerals like lithium, cobalt, zinc, copper, and nickel, among others, Glenn quoted an International Energy Agency report that warned reaching the goals of the Paris Agreement “would mean a quadrupling of mineral requirements for clean energy technologies by 2040. An even faster transition, to hit net-zero globally by 2050, would require six times more mineral inputs in 2040 than today.”

“Can [you] predict which country is the world leader in processing the minerals needed for these batteries? Right, China,” Glenn stated. “The average EV requires over 200 kilograms of minerals. The average gas vehicle requires 40 kilograms of minerals, mostly copper. A single EV has 22 pounds of lithium in it … yet another way that the green reset of American energy is putting us all at the mercy of Communist China.”

“Oh, and remember during the Obama administration when the world was gonna end’ over fracking?” Glenn asked. “Well, the Institute for Energy Research now says, and I quote, ‘Mining and processing of lithium, however, turns out to be far more environmentally harmful than what turned out to be the unfounded issues with fracking.'”

Watch the video clip from Wednesday night’s episode of “Glenn TV” below for more details:

SAVE $10 WITH PROMO CODE GLENN.