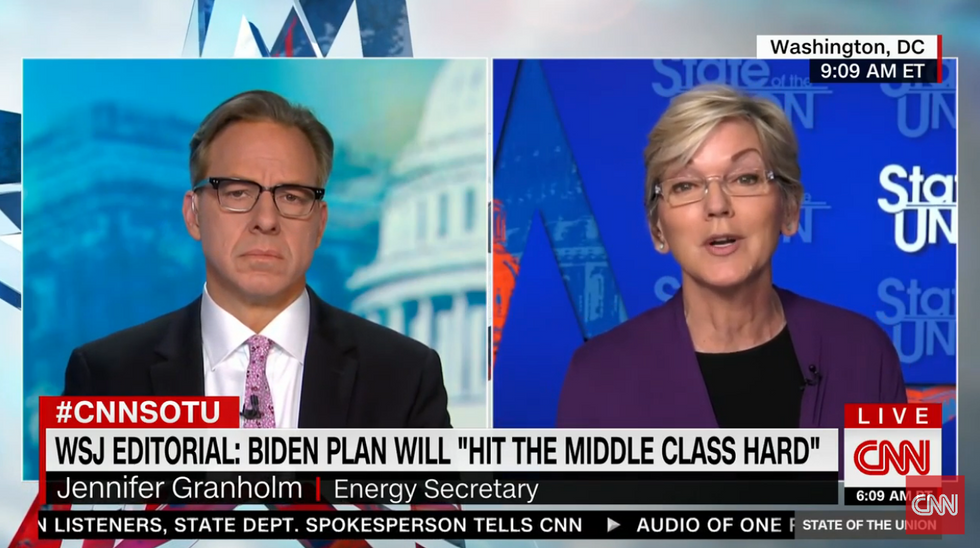 Secretary of Energy Jennifer Granholm didn’t deny claims over the weekend that tax hikes associated with the Biden administration’s more than $2 trillion infrastructure plan could have a ruinous economic effect on middle-class Americans.

During an interview on Sunday, CNN host Jake Tapper confronted the energy secretary on the issue, citing concerns among Republicans and moderate congressional Democrats about the economic impact of raising taxes.

In the lead-up to his question, Tapper specifically referred to a recent Wall Street Journal editorial that asserted the taxes would “hit the middle class hard — in the value of their 401(k)s, the size of their pay packets, and what they pay for goods and services.” He added that the U.S. Chamber of Commerce called the tax increases “dangerously misguided.”

To pay for the massive spending package — which goes far beyond funding highways, bridges, and roads to finance a laundry list of progressive political priorities — the administration has proposed the largest tax hike in almost three decades. One of the major changes getting media attention is a proposed increase of the corporate tax rate from 21% to 28%.

In response, Granholm remarkably didn’t raise an objection to the specific claim. Rather, she dodged the question by claiming the administration’s corporate tax rate figure is “fair” and a “reasonable middle.”

“You recall that just a few years ago the tax rate for corporate taxes was 35%,” Granholm said. “When Donald Trump passed his corporate and tax cuts for the wealthy package, he dropped it to a point that nobody was even asking for, which was 21%. So what Joe Biden is saying is, let’s put it to a reasonable middle. Let’s put us in line with other industrial nations, which is 28%.”

The energy secretary then hit back at criticisms by saying, “If you don’t like this, then come and tell us how you would pay for it.”

“Of the polling that’s been done out there on this, more people support paying for infrastructure rather than racking up deficits than not, and that includes Republicans,” she argued. “People know that you can’t just continue to spend without paying for it. And so what Joe Biden wants to do is to do it in a fair way.”

Earlier in the interview, Granholm made it clear that the administration would be perfectly happy to move the legislation through Congress without a single Republican vote, much like Democrats did with Biden’s $1.9 trillion coronavirus relief package. You can watch the full interview here: