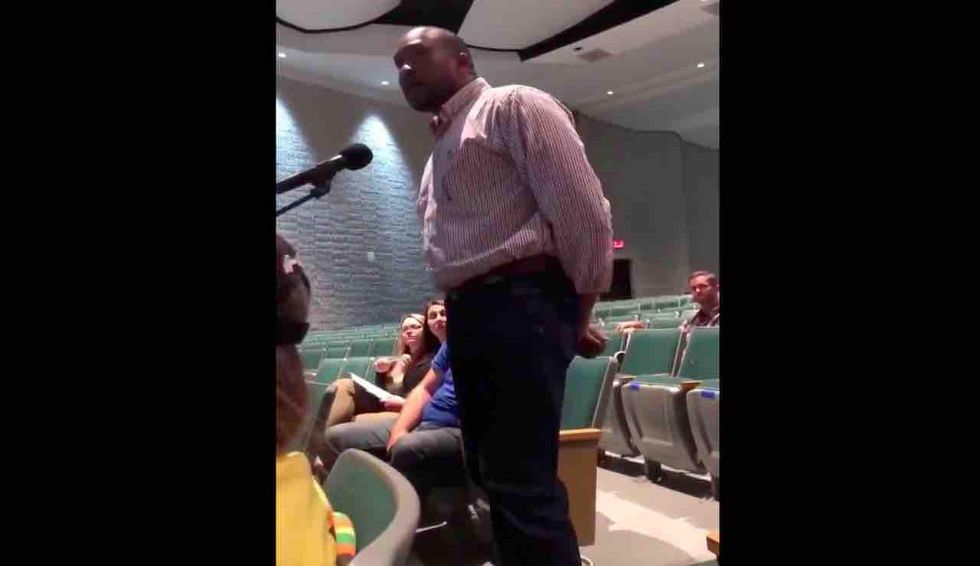 A father stood before a public school board recently and deftly destroyed critical race theory, not only saying it’s a concept meant for the collegiate level but also noting that it influences students of different races to “hate each other.”

The fact that Ian Rice is black matters a great deal because he also said, “Critical race theory is teaching that white people are bad. That’s not true. That would teach my daughter that her mother is evil.”

He told the board he has two children in the district.

“This board and this school district is failing,” Rice also said. “[Critical race theory] was never meant to be brought into grade schools, high schools — at all. It’s actually taught in the collegiate atmosphere — and more importantly the legal portion of the collegiate atmosphere to see different laws through the lens of race … from an ethical standpoint — not for grade schoolers and high schoolers.”

He added that “the problem with bringing it to the high-school and grade-school level is we don’t have the educators to properly teach these kids. Instead they’re using as their own agenda to indoctrinate the kids to hate each other.”

To make matters worse, Rice told the school board that at one point a staff member pulled his daughter aside and said, “Well, you’re a minority, so you know better than to engage in certain things.”

The assertion drew some gasps from meeting attendees — but not as pointedly as when he added that when the incident was brought to school’s attention, nothing was done to the educator — but instead his daughter was “ridiculed.”

He added that although there’s still “a long way to go,” racism and issues surrounding it are “nowhere near what they used to be decades ago.”

“But I believe the people here don’t look at me as a black man; they look at me as a man standing in front of you addressing the issue that we all are very passionate about,” Rice said in conclusion, after which applause broke out in the room.

Early in Rice’s remarks he mentioned his children are part of the “Caledonia school district.” It would appear he’s referring to Caledonia Community Schools in Michigan, as another parent posted video of her speaking at what appears to be the same school board meeting last month.

In the following clip, Angela Rigas also took the school board to task, saying it’s “going down the wrong path.” She ripped wearing masks and what she said was a proposal to test students twice weekly for COVID-19: “I’m sorry, but you are not my kids’ physician, and you will never, ever have permission to do any sort of medical procedure or test on my child.” Rigas’ words drew loud applause.

She also criticized the district’s “radical, progressive policies that are ruining our country” before bringing up critical race theory, saying “we are not for racism. If you took the CRT curriculum and took out the word ‘white’ every time you’re shaming a white person and replaced it with ‘black,’ you then would actually realize it’s racist … and it needs to stop.”

Is this a trend?

Last month, another black father — Ty Smith — took down critical race theory in front of an Illinois school board.

“You’re going to deliberately teach kids, ‘This white kid right here got it better than you because he white?'” Smith asked the board of Bloomington School District 87. “You’re going to purposely tell a white kid, ‘Oh, the black people are all down and suppressed.’ How do I have two medical degrees if I’m sitting here oppressed?”