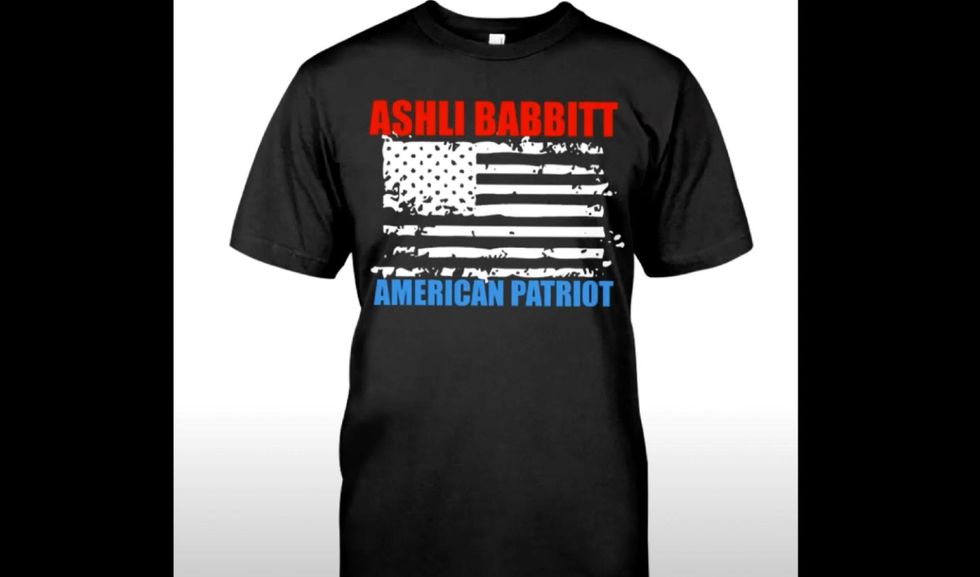 Social media users called for boycotts against Sears and Kmart over the last several days after a shirt depicting slain U.S. Capitol rioter Ashli Babbitt as an “American Patriot” was found to be for sale.

The item appears to have been placed up for sale by a third-party merchandiser and not licensed by Sears or Kmart, both of which are owned by Sears Holdings Corporation.

According to a Wednesday report from MarketWatch, the shirts have been available on the sites since January.

The shirt features a battered American flag with Babbitt’s name on top of the flag and “American Patriot” emblazoned below the flag.

Its presence on the stores’ respective marketplaces drew heavy criticism from social media, with many users calling for a boycott of the stores.

Rupar’s tweet drew thousands of comments, retweets, and calls for boycotts of both stores.

Sears issued a statement announcing that the product was removed from both Sears.com and Kmart.com following the outrage.

The response to Rupar’s tweet read, “Thank you for bringing this product to our attention. This item is no longer available for purchase on Sears.com or kmart.com.”

@atrupar Thank you for bringing this product to our attention. This item is no longer available for purchase on… https://t.co/ZQJpMcO9hg

Despite the company ultimately yanking the product from its virtual shelves, social media users continued to call for boycotts of both stores.

Journalist David Leavitt tweeted, “F*** YOU @sears and @kmart for selling shirts that calls the insurrectionist ‘Ashli Babbitt American Patriot’ Retweet if Sears and Kmart should go out of business.”

Washington Post columnist Gene Weingarten added, “Welp, no Sears and Kmart for me. Ashli Babbitt was a traitor. Deluded, perhaps. Naive, sure. Stupid, hard to argue. But she stormed the U.S. Capitol, menacing U.S. congresspeople, destroying property, challenging democracy and the rule of law.”

Welp, no Sears and Kmart for me. Ashli Babbitt was a traitor. Deluded, perhaps. Naive, sure. Stupid, hard to ar… https://t.co/5tLl2fDASz

Writer Tara Dublin tweeted, “Holy Not Okay, @sears & @kmart. I know you cater to the lowest common denominators, but this is abhorrent. Can anyone try to be better, or have we all given up as a society? JFC[.]”

Holy Not Okay, @sears & @kmart. I know you cater to the lowest common denominators, but this is abhorrent. Can anyo… https://t.co/wBOkgpzHGF

Babbitt, 35, an Air Force veteran and Trump supporter, was shot by a Capitol Police officer while climbing through a broken window on a door leading to the Speaker’s Lobby during the riot at the Capitol on Jan. 6.