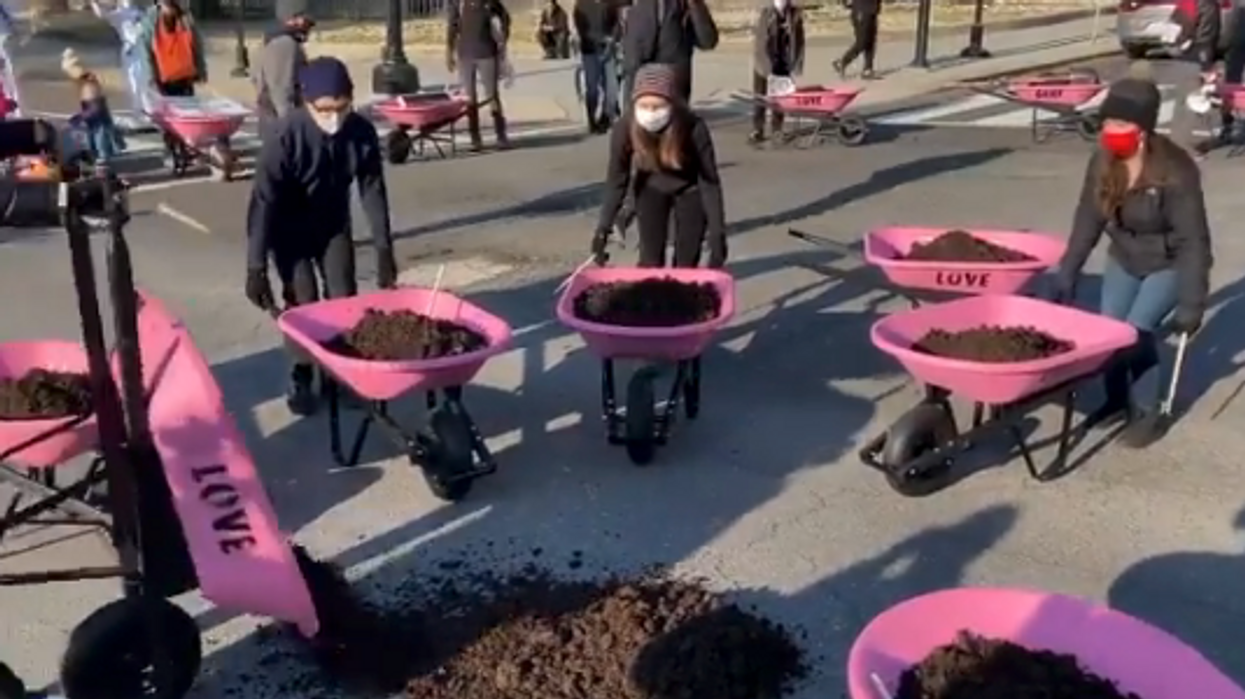 A group of climate activists gathered in Washington, D.C., on Thursday to literally make a stink about President Joe Biden’s environmental plan ahead of the White House summit on climate issues involving 40 world leaders.

Videos and photos circulating online of the Earth Day demonstration show activists wheeling pink wheelbarrows containing cow manure downtown toward the White House before dumping the contents in a pile onto the street.

In all, about 15 wheelbarrow loads of manure were dumped into a pile before a sign saying “stop the bulls**t” was planted on top, the Washington Examiner reported.

A spokesman for the activist group, called Extinction Rebellion, told the outlet they were protesting Biden’s plan to cut carbon emission by 50% of 2005 levels by 2030, which he argued was not nearly enough to ward off catastrophic environmental consequences.

“His plan to reduce carbon emissions by at least 50% by 2030, long after he’s out of office, is too little, too late,” the spokesman reportedly said. “We need net-zero carbon emissions by 2025. Anything else guarantees climate destruction and nails the coffin shut for millions across the globe.”

Climate activists from Extinction Rebellion dumped cow manure outside of the White House in protest of President Bi… https://t.co/kPlrrzSfmI

While dumping the manure, the activists were heard chanting, “As you bulls**t us, time is running out.” Another sign on display at the event read, “Declare Climate Emergency Now!”

Washingtonian writer Jane Recker reported that after dumping the manure, the activists dispersed without cleaning up their mess.

In remarks at the virtual summit, Biden framed the climate crisis as “the existential crisis of our time.”

The summit, according to The Hill, was riddled with technical difficulties. While Vice President Kamala Harris delivered remarks, her voice echoed on the live feed making it difficult for anyone to hear. A similar echo occurred at times during Biden’s remarks, as well.

United Kingdom Prime Minister Boris Johnson was also affected by audio issues. The outlet reported that his remarks were “interrupted by dial sounds, as if someone were pressing phone keys near his microphone.”

Perhaps the funniest moment, however, occurred when it was time for Russian President Vladimir Putin to speak. U.S. Secretary of State Antony Blinken had cut away from French President Emmanuel Macron because his speech was originally not accompanied with English subtitles and opened the floor to Putin. But the Russian president was apparently not aware of the transition.

“‘The floor is now to the President of the Russian Federation,’ Blinken said after several moments of silence, as Putin continued to shift in his seat, seemingly unaware that attention had turned to him … More than a minute later, Putin began giving his remarks,” The Hill reported.