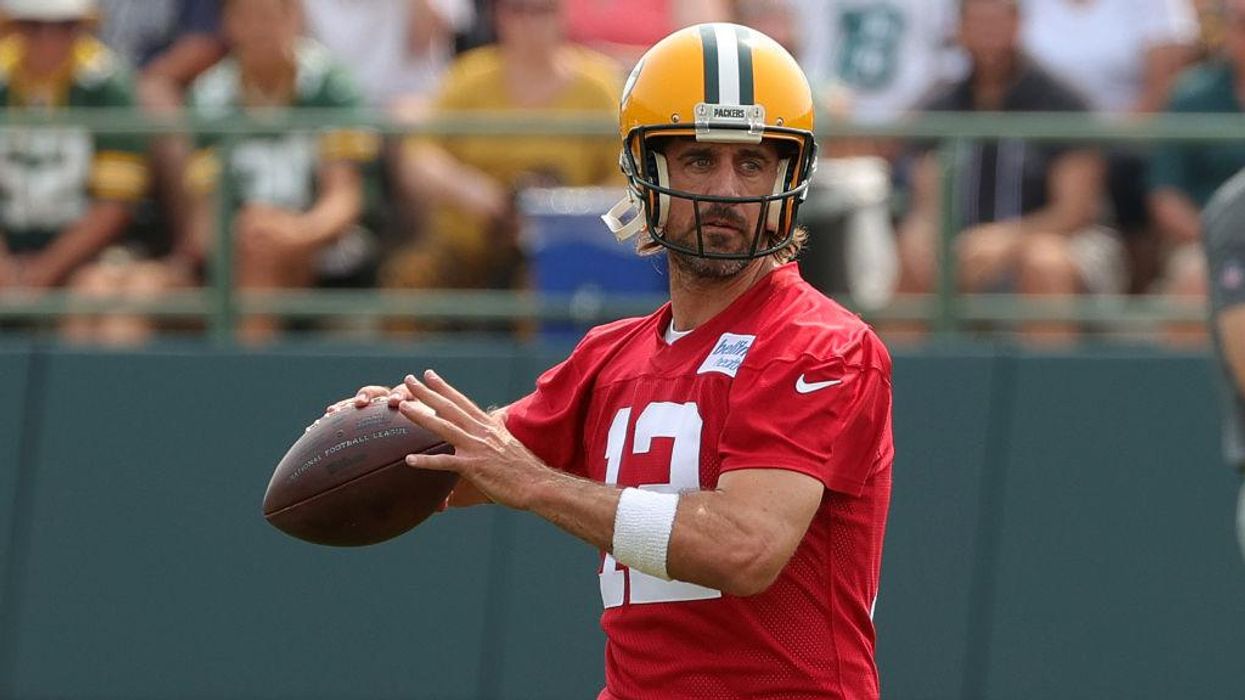 Sports reporters are cheap dates. Shower them with a little time and attention, and they turn to mush. That’s the only explanation for their reaction to Aaron Rodgers Wednesday.

He talked to reporters for 30 minutes, and just like that, the media declared him the winner of his standoff with the Green Bay Packers.

Rodgers spent the off-season in a temper tantrum, angry about so many things. He didn’t want to play for the Packers any more and was going to hold his breath until he got his way.

Final details of his newly amended contract haven’t been released. It appears that Packers management gave up nothing that it wanted.

This was supposed to be the off-season of the quarterback. They were looking to elevate their diva status following the LeBron James model. Top quarterbacks around the league demanded trades, refusing to play any more for their current teams. They saw LeBron do it and win championships. And then they saw Tom Brady do it in the NFL, going from New England to Tampa Bay, creating his own team, winning the Super Bowl.

Brady brought with him his longtime New England teammate tight end Rob Gronkowski, along with receiver Antonio Brown. They would combine to score three touchdowns in the Super Bowl.

If you can’t build it, buy it.

To make that sort of demand is to declare: We’re in charge here. And maybe that works for superstars in the NBA; it didn’t work out in the NFL.

Practices are starting, and Rodgers is still with the Packers, Russell Wilson still in Seattle, Deshaun Watson still in Houston. Matt Stafford left Detroit for the Los Angeles Rams, but that was by mutual agreement. Even the Lions figured that Stafford had served his sentence with the franchise and deserved to be cut free.

So what happened? Well, no matter how big a star attraction the NFL quarterback is, the owner still has all the money, and the organization has all the power.

What happened to the great quarterback carousel that was supposed to happen? Twenty starting quarterbacks were supposed to move. Remember? Instead, it was all about Andy Dalton, Carson Wentz, and Teddy Bridgewater.

Rodgers was the biggest loser of the A-listers who wanted a trade. He returned and made it sound as if the Packers had made him concessions. The big one was that he wanted to be at the table for personnel decisions that affect his ability at quarterback.

“I think we can all understand Green Bay isn’t a huge vacation destination,” Rodgers said. “People come here to play with me, to play with our team and knowing that they can win a championship here. And the fact I haven’t been used in those discussions was one I wanted to change moving forward.”

Then Rodgers admitted he wasn’t sure the Packers had made that concession to include him in the discussions at all.

It’s also not easy to convince free agents to come play with you when you make it appear that your return is a one-year thing.

The Packers did trade to re-acquire receiver Randall Cobb from Houston. Cobb was a Rodgers favorite, and reports were that Rodgers demanded that move.

They still have Jordan Love at backup QB, too. Love was a sore point for Rodgers when the Packers surprisingly picked him out of Utah State in the first round of the 2020 draft.

Rodgers wanted another receiver or lineman, and the Packers took his eventual replacement instead.

Rodgers huffed, not only because of the pick but also because Packers management hadn’t consulted him on it.

So he said at the time that he felt like a lame-duck quarterback and complained that the Packers wouldn’t commit to him past 2021. His contract runs through 2023, but the guaranteed money stops after 2021.

Several reports say that the Packers agreed to drop the 2023 season from Rodgers’ contract if he came back. So if he isn’t happy after this season, then they’ll explore a trade.

These are minor concessions. Rodgers was upset that the Packers wouldn’t commit to him for the long term and then convinced the Packers to cut his contract short, as he moves into his 40s.

The truth is, Rodgers had no leverage. He was still under contract, and if he had retired, then he would’ve owed the Packers at least $23 million that he’d been paid in his signing bonus. He could have sat out at a cost of $50,000 a day.

He demanded a trade and the Packers refused.

So it’s hard to see what Rodgers got out of this. He did humiliate Packers management a little, making them squirm and come to him and kiss his ring.

Rodgers humiliated himself even more with his petulance, traveling around the country, hosting “Jeopardy” and making A-list appearances at the Kentucky Derby, among other places. He posted a video of himself playing guitar and singing on the beach in Hawaii.

It was all a show for Packers management. He was showing them who’s boss.

On Tuesday, the boss came crawling back to Green Bay, tail between his legs. Reporters celebrated it as a victory march.