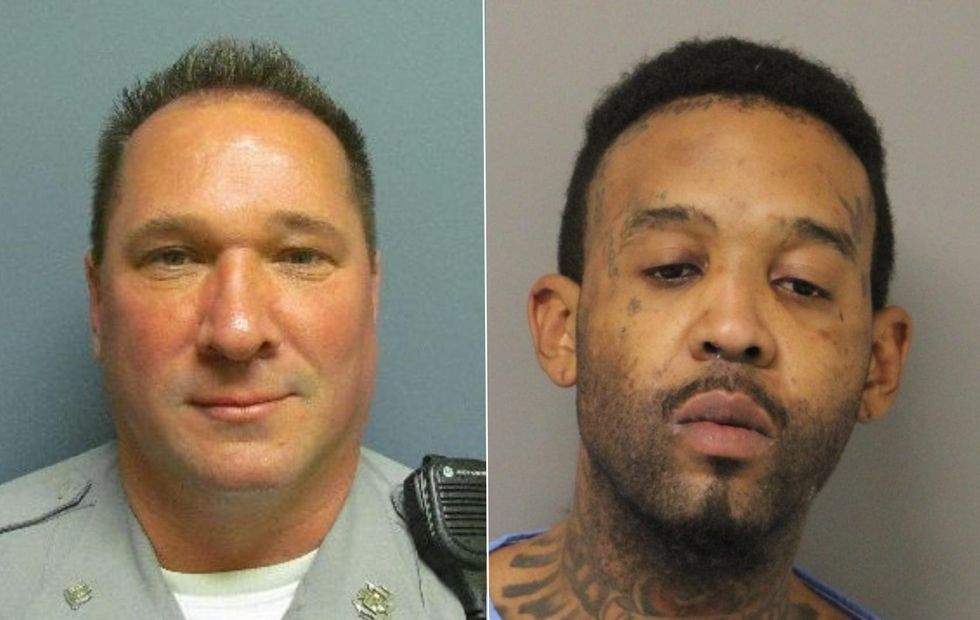 Authorities arrested a 30-year-old suspect in connection with a brutal attack on a Delmar, Delaware, police officer.

The suspect also reportedly attacked two elderly neighbors in what is believed to be a related crime.

The attack comes as the department suffers a lack of funding and available resources for police and law enforcement officials.

A news release from the Delaware State Police said the incident unfolded following a call over a fight in a house in Delmar’s Yorkshire Estates community.

Wilkerson, the DSP reported, was reportedly fighting with other residents of the home and destroying property, which prompted the initial call. Dispatchers soon received a second phone call reporting that the elderly victim and his wife had been attacked by the same suspect.

Following the initial call, Cpl. Keith Heacook of the Delmar Police Department arrived on the scene around 5:15 a.m. local time and was believed to have immediately met with a physical confrontation.

A source — who has worked in local law enforcement for more than two decades and requested anonymity — told Blaze Media that a missed 10-minute welfare check triggered dispatchers to send more officers to the scene to check on Heacook.

When a Wicomico County Sheriffs Office Deputy and a Delaware State Trooper arrived at 5:50 p.m, the source said that the two reportedly discovered an unconscious Heacook in a pool of blood, having apparently been bludgeoned with his own baton, which was missing from its holster.

The source told Blaze Media that Heacook — who was believed to have been overpowered — was repeatedly hit so violently that there was a dent in the officer’s forehead.

“There was blood everywhere,” the source added.

Officers discovered the suspect at a home across the street from where Heacook’s unconscious body was left, having reportedly attacked an elderly couple with an object the source believed to be a glass bottle. The elderly woman, whom the source identified as a dementia patient, was said to have lost several teeth during the attack as well as a fractured orbital. Both elderly victims suffered significant injuries as a result of the attack and were transported by ambulance to area hospitals. The female victim was later transported to Shock Trauma in Baltimore.

The source told Blaze Media that the suspect was believed to have fled to the elderly neighbors’ home in search of a gun, presumably to either finish off Heacock or perhaps confront responding officers. The suspect, the source said, was unable to find a gun, and reportedly jumped from a second-floor window. The DSP reported that officers discovered Wilkerson walking on the rear of the elderly victims’ property and was taken into custody without incident.

Heacook was ultimately transferred to the Shock Trauma Unit in Baltimore, Maryland, for treatment of a traumatic brain injury and other injuries. He continues to fight for his life at the time of this reporting.

He was booked into the Sussex Correctional Institution on $451,000 cash bond following his arraignment. The source told Blaze Media that Wilkerson had been arrested more than 30 times since 2010. Indeed, a search in the Maryland Judiciary Case portal returned at least 38 arrests in Maryland alone, including arrests for assault, burglary, theft, trespassing, and more.

The Delaware State Police are handling the investigation with the assistance of other local and state law enforcement.

“Corporal Keith Heacook is a 22-year veteran and has been employed with our department since 1998,” PIO Master Cpl. Gary Fournier said in a statement. “He is a husband, son, brother, and father. Keith is fighting for his life right now and he needs your prayers along with the elderly couple who were also injured. Members from the Delmar Police appreciate the outpouring of community support as we continue to move forward. We appreciate the support from the Delaware State Police, Wicomico County Sheriff’s Office, Maryland State Police, and all other agencies who responded and are assisting with this investigation.”

The source told Blaze Media that Heacook — who he described as a good police officer, a “very gentle man,” and a person who never even raised his voice — was close to retirement.

The Bank of Delmarva has a designated account named “The Community” for anyone who wishes to donate to Heacook and his family. For more information on how to donate, contact the bank at 410-548-7892 or 800-787-4542.

A Monday WMDT-TV report highlighted the vast concern in what many area residents and lawmakers say is major underfunding for the local police following Heacook’s attack.

WMDT’s Jordie Clark wrote, “Although it’s not uncommon for smaller municipalities to only have one officer on duty, the addition of another officer or even quicker back up was needed in the situation, according to officials. Some even say, the outcome of this fight could have been very different if other officers had been there.”

Maryland State Delegate Carl Anderton — who is also former mayor of neighboring Delmar, Maryland — told the station, “This is what happens when you’re allowed to have single officer shifts, and we should never be in this situation.”

Jamie Leonard, president of Delaware’s Fraternal Orders of Police, added, “The problem with a place like Delmar outside of the fact that they have this kind of two-state leadership, is that their pay is low.”

“You have to increase funding somehow, that funding and that trickle-down can’t just be used to hire more police,” Leonard added, “you have to provide a competitive wage to the officers that are already there.”

Delmar, which straddles the Delaware-Maryland state line, is forced to “strategically place officers” since they have “more space to cover,” Clark adds.

Delmar, Delaware, Mayor Karen Wells told the station that few people are even applying to be officers in the area this days.

“Quite frankly, who would want to be a police officer right now,” Wells said. “That’s the hardest thing I think we’re facing.”

Anderton added, “After [Heacook recovers] I think it’s up to the two mayors Delmar, Maryland, and Delmar, Delaware, to come together and figure out how they’re going to move the department forward.”

Wells said, “We will have to look into what we can do to make sure that this doesn’t happen again. I mean that’s all there is to it.”