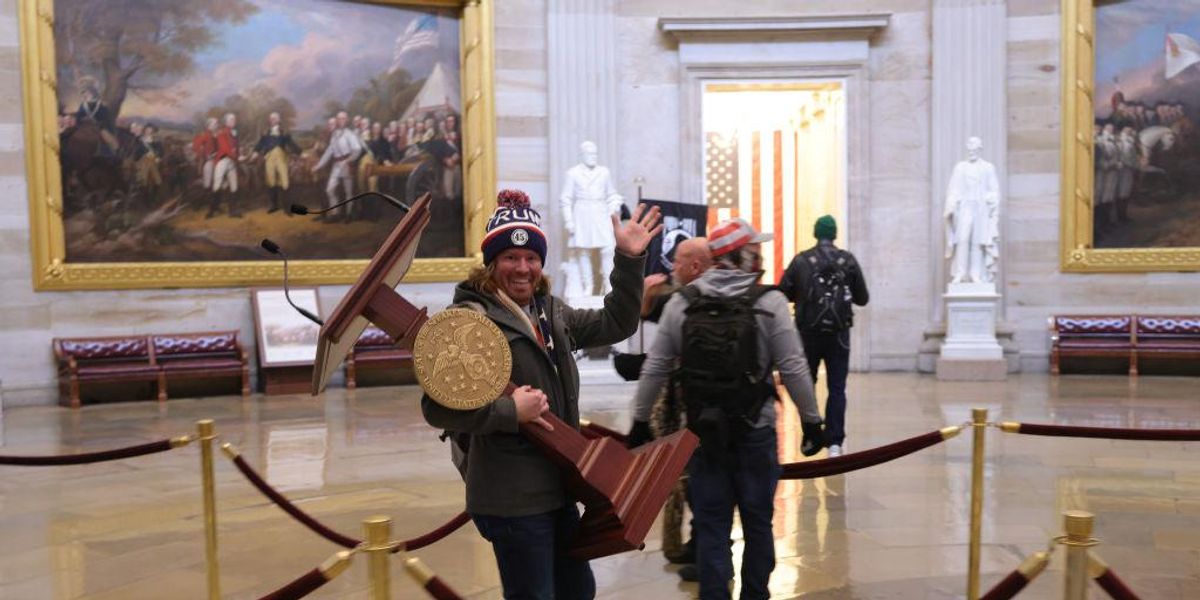 Several left-wing commenters have dared to make the brash comparison between the terrorist attacks that rocked the nation on September 11, 2001, with the riots on January 6, 2021, at the U.S. Capitol. Some left-leaning pundits went so far as to proclaim that the Capitol riots were more dangerous than the 9/11 terror attacks that killed nearly 3,000 Americans and the more than 1,000 New Yorkers are believed to be inflicted with cancers related to the World Trade Center attack. The brazen comparison has incensed families of those who lost loved ones from the deadliest attack on American soil.

Democratic lawmakers, including House Speaker Nancy Pelosi (D-Calif.), have called for a “9/11-style” commission to investigate the Capitol riot.

“To me, though there was less loss of life on Jan. 6 – Jan. 6 was worse than 9/11 because it’s continued to rip our country apart and give permission for people to pursue autocratic means,” Dowd claimed during an appearance on the left-wing cable network MSNBC.

Dowd then claimed, “I think we’re in the most perilous point in time since 1861 and the advent of the Civil War.” far-left MSNBC host Joy Reid agreed, “I do too.”

This is absolutely BONKERS and offensive to the thousands murdered on 9/11.

Lincoln Project co-founder Steve Schmidt agreed with Dowd that the Jan. 6 Capitol riot was worse than the 9/11 terror attacks that ignited multiple wars, where thousands of U.S. troops died.

“He couldn’t be more right,” Schmidt said of Dowd’s assessment. “The 1/6 attack for the future of the country was a profoundly more dangerous event than the 9/11 attacks. And in the end, the 1/6 attacks are likely to kill a lot more Americans than were killed in the 9/11 attacks, which will include the casualties of the wars that lasted 20 years following.”

The Defense Department estimates 2,442 U.S. troops have been killed and 20,666 have been wounded in the war since 2001, as well as 3,800 U.S. private security contractors who have been killed, according to an Associated Press report from April.

Huffington Post White House correspondent S.V. Dáte said the Capitol riots were “1000 percent worse” than the 9/11 attacks that flew passenger-filled airliners into the Twin Towers in New York City, another into the Pentagon in Washington, D.C, and a fourth commercial plane that was likely intended to be smashed into the White House or the U.S. Capitol; the fourth suicide attack was thwarted by brave passengers, causing the plane to crash near Shanksville, Pennsylvania.

“The 9/11 terrorists and Osama bin Laden never threatened the heart of the American experiment,” Dáte stated. “The 1/6 terrorists and Donald Trump absolutely did exactly that. Trump continues that effort today.”

The 9/11 terrorists and Osama bin Laden never threatened the heart of t… https://t.co/NOjA4CmfBo

Families of 9/11 victims vehemently disagree, and are outraged that such a comparison would even be made for political gain. Retired New York Deputy Fire Chief Jim Riches is offended by those who say that the Capitol riots were worse than 9/11. Riches’ son, Jimmy, was among the 343 New York firefighters who perished at the World Trade Center on September 11, 2001.

“Are they kidding me? 3,000 people died, plus we have more people dying from the air that was down there,” Riches told Fox News. “They’re comparing it to score points politically. The families are really [angry]. When I talk to them, when they compare it to that, they find that outrageous.”

Debra Burlingame lost her brother during the Sept. 11 attacks. He was one of the pilots of American Airlines Flight 77, which was hijacked by terrorists and crashed into the Pentagon.

“It’s unfortunate because we’re coming up in the 20th anniversary,” Burlingame said. “There are a lot of young people who have no living memory of 9/11 … When you have all these comparisons and analogies, which are inflated and ridiculous, it minimizes what actually happened, and that’s what’s happening here. It’s a deliberate ploy.”

Burlingame penned a Wall Street Journal op-ed about the offensive comparisons, and wrote, “It is deeply offensive and sad that the brutal and harrowing memories of the worst terrorist attack in American history are being deployed by political partisans.”

Steven Schlag died in the World Trade Center, and his cousin Joe Connor says the comparisons are being made to “dehumanize our families for political gain.”

“I guess they call it gaslighting,” Connor said. “They can say these things that will make people believe that these riots were worse than the worst thing that happened on American soil. Either they’re ignorant or they’re just really devious and clever, and you can put nothing past them, because if you’re willing to lie to that degree … It’s a disturbing trend to me.”

“I saw people jumping out. I saw the sides of the buildings explode. I saw papers floating in the wind, and I tried to call my cousin,” Connor, who saw the Twin Towers fall, said. “No one picked up … The terror, the carnage, the horror of 9/11, 20 years ago. They’ve forgotten or they think the rest of us have forgotten.”