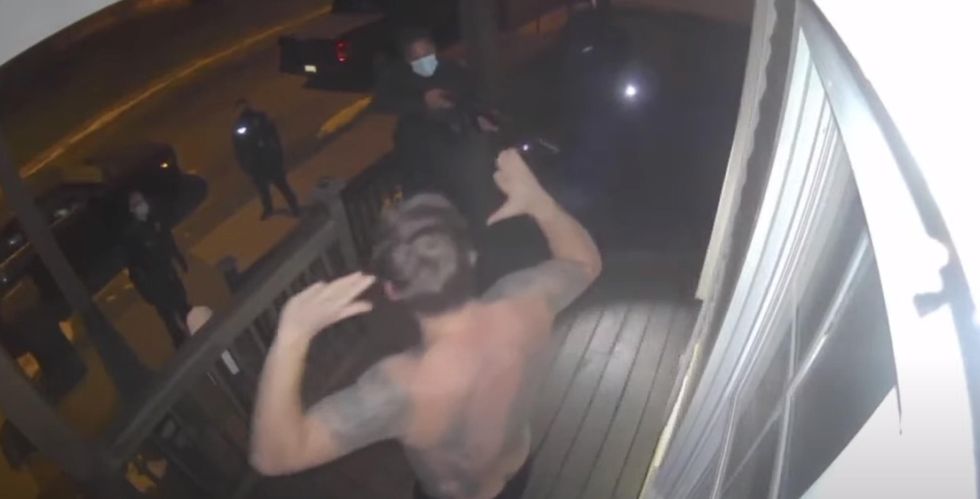 A man and his family were held at gunpoint by out-of-state bounty hunters who searched his home in western New York allegedly without a warrant and he’s filed a federal lawsuit over the outrageous incident.

Even more alarming was that officers from the Buffalo Police Department assisted the men but did not appear to know much about what official authority they had in the raid.

Security video captured the moment that Jake Reinhardt was dragged out of his home at gunpoint by the bounty hunters.

Reinhardt says that they asked him about a relative who never lived at that address, and then proceeded to raid his home.

At one point, he asks if they have a warrant, and they say they do, but they do not produce it.

Reinhardt said that he told them that his wife and his three-year-old daughter were in the home, and they proceeded to search the home with guns drawn.

The men then continued their search into a rental apartment above Reinhardt’s first floor home.

Footage from that family’s baby cam shows the men with guns drawn searching their baby’s room.

Video from outside captured the police officers wondering aloud what agency the men were associated with.

“I don’t even know what agency that is either,” said one officer.

The bounty hunters were unable to find the person they were looking for, and they eventually left with the Buffalo police.

Reinhardt has filed a civil lawsuit in federal court over the violation of his civil rights.

“This is the absolute worst I’ve ever seen,” said his attorney, R. Anthony Rupp.

The bounty hunters, who were from Lebanon, Pennsylvania, released a statement explaining and defending their actions to WKBK-TV:

When credible information is received concerning the fugitive’s whereabouts, agents work with local police to locate and detain the fugitive.

A source with the Buffalo Police Department told WKBK that they had no official policy related to bounty hunters.

“If bail bondsman are allowed to do what our local police department can not do—and that is to enter a house without a warrant,” said Pridgen, “from what I’m being told, it could be any house.”