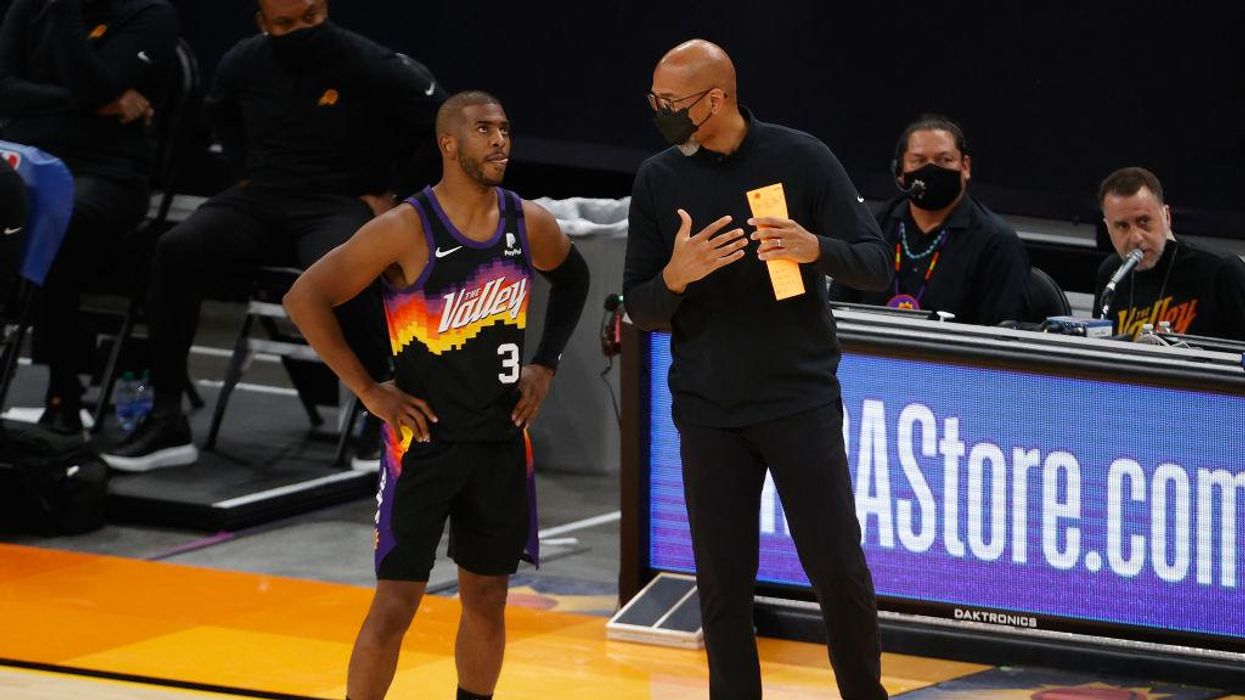 You should be watching the NBA Finals.

The NBA has let us down. Its full-on embrace of the Marxist-fueled Black Lives Matter movement in the aftermath of George Floyd’s death soured my passion for professional basketball. I skipped last year’s playoffs and never watched a full regular-season game this season.

I watched the first round of this year’s playoffs solely because I wanted to see LeBron James lose. Once that happened, I started watching all of the games.

These playoffs have been joyful and super exciting. For the most part, the TV commercials don’t annoy me.

But the real reason to watch is that God placed a messenger inside the NBA’s secular madness. Monty Williams might be the most important man in sports. The 49-year-old former Notre Dame and NBA player is the leader and example America needs.

Last night, Monty’s squad took a commanding 2-0 lead in its best-of-seven series against the Milwaukee Bucks. The Suns are just two victories away from giving Phoenix its first NBA title and expanding Williams’ platform to expound on the power of Jesus’ gospel.

Do you know the Monty Williams story? It belongs in a new Bible.

Five years ago, a 52-year-old white woman high on meth drove her car head-first into the car driven by Williams’ wife, Ingrid. Three of Williams’ five children were also in the car. The white woman died at the scene of the accident. Ingrid Williams died a day later. Williams’ children survived.

A week later, Monty Williams stood at his wife’s funeral and delivered the most amazing seven-minute eulogy and testimony I’ve ever heard. He started with scripture.

Psalms 113:1, “Behold how good and pleasant it is when brothers dwell in unity.”

He then shared the story of the doctor who told him, as an 18-year-old freshman at Notre Dame, that if he continued to play basketball, he would die because of a heart condition. His wife, then his girlfriend, Ingrid, told him, “Jesus can heal your heart.”

Williams played in the NBA for a decade.

He closed his wife’s funeral by asking his family and friends to pray for the family of the driver who killed his wife.

“Now, I’m gonna close with this, and I think it’s the most important thing that we need to understand,” Williams began. “Everybody’s praying for me and my family, which is right. But let us not forget that there were two people in this situation. And that family needs prayer as well. And we have no ill will toward that family.

“That family didn’t wake up wanting to hurt my wife. Life is hard. It is very hard. And that was tough, but we hold no ill will toward the Donaldson family, and we as a group, brothers united in unity, should be praying for that family, because they grieve as well. So let’s not lose sight of what’s important.

“God will work this out. My wife is in heaven. God loves us. God is love. And when we walk away from this place today, let’s celebrate because my wife is where we all need to be. And I’m envious of that.”

When the Suns won the Western Conference Finals two weeks ago, Williams explained to an ESPN interviewer the foundation of his success as a coach.

“I expressed from the time I got the job in Phoenix and to every new player that comes to our program, the essence of my coaching is to serve,” Williams said. “As a believer in Christ, that’s what I’m here for. And I tell them all the time, if I get on you, I’m not calling you out, I’m calling you up.”

It’s not just Williams. The same night, Phoenix star Chris Paul shared with ESPN that he’s written the title of a gospel song on his shoe for the past year. It’s a song by the group Mary Mary. It’s called “Can’t Give Up Now.”

This Phoenix team is special. It’s not a coincidence that they’re playing the Bucks in the Finals. Milwaukee is the team that walked out of a game last year and shut down the “bubble” in protest of the shooting of Jacob Blake in Kenosha, Wisconsin.

The players on the Bucks are not bad guys. They’re young, emotional, and obsessed with social media. They’re no different from most young people. They’re not based in a higher understanding of the world.

They don’t have someone like Monty Williams showing them the light and the way.

Maybe the Bucks will climb out of this 0-2 hole and win the NBA title. Who knows? I can’t predict the future. But I’m going to enjoy these games, pray that Williams and Paul win it all, and hope that their message is shared and understood.

You should join me.