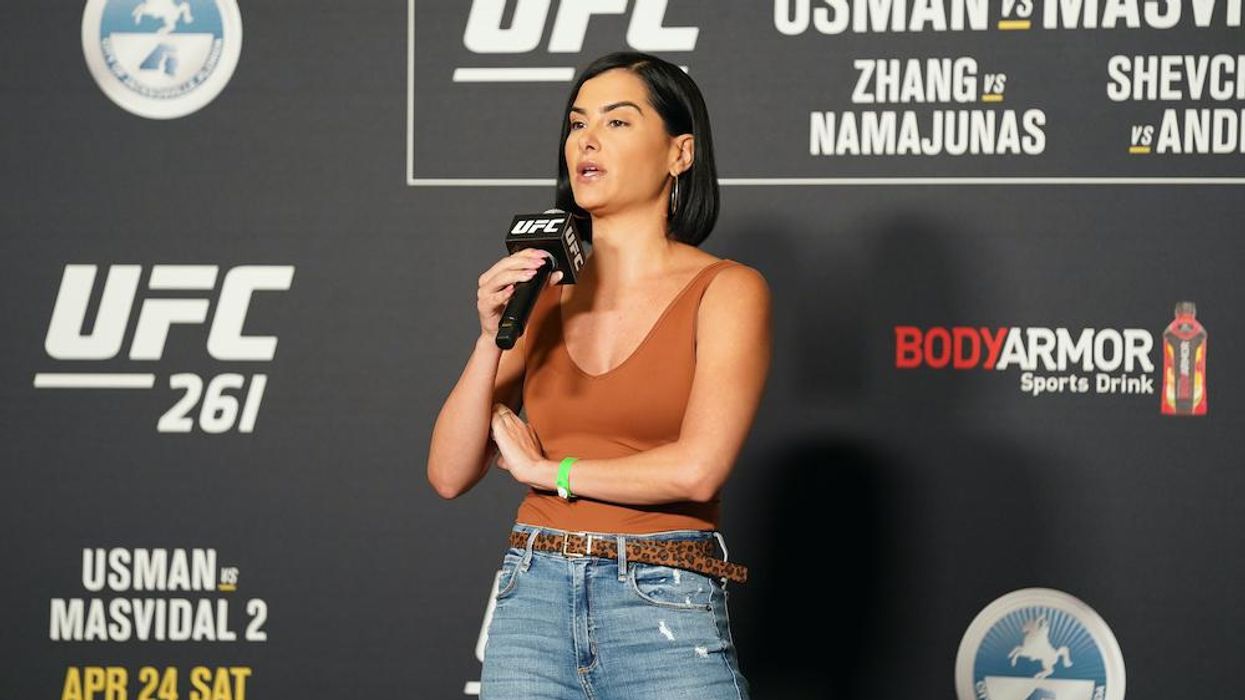 Megan Olivi covers one of the most brutal sports in the world for ESPN.

The UFC is the world of the strong, powerful, and tough.

The world of UFC media coverage apparently does not have nearly the same sort of standards if the latest outrage de jour from the cable sport network’s sole female member of its UFC coverage team is any indication.

In late March, the New York Post
pointed out, ESPN star Stephen A. Smith bragged on Twitter about the network’s UFC coverage team, which he called the “best @ufc coverage in the world.” In the tweet he tagged Daniel Cormier, Joe Rogan, Jon Anik, Chael Sonnen, and a number of other reporters and analysts.

But he did not tag Olivi.

So she
replied, “Ummm hey there – you’re forgetting someone” and included a smiling emoji.

Fast-forward one month: Last weekend, during a Friday presser before Saturday’s UFC 261, a reporter brought up the Smith slight to Olivi..

Olivi declared that she was “genuinely … hurt” when Smith did not tag her in the tweet and that the whole ordeal was a “tough” thing for her to go through.

“I don’t love social media in general, but then to play such a big role in terms of pre- and post-fight interviews — like, I’m the one on site doing them — and then to do all the hits on the broadcast and be a part of this team and be literally the only women on the pay-per-view team,” she began. “There’s not a female desk host, there’s no one on the pre- or post-show. It’s literally just me, and I’ve worked to be here.

“I wasn’t handed this,” Olivi continued. “This has been a very long journey, as I’m sure people who have seen me 10 years ago, can attest to. And I’ve done everything the right way to get here, and to not get the acknowledgement as my male colleagues got, I genuinely was so hurt.”

Olivi said that such treatment is “something the women in this room have dealt with before and will have to continue to deal with.”

Though she said this problem is one that Smith it going to have to work himself, she did say she doesn’t “think he did it on purpose.”

“I don’t think there was any malintent,” Olivi told reporters. “I don’t think he was trying to be rude by any means — I just think it didn’t really didn’t matter to him.”


Megan Olivi was ‘genuinely so hurt’ by Stephen A. Smith’s tweet | UFC 261

The Post noted that, though Smith has not commented on the supposed controversy, he did include Olivi in a tweet two days later giving “props once again” his network’s UFC coverage team.