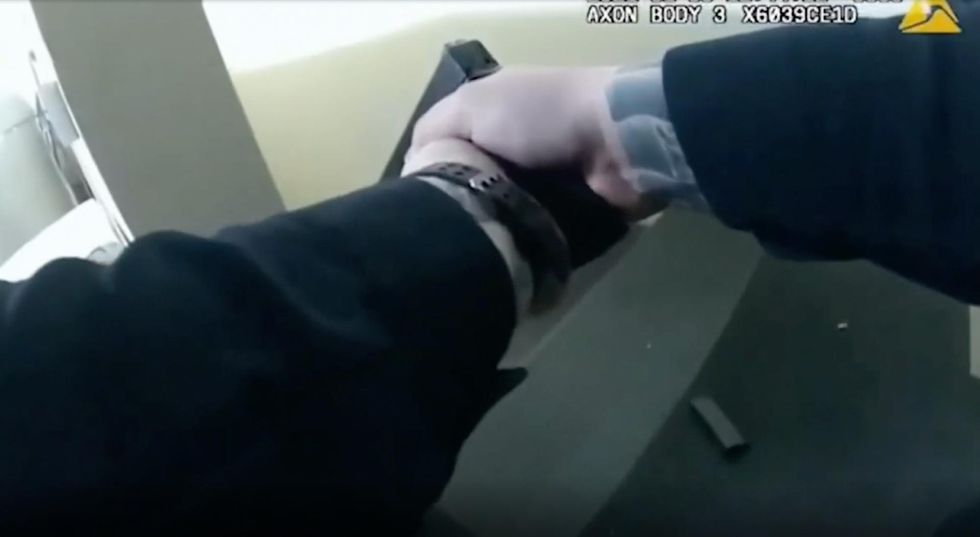 The incident took place in January, and TMZ published the video on Wednesday.

According to the outlet, the Baltimore Police Department arrived on the scene of a Compare Foods supermarket in the city while responding to reports that a security guard was walking around with his gun out.

In the beginning of the video, you can hear an unidentified male saying what appears to be, “He’s got a gun … he’s upset, he ain’t got his check.”

“You see 2 cops walk into the store as bystanders tell them a security guard is walking around with his handgun out,” the outlet reports. “Then all of a sudden gunshots rang out, sending the officers ducking for cover.”

Almost immediately, the chaos begins, and in the first 30 seconds of the video, at least 22 gunshots are exchanged between responding officers and a person who is presumed to be the guard.

TMZ reports, “One officer returned fire, and the shootout continued as he scrambled to find a better position — he eventually made his way up a flight of stairs to a room filled with terrified workers.”

Authorities say that a 20-year-old male was shot in the arm during the disturbing shootout.

The suspect, 34-year-old Dontae Green, fled through a back door.

A week after the incident, U.S. Marshals tracked him down and engaged in another shootout with the suspect. He was fatally shot during the encounter.

According to WJZ-TV, a U.S. Marshal was seriously hurt during the shootout.

“On February 4, marshals tried to arrest Green at a home in the 1500 block of North Mount Street” WJZ reported. “Green, who was hiding in a closet, opened fire on the marshals, who returned fire and hit him, officials said at the time. One marshal was critically injured and put on life support; he was released from the hospital last Tuesday and continues recovering at home.”

An earlier report from WJZ states:

People who knew Green said he’d lost $500 last week, and when people started to tease him that one of his coworkers actually [sic], he apparently held up the store in a desperate move to get his money back.

People who knew or worked with Green said he was a good person and he had no issues until his money allegedly disappeared last week.

“Donta [sic] was not just security there, he did, he might’ve did four or five other jobs that one guy can’t do,” one person told WJZ.