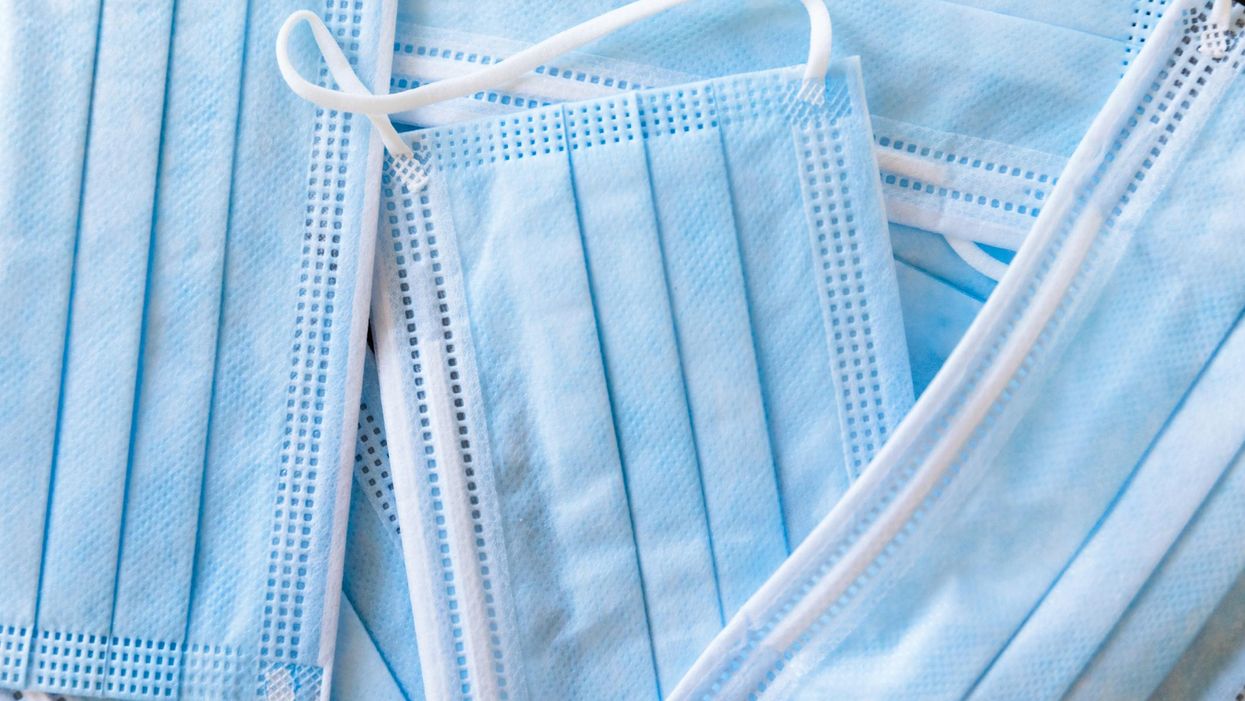 Mask-wearing was likely the greatest failed social experiment of our lifetime. Yet its own failure means it continues to be forced down our throats … or noses.

While it was always
illogical that a cheap mask could stop a virus that is much smaller than the mask’s pores, we embarked on a grand national experiment with a greater degree of compliance and shame than anyone could have imagined. On June 9, 2020, Reuters ran a headline, “Widespread mask-wearing could prevent COVID-19 second waves.” The outlet suggested, based on a mathematical equation presupposing that masks work, that “even homemade masks can dramatically reduce transmission rates if enough people wear them in public.”

Well, the media got their wish more than they could ever have imagined, yet nowhere in the world did it stop the next wave or the one after that. That should have been the end of masks, but instead, we have allowed the global governments to continue lying to us when our own eyes can see masks failing to work in the real world. They are still trotting out theoretical studies or lab simulations of particles to hypothesize that masks might work, over a year after they failed to work on us humans when it mattered.

As the CDC attempts to resurrect universal masking in America, it’s important to remember all the times the media suggested masks were the cause of the sudden drop in cases, when in fact cases increased with greater intensity later on – months into universal masking. In their minds, masks are immaculate and can never be proven ineffective.

In reality, as we’ve come to learn over the past 17 months, the virus saturates a given area for 6-8 weeks and then moves on, until the next wave a few months later. Nothing we do can prevent either the up-slope or down-slope of the curve.

Given the acuteness of the political amnesia, here is a reminder of just a few times the media credited masks for a decline in cases, only to have it blow up in their faces. This is built on the incredible research of the indispensable
Ian Miller:

Perhaps the greatest illustration of the insanity of responding to the Delta mutation with masks is that the entire mutation emanated from India, 100%
after the media had praised the country for ending its first wave in the fall with masks. “The country has managed to encourage and enforce almost universal acceptance of masks without much debate,” wrote the Wall Street Journal on December 30 in an article titled, “Covid-19 Was Consuming India, Until Nearly Everyone Started Wearing Masks.”

In case you needed more evidence of how completely irrelevant mask wearing is, India had 81% mask compliance in Feb… https://t.co/A5vgw4fnVl

“Until you have a vaccine, you have a social vaccine, and the social vaccine is the mask,” Health Minister Harsh Vardhan repeated in speeches. Well, the cruel irony is that the mask-wearing failed to stem India’s very sharp incline in March, and it wasn’t the vaccine that precipitated the sharp decline in cases two months later. India barely had anyone vaccinated at the time.

Well, certainly the Czechs did it right by instituting a mask mandate early on. That is most certainly why they barely had a problem until the fall of 2020, right? Wrong! Masks “worked” until they didn’t work. On October 19, CNN published a bizarre article
titled, “Masks made Czech Republic the envy of Europe. Now they’ve blown it.” Except, they never worked; it’s just that it wasn’t their turn for the spread until the fall. Czech Prime Minister Andrej Babis boasted that his country was among the “best in Covid,” in part because of masks. In July, USA Today wrote that the Czechs taught us a “lifesaving lesson” about mask-wearing. But then in October, they experienced one of the sharpest inclines in all of Europe. They experienced two more waves thereafter, with at least the same degree of mask compliance, and now have the fourth-highest death rate in the world.

As we know, mask compliance is the key to controlling COVID cases, so I guess everybody in the Czech Republic start… https://t.co/8Tz38zdaWJ

The highest death rate in the world, of course, is Peru, with one of the longest and strictest lockdowns and earliest mask mandates.

Peru had one of the world’s longest lockdowns, with early mask mandates & permission slips required to leave home.… https://t.co/LCbU9kL822

No country has taught the world more about mask-wearing than Japan, and no country now faces the shame and embarrassment of its failures. It’s sure great we chose Japan as the host of this year’s Olympics, so we don’t have to worry about COVID because of their mask-wearing. After all, more than a year ago, Forbes reported, in an
article titled, “The Japanese perfect the mask,” that Japan’s “high rate of mask-wearing,” reported at 96%, was “responsible for preventing the spread of COVID.” Well, the Japanese are now on their third large wave, which spread so much that all spectators were barred from the Olympics. For the first time ever, athletes are playing in front of empty stadiums because masks worked so well until they didn’t.

Japan’s seeing another sizable and rapidly growing increase despite their 98% compliance and “culture” of mask wear… https://t.co/ZwN1w3ayKQ

It should by noted that, like most Asian countries, Japan’s death rate will likely remain low. But it’s clear that this has a lot more to do with the health of its population and possible inherent partial immunity, and not masks, because the virus is spreading uninhibited.

Historically, Israel has done things smartly, so everyone credited the Israelis’ disciplined mask-wearing with their mild waves for the first few months of the pandemic. In fact, despite having a mild wave in the early summer and a substantial wave in the fall of 2020
after the masks and strict enforcement thereof were in place, the WSJ cited “experts” on November 1, basically saying that lockdowns didn’t work but the masks did. “Infections are dropping sharply despite less stringent rules and more defiance of them, likely because of more widespread use of masks,” wrote the Journal. Well, after “working” for a few weeks (after “not having worked” in the prior waves), they went back to not working, as Israel experienced its worst wave yet in December and January. Eventually, cases ground to a halt, as they did in most places after the winter spread, and Israel finally relaxed the mandate. Another wave came back, and the country reinstated the mask mandate on June 24. Yet despite the mandate and one of the highest vaccination rates, cases have increased tenfold since June 24 and are higher than they were at this time last year with zero vaccination.

It’s absolutely hilarious that Israel is reinstating a mask mandate given that the initial one already completely f… https://t.co/qoNZtuUtEb

California at large, and San Francisco in particular, did everything “right” and did so from early March 2020. Last August,
CNBC hailed San Fran as being “better off than most U.S. cities,” in part because of its culture of masks. Dr. Bob Wachter, chairman of the department of medicine at UC San Francisco, was quoted as crediting the “social pressure” in the city. “In San Francisco, if you go to a gathering with one person having a mask off, it’s likely that person would be looked at funny and their friends might even say something,” he said.

While they did finally relinquish the mandate about a month ago, the city still has a much greater residual culture of mask-wearing than almost anywhere in the country. Yet despite being above the 35th parallel, San Franciscans are experiencing their sharpest increase ever, whereas most of those experiencing increases now are in the South, as we witnessed last year. Moreover, like most places with a strong culture of masking, they have a strong culture of vaccination, with
85% of seniors fully vaccinated and 77% of those over 12.

A
USA Today fact-check cited a CDC report crediting masks for the rapid decline in cases in Jena, Germany. “And in the German city of Jena, first in the country to implement public mask wearing last April, masks led to a 75% decrease in new COVID-19 cases in little under three weeks, one December study found,” wrote the fact-checker on March 12, 2021, in claiming it’s “false” to assert that the CDC’s evidence found a “negligible” effect of masking. What is shocking about the timing of this “fact-check” is that the checker had the luxury of experiencing an entire year of the curve and could easily have seen that after cases went down, they went up over the winter by nearly 1,000% in the state of Thuringia (of which Jena is the largest city) after the mask mandate was in place so early! Yet they can publish information that was disproven by reality. 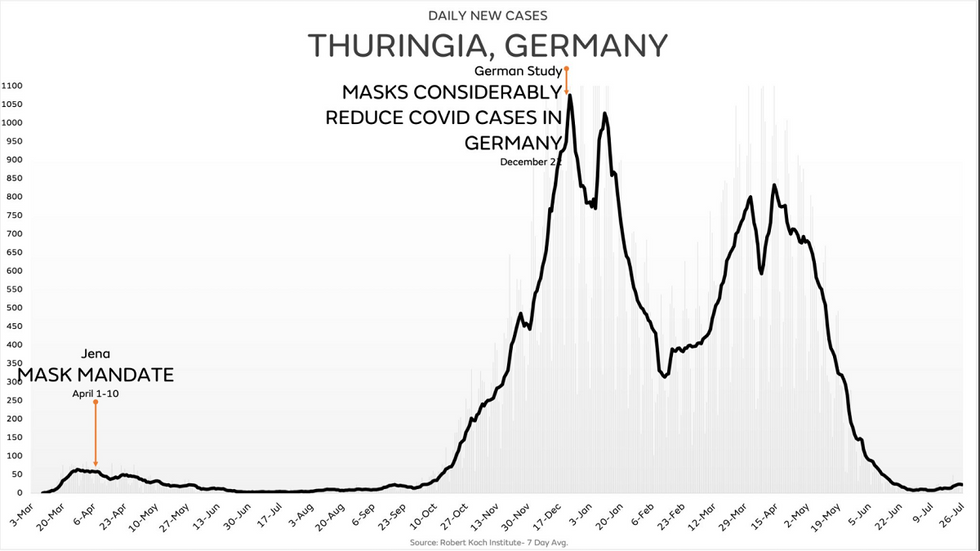 In general, Germany is quite instructive, because Bavaria and Berlin are one of the only known places to mandate the use of N95 masks, yet they failed to stop the subsequent wave.

Back at the end of March, Berlin mandated N95 masks be worn, joining Bavaria with the strictest mask mandate in Ger… https://t.co/y19cUh2gvG

There are many more examples, but we need not belabor the point that after 17 months, it is impossible for any rational person to think masks factor in at all in changing the spread of a virus.

Some have suggested that America has become a less religious country in recent years. What the past year has demonstrated is that a great many have unwavering faith in religion, just not the one that serves the God our founders did.

Horowitz: Governors and legislatures must declare war on the CDC

Horowitz: Facebook’s ‘independent’ fact checker on vaccines is funded by … you guessed it