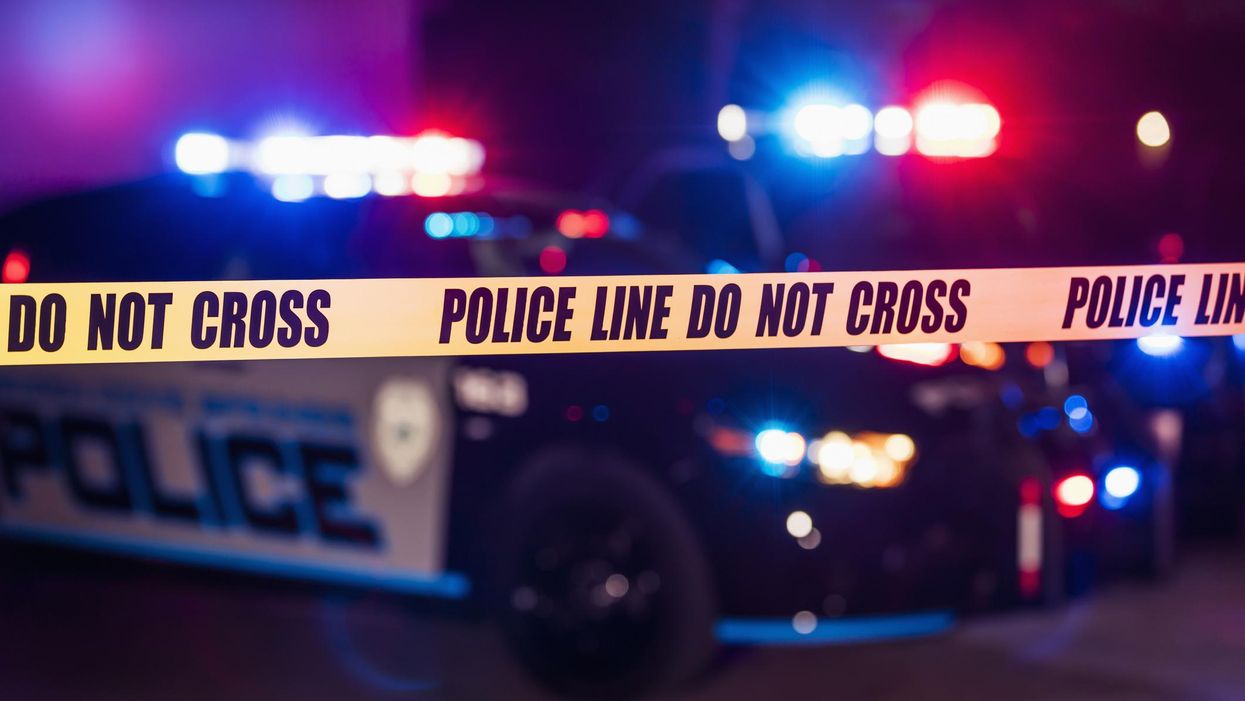 Sadly, there is nothing new about the story of Darion Lafayette. A young black suspect with a long rap sheet who kills a cop with a gun he was able to purchase despite Illinois’ tough gun control measures — that is essentially the story of every major city. What is new, however, is that after the other cop in this deadly altercation was forced to kill Lafayette, the local media initially treated Lafayette as a martyr, despite the fact that the officer was justified by a mile. Thus, we have now reached a point in society when a black criminal can kill a cop and it’s the fault of everyone (and the gun) except the criminal. Last Friday, WCIA-TV, the CBS affiliate in Champaign, Illinois, aired a segment on Darion Lafayette, a deceased cop-killer, literally depicting him as an angel. 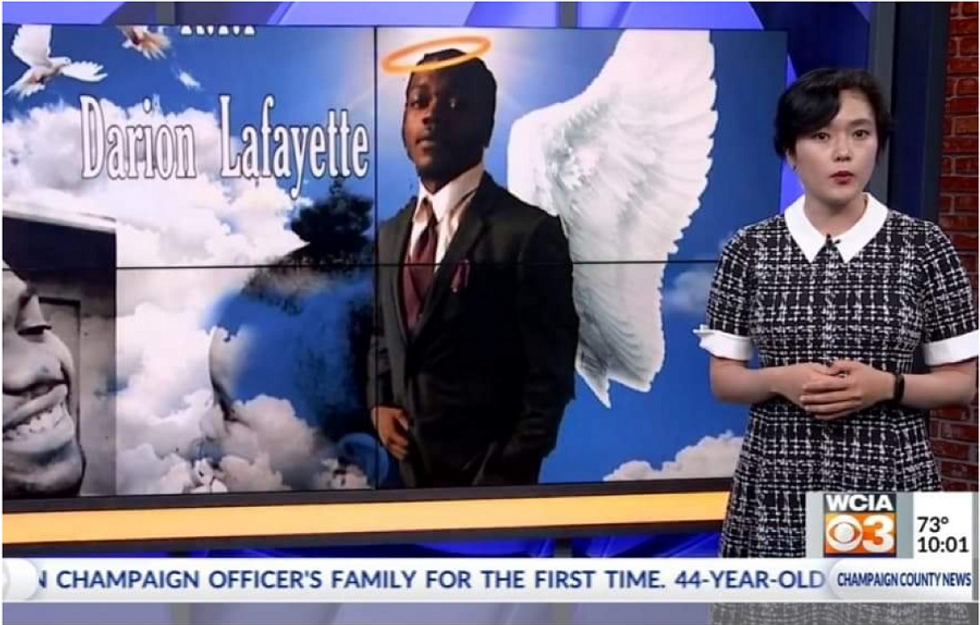 The segment began with an interview of a family member declaring, “He’s the most compassionate person who you will ever meet in your life, if you ever knew him.” Jessica Kunz, who anchored that broadcast, followed up, “And now they’re mourning him after he died in an exchange of gunfire with Champaign police.”

Back when America’s media was sane, someone watching this segment would have thought that police somehow accidentally shot this innocent bystander in the middle of a shootout. The reality is quite different. Officer Chris Oberheim and his partner, Officer Jeffrey Creel, were responding to a domestic disturbance call at an apartment complex in the early hours of May 19 when Lafayette allegedly charged at Creel from his car. Neither officer even drew his weapon as Lafayette engaged in a physical struggle with Creel. During the struggle, Lafayette fired a 9mm Glock, striking Oberheim three times, including one time fatally in the head. Creel was also shot three times but managed to take cover behind his car.

Only at that point, according to a preliminary investigation by state’s attorney Julia Rietz, did Creel use his uninjured arm to fire four shots at the suspect. Lafayette later died of his wounds.

Officer Creel is a surviving hero, and Officer Oberheim is a hero who sadly leaves behind a grieving wife and four daughters. Based on the details of the investigation, one has to wonder whether they hesitated in drawing their weapons quickly enough and whether that led to Oberheim’s death. Yet, despite these details being abundantly clear from day one, WCIA still ran the segment essentially mourning the life of Lafayette more than a week later. It is this irresponsible treatment of every cop shooting as unjustified and every black criminal as a hero that is needlessly stoking racial tensions and animus against cops, while emboldening the worst street criminals.

Officer Oberheim’s sister told Breitbart News that when she called the station to complain, the reporter initially blew her off. Later on, WCIA did issue an apology. However, what this story demonstrates is that there is an entire segment of society that now believes police must die at the hands of the increasing number of violent criminals on the streets, and if the suspect is black, the suspect is always celebrated, while the cop is vilified.

After the report aired, dozens of local businesses showed support for the slain officer’s family by canceling their advertisements on WCIA, and instead, donated to the family’s GoFundMe page.

Here is a list of businesses that pulled their advertising from WCIA, per one local activist on Facebook.

Perhaps this successful boycott might provide patriots with a blueprint for using the cancel culture against the cancelers.

The twisted irony is that, among the celebrated, sainted, and martyred criminals shot by police in recent months, not a single one of them was someone who should be admired. As reported by Breitbart News, “According to Champaign county court records, Lafayette has been charged with aggravated domestic violence with three different women as well as possession of drugs, including methamphetamine.”

As I’ve reported before, the reason why seemingly innocuous police encounters are increasingly turning deadly is because, thanks to “criminal justice reform,” so many violent criminals who were previously in jail are now out on the streets. It’s not surprising that these same individuals will needlessly resist arrest or even attack the police during what should be a routine encounter.

Just last week, local media in Minneapolis reported that Daunte Wright, the latest sainted figure of BLM and the cultural elite, is being accused posthumously in a civil lawsuit of nearly killing a 16-year-old boy in May 2019. Jennifer LeMay, the mother of Caleb Livingston, filed suit against Wright’s estate alleging that Wright shot her son in the head two years ago, leaving him “alive but without function.”

Obviously, the female officer who shot Wright during the traffic stop made a mistake drawing her gun instead of the taser, but the reason that encounter ultimately turned deadly is because he resisted arrest and started fighting with police. The reason he was fighting with them is because he was a high-level, violent criminal, not a saint. While we can always find an incident when the police make a mistake, the fundamental problem here is that we have a plethora of violent criminals not locked up anyway.

When the leftists can’t pin the blame on police, they seek to blame our gun laws, as one Illinois state legislator did in the Lafayette case. But the reality is that under Illinois law, Lafayette could not legally possess a firearm under any circumstance, yet managed to obtain one anyway. As I reported last week, Chicago in particular, which has the toughest gun laws, has released hundreds of violent gun felons, including convicted murderers, on supervised parole with too few cops to properly monitor them.

Everyone in the country will remember Officer Derek Chauvin in the Floyd case until the end of times, but almost nobody will ever know about people like Officer Oberheim and Officer Heacook, two policemen who were recently murdered by repeat violent offenders without even drawing their service weapons. The latter cases, when police use underwhelming force to their own detriment, are so much more common than the Floyd case, yet there is no effort to create a “BLM-style” revolution for strengthening the hand of cops, locking up gun felons, and celebrating the heroes who give their lives to protect the people.

This disconnect boils down to the most basic recognition of good and evil. The cultural elites have brainwashed a segment of the population into believing that so long as the color of a criminal’s skin is dark, white cops and civilians who are forced into a violent confrontation with them forfeit their right to live and even their right to be honored after their sacrifice.

The results are devastating. With the cops on the ropes, there are now endless shootings in Minneapolis where stray bullets are now killing numerous innocent citizens. The latest is the death of 9-year-old Trinity Ottonson-Smith, who was killed by a stray bullet while playing on a trampoline. Yet the country will never know her name or the names of thousands of child victims of “police reform,” even though these victims are a lot more innocent than Daunte Wright and George Floyd.

KG Wilson, whose 6-year-old granddaughter, Aniya Allen, was murdered by a stray bullet while eating McDonald’s in her car in Minneapolis, aptly observed that “everybody’s afraid to speak the truth” about what’s happening in Minneapolis. “A black person who was killed by a white officer … that’s something different. I personally don’t think it was purposely done, but it was done and somebody needs to pay. But we need a movement right here for what’s going on here; black people hurting, shooting and killing black people. People are afraid to tell the truth,” he said.