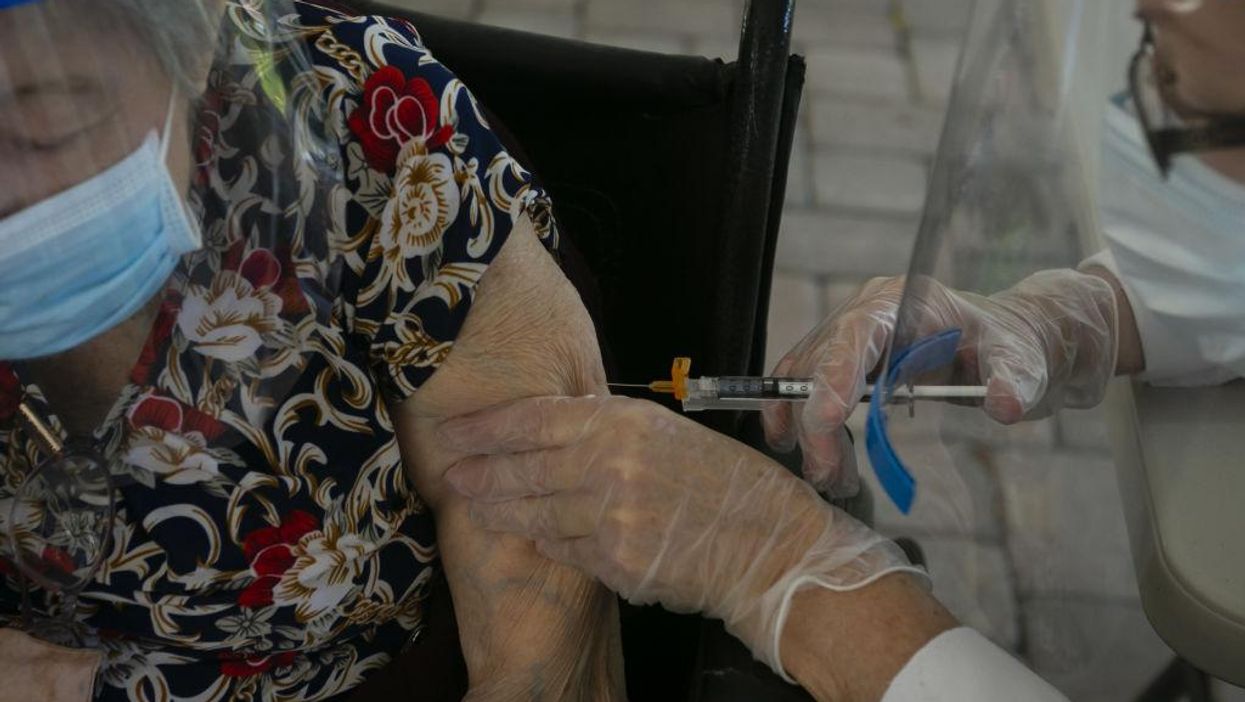 The government plans to double down on risking the lives of seniors in nursing homes — exposing them to the risk of endless experimental booster shots without any benefit. By pushing booster shots, they are now admitting that the shots have failed, at least in the long term. Thus, why are we not further studying the side effects of these shots, and instead risking more injections that they are admitting might only last for a few months with an ever-mutating virus? Moreover, why are we not working on boosting the immune system of senior care residents and having effective early treatments in place?

NBC News reported last week that West Virginia health officials plan to conduct antibody tests of their nursing home patients to determine whether their levels have waned and whether they need yet another shot.

“In West Virginia, we were very aggressive in vaccinating our long-term care population, but we now worry and are paying more attention about whether we have sufficient immunity in those fully vaccinated,” said Dr. Clay Marsh, the state’s ad hoc coronavirus czar.

They will also allow anyone over 60 to access these antibody tests if they had the shot more than six months ago. The program is being dubbed, “Booster Battlefield Assessment.”

This is a stunning admission that is appalling and self-contradictory at the same time. They claim this process is voluntary and that the data will be shared with the federal government to determine the need for a third shot. Presumably, if they discover waning antibodies, the third dose will become the new standard across all nursing homes, and likely in the general population thereafter.

However, if the vaccine works so much, and is practically forced upon senior care residents, then why would they need a third shot? And if they need a third shot, isn’t that a recognition that the first ones didn’t work and weren’t worth the risk of side effects? Remember, this is not a new shot that has been perfected over the original ones, it’s merely another dose of the original shot. With an ever-mutating virus, it’s akin to giving another booster of the flu shot from the previous season against the new season’s strain.

Even if one is strongly in support of the vaccine in general, the facts on the ground should dictate a complete course correction in strategy with nursing home patients for a variety of reasons:

While we all agree that nursing home patients are very vulnerable to the virus, and that the experimental shots would be warranted for them, that was all predicated on the shots actually working. But if they will continuously need boosters every few months, are the risks really worth it?

Remember, seniors, especially at the end of their lives, are likely very vulnerable to side effects from the shots. However, because of their health status, vaccine-related deaths and severe injury are likely underreported relative to the healthy population in which sudden death and illness are hard to overlook. Given our society’s lack of regard for nursing home patients in general, and lack of oversight of the vaccine safety in particular, very few scientists have even studied the effect of the vaccines in the frail population.

However, one study conducted by the Norwegian Medicines Agency, which examined the first 100 nursing home patients to subsequently die after having gotten the Pfizer shots, gives us some reason for concern. They found a causal link between the Pfizer-BioNTech vaccine and death to be “likely” in 10 of the 100 cases, “possible” in 26 cases, and “unlikely” in 59 cases. The remaining five were deemed “unclassifiable.” That’s 10% of the first 100 presumed natural deaths in nursing homes likely due to the vaccine.

“Frail patients can benefit from vaccination because they are at great risk of serious illness and even death if they become infected with the COVID-19 virus,” said Sigurd Hortemo, senior medical consultant at the Norwegian Medicines Agency. “Nevertheless, the expert group believes that, for some of these frail patients, common adverse reactions may have contributed to a more serious course of their disease.”

Now, several months later, consider the fact that this antibody test they are conducting in West Virginia demonstrate the shots might not even work beyond a few months. We are still figuring out whether the shots wane with time or whether they are much less effective against new variants (or both).

But if one of those two problems are proven, it will mean that seniors must either get shots every six months or perhaps they are no longer effective at all even in the short term with new mutations. To simply vaccinate senior care residents without any evidence just because they are very vulnerable to the virus is indefensible.

What about prior infection?

One of the most egregious aspects of the push for mass vaccination without any degree of nuance or circumspection is that they are ignoring the fact that half the population already had the infection, and therefore have much more robust immunity than the vaccine can convey without taking on the risk of side effects. This is doubly true with the nursing home population, which likely has a massive degree of herd immunity.

As painful as the cost was, most senior care facilities residents already got the virus. It is simply unacceptable to shove a vaccine on people who already have greater immunity. And if for some reason they feel that the very frail will not be protected by natural infection, they most certainly won’t be protected by a vaccine which has proven to be less effective than natural immunity for the general population.

As such, if they are going to embark on a third dose strategy, they should at least test people with a T-detect test, which can identify whether the patient has broad T-cell immunity, likely from natural infection. Anyone who has T-cell immunity should not be given any more shots.

What about vitamin D and other ways to boost the immune system?

If we are going through the pain to test the blood levels of nursing home patients, why not at least test their vitamin D and zinc levels. To begin with, seniors are almost always deficient, especially a population of people who were locked indoors for months. Rather than risking another experimental shot that, by their own admission, might not work, why not boost their immune system with high doses of vitamin D and other natural supplements.

As a recent analysis of 13 vitamin D studies concluded, “Low serum vitamin D levels are statistically significantly associated with the risk of COVID-19 infection” and “supplementation of vitamin D especially in the deficiency risk groups is indicated.” Seventeen months into this virus, it’s unconscionable that this hasn’t been suggested for nursing home patients, especially if we are willing to give them endless experimental shots.

The risk of spiking infections and vulnerability

Even for people without immunity from natural infection, there is a real concern about vaccinating them in large numbers while a wave of the virus is percolating. A very large Swedish observational study found that those within 14 days of receiving the first shot were actually more vulnerable to infection than even those completely unvaccinated. It also found that natural infection worked better than even both doses of the shot before it wears off! Another study from the Department of Infectious Disease Epidemiology and Prevention, Statens Serum Institut, in Copenhagen, Denmark, found that health care workers within seven days of the first shot were more than twice as likely to get infected than those unvaccinated.

Thus, vaccinating more people during a wave is completely counterproductive. Testing people for vaccine antibodies without testing for prior infection makes no sense. Why wouldn’t our government instead give everyone a free T-cell test to ensure they don’t already have prior infection, before injecting them with yet another shot? Why won’t they offer free blood panels to test vitamin D and zinc levels and offer free supplements, at a fraction of the cost of what they are spending on failed policies?

Well, it’s not their money, so they don’t care, so long as Big Pharma gets its slice of the pie. That’s the only science that matters.