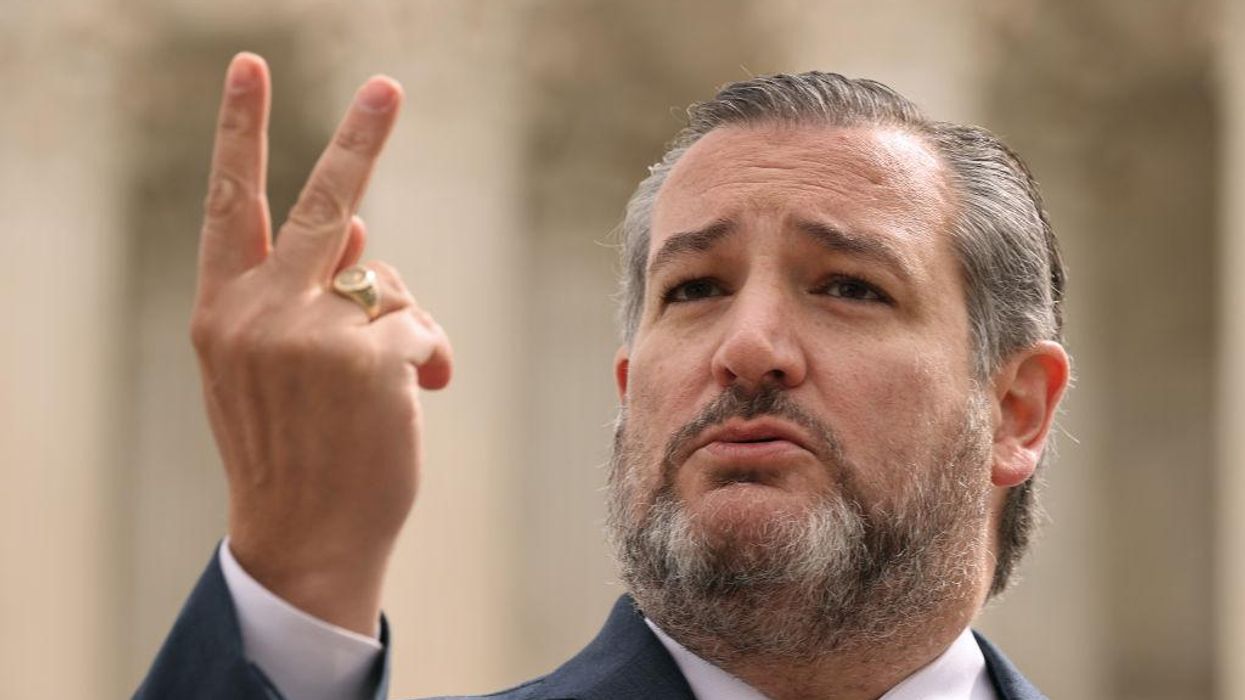 A Georgetown law student confronted Sen. Ted Cruz (R-Texas) on Thursday about “court packing,” redefining the term to demand why Cruz was opposed to efforts by Democrats to expand the number of justices on the Supreme Court by four.

Cruz was speaking at a news conference with Sens. Lindsey Graham (R-S.C.) and Marsha Blackburn (R-Tenn.) in front of the Supreme Court about a Democratic bill to expand the number of justices on the Supreme Court from nine to 13. The senator from Texas accused Democrats of making a “power grab.”

“You didn’t see Republicans, when we had control of the Senate, try to rig the game. You didn’t see us try to pack the court,” he said.

After his remarks, a self-identified “law student” approached the senators and demanded to know what the difference was between “packing the courts” and the Republican Senate majority’s actions in 2016 to prevent a Democratic president from filling vacancies on the court and in 2020 to install a Republican-nominated justice.

“Senators, how is court packing any different than what the Republicans did in 2016 and 2020?” the law student asked.

“We filled vacancies, that’s not packing the court,” Cruz responded.

“They’re doing something that’s allowed under the Constitution,” the student pressed. “It’s not an obstruction to the rule of law if it’s in the law.”

“Sure it is,” Cruz replied. “It’s politicizing the court.”

“You politicized the court in 2016!” the student charged, echoing talking points from Democrats who were outraged by the GOP’s actions after the deaths of Justices Antonin Scalia and Ruth Bader Ginsburg.

In 2016, when Scalia died, the Republican-controlled Senate refused to hold a hearing to consider President Barack Obama’s nominee to fill the Court vacancy, Merrick Garland. The vacancy was not filled until several months later, after President Donald Trump was sworn into office. After Ginsburg’s death in 2020, Trump nominated Amy Coney Barrett to fill that vacancy and Republicans swiftly acted to confirm her to the Court before the presidential election, leading to Democratic accusations of hypocrisy.

The law student insisted there is no difference between what Republicans did and what Democrats are now trying to do by expanding the court.

“We didn’t pack the court, we didn’t add a single justice,” Cruz shot back. “We could’ve done this same garbage, but we didn’t because it would’ve been wrong.”

Traditionally, “packing the court” has been understood to refer to efforts by a political party to expand the number of seats on the Supreme Court in order to achieve more favorable rulings. Democratic President Franklin D. Roosevelt infamously threatened to add up to six justices to the Supreme Court in 1937 after the Court had struck down several of his New Deal programs.

But last October, after facing repeated questions on whether he would support an effort to pack the courts as president, then-candidate Biden said, “the fact is that the only packing going on is this court is being packed now by the Republicans after the vote is already begun.” Overnight the Democratic Party, the media, and liberal legal scholars redefined the term “court packing” to include any perceived effort to manipulate the Supreme Court’s membership for partisan ends.

Cruz contested this new definition, insisting that a threat to expand the number of justices on the court to achieve partisan-favored rulings is fundamentally different from filling a vacancy.

“Look,” he said. “If there’s a judicial vacancy Joe Biden and the Democrats in the Senate are entitled to act to try to fill it and if they nominate someone bad, we’ll oppose that justice. That’s the political process, that’s how it operates.”

The law student then tried to argue “packing the court” is also part of the normal political process because it’s a power Congress has in the Constitution. But Cruz wasn’t having it.

When the law student said he was sure Ginsburg or Breyer wouldn’t approve of the Republicans filling court vacancies in 2016 and 2020, Cruz tried to explain the difference one more time, as if speaking to an idiot.

“Filling a vacancy is fundamentally different from packing the court and tearing it down — and listen, if the Democrats add four new justices it also starts a ridiculous escalation. What does that mean? It means the next time Republicans take over, we add four new justices. That is a terrible thing. We don’t need a Supreme Court with 35 judges on it. We’ve had nine for 150 years and we need to respect the rule of law.”

After the student posted the exchange on social media, his professor Josh Chafetz shared the video, praising his student.

“One of my students came across Ted Cruz’s anti-Court-packing press conference and naturally gave him hell,” Chafetz wrote.

Whole lotta folks suggesting that my student “can’t tell the difference” between adding judges and other ways of af… https://t.co/7AeCWs7G4e

But Cruz responded, calling the episode “embarrassing” for both the student and the professor.

“I assumed he was a Dem tracker reciting talking points,” Cruz tweeted. “Not sure what’s more embarrassing: that he’s an actual law student who doesn’t know the difference [between] filling vacancies & packing the Court. Or that his law prof is proud of his ignorance & thinks it’s ‘giving me hell.'”

I assumed he was a Dem tracker reciting talking points.

Not sure what’s more embarrassing: that he’s an actual law… https://t.co/Bs6R0sTese