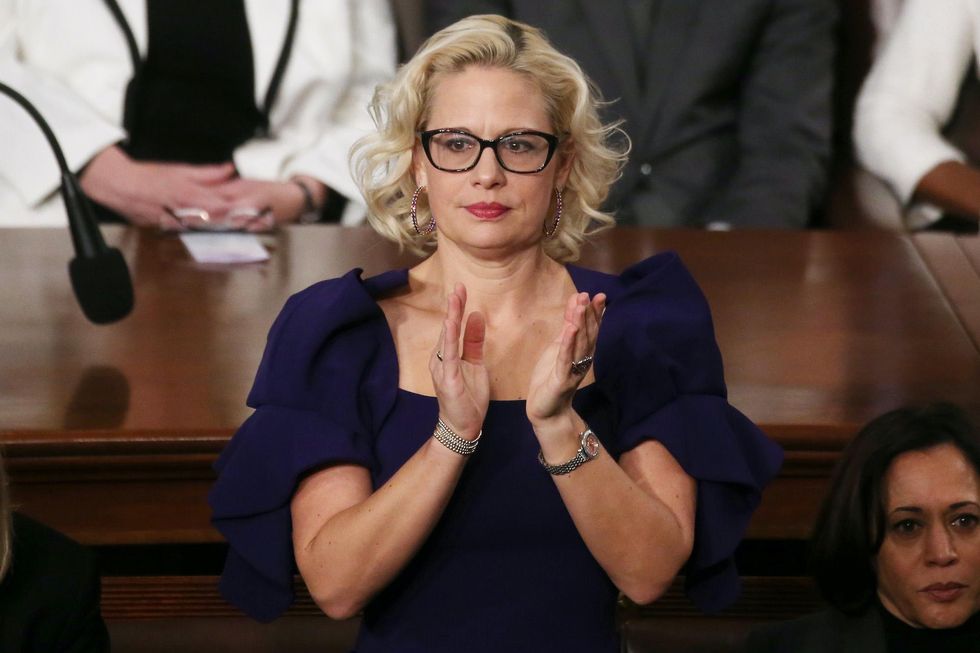 Liberals who were hoping that Democrat Sen. Kyrsten Sinema of Arizona might vote in support of a minimum wage hike were disappointed and many angrily turned to social media to register their outrage.

The openly bisexual senator is also a moderate Democrat on many issues owing to the demographics of the state she represents. On Friday she voted alongside 7 other Democrats to kill the proposal from Sen. Bernie Sanders (I-VT) to include the wage hike in the latest coronavirus relief package.

Sinema’s critics were especially outraged because of the way she entered her vote.

Did Sinema really have vote against a $15 minimum wage for 24 million people like this? https://t.co/Jv0UXLKLHI

“Kyrsten Sinema is the most vapid Democratic politician to come along in quite a while. Her shtick of funky hair and bright clothing as a mask for her apparent sociopathy is downright horrifying,” tweeted Emma Vigeland, a progressive commentator.

“Kyrsten Sinema giving the $15 minimum wage a ‘Gladiator’ style thumbs down would’ve been a left twitter joke a week ago,” tweeted Ken Klippenstein, a reporter at The Intercept.

“No matter what you think of @kyrstensinema’s vote, these optics are horrible,” tweeted journalist Yashar Ali. “You may think people don’t deserve to be paid more, but you don’t need to make a show of it.”

Others were incensed that Sinema had brought a large chocolate cake into the Senate and compared her to Marie Antoinette, the historical figure known for a similar act.

“Incredible. On the day that she votes to block a raise in the minimum wage for 32 million working class Americans, @kyrstensinema not only walks into the Senate with a big chocolate cake but posts on FB about a future getaway to Bora Bora. ‘Let them eat cake,’ indeed,” tweeted progressive activist Kai Newkirk.

“Kyrsten Sinema is an out-bi Senator but a closeted Conservative and wannabe Marie Antoinette,” tweeted another critic.

“She’s decided she’s going to be a media darling as Marie Antoinette of the establishment. Dress in a super fun way, do performatively hip thumbs downs as she votes to kill higher wages & now rub it in with symbolic cake we can all eat instead of higher salaries,” tweeted failed congressional candidate Cenk Uygur.

It turned out that Sinema had brought the cake for Senate staff who had to work through the night over a request by a Republican senator.

Sinema explained in a statement after the vote that she would support a raise in the minimum wage but not the inclusion of it in the coronavirus relief bill.