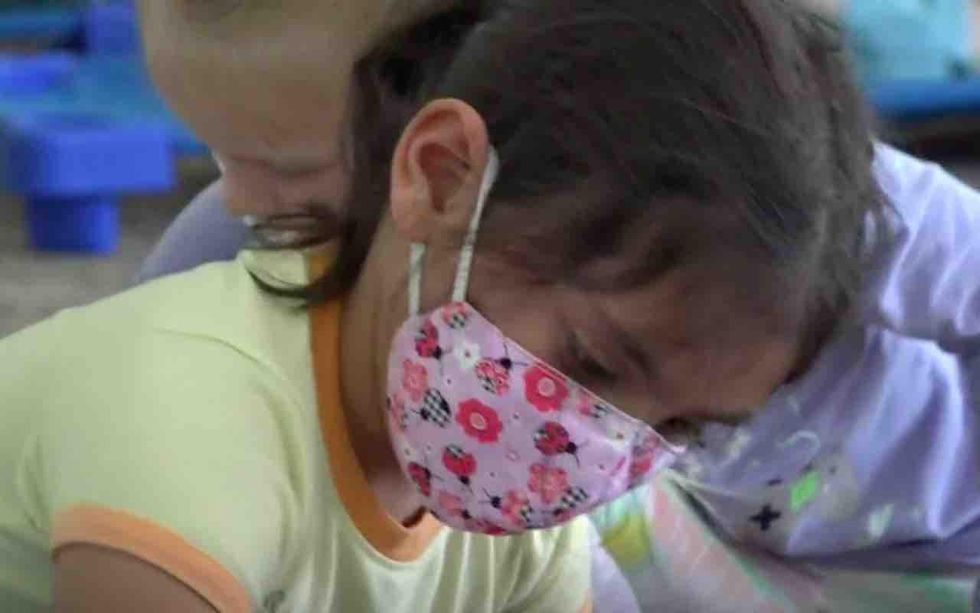 A new Michigan mask mandate applying to children ages 2 through 4 went into effect Monday, requiring them to wear masks in all public places, including schools, child care centers, and camps.

WZZM-TV noted that in April, the state has tallied a spike in COVID-19 cases among children, and last week some hospital leaders said they are treating more children for the virus than ever before — even ones with no underlying conditions.

But the new mask mandate has created new problems for those charged with enforcing it — and the station profiled a day care center that is experiencing difficulties.

“It’s impossible. She’s not even teaching anymore,” Erin Farias, owner of Little Smiles Daycare and Christian Learning Center in Kentwood, told the station regarding her toddler teacher. “She’s not getting any of the curriculum, any of the crafts. It’s just, ‘Wear your mask, pull your mask up.’ That’s what their day is.”

Farias told WZZM she understands the mask mandate for 2- to-4-year-olds, particularly because at the Little Smiles centers they’ve seen an increase in the virus’ spread: Last year, they had to close only two rooms all year to quarantine — but in the last two weeks they’ve had to do it twice.

“We’re struggling, this isn’t a school right now,” she added to the station. “This is a ‘let’s follow this rule all day long.’ It’s hard.”

The latest mandate is in effect until May 24, WZZM reported.

Doctor is all for toddlers wearing masks

“Even from the fall, the Centers for Disease Control and Prevention has said kids two and older should be wearing masks, to begin with,” Dr. Matthew Hornik of the Pediatric Care Corner in West Bloomfield Township told the station in a separate story. “So, you know, this isn’t an out of the blue, left-field kind of a thing that’s being done now.”

Hornik added to WZZM that “the data recently has shown an increase in children. As more adults are getting vaccinated, and as this UK variant is spreading in the state, it’s a lot more contagious. So, yes, there still is a small amount of spread in schools and daycares. But anything we can do to help kind of mitigate that spread even further is going to help.”

Hornik also is president of the Michigan Chapter of the American Academy of Pediatrics, the station said, adding the he said there’s no danger in toddlers wearing masks as long as they’re changed out and the correct size.

“I’ve seen a huge increase in comfortability, even in my own office, with kids who at the beginning of this whole thing were having to wear masks in the office,” he added to WZZM. “You know, now I see them and it’s like nothing is even happening. They’re just totally comfortable with it.”

Hornik also told the station that if adults are “modeling good behavior and talking to [kids] about it, and taking away that kind of stigma of it being bad, then they’re more likely to wear it. So, put it on their stuffed animals. Show pictures of other kids wearing it. And, as they get older they’re obviously going to ask more questions and you can be able to explain, ‘you know you’re wearing this to help protect yourself and to help protect others and doing your part to get through this pandemic.'”

Pastors and ministers speak out against pro-life ‘heartbeat’ bill: ‘We will never give up … our God-given right to choose’

Father used 3-month-old son as human shield during shootout with police, source says. Now the boy and his father are dead.

Now over half of nearly 100 cases against federally charged Portland rioters are being dismissed — and only one perp is heading to prison...