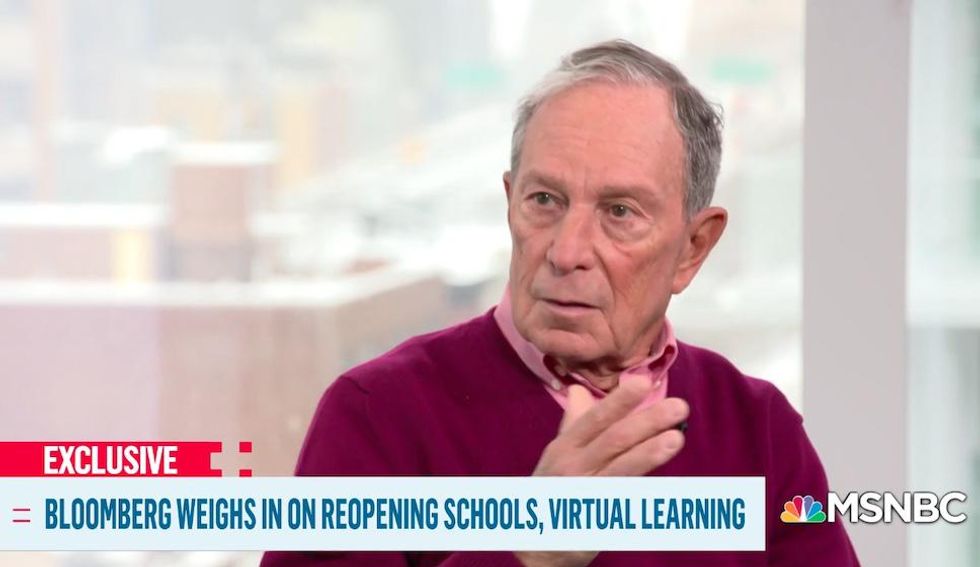 Former New York City Mayor Michael Bloomberg said this week that it’s time for President Joe Biden to get serious when it comes to reopening schools.

In a wide-ranging interview Wednesday with MSBNC on how the nation can recover from the COVID-19 pandemic, Bloomberg pulled no punches when it came to getting schools reopened across the country and offered some free advice to the president: It’s time to stand up to the teachers unions and tell educators “suck it up” and get back to work.

Americans have witnessed an ongoing debate at city, state, and federal levels about the need to reopen schools. For example:

Bloomberg, who has been advocating for reopening schools for some time, wasn’t standing for it and called the current situation a “disgrace.”

“I think that what we’re doing to poor kids is a disgrace,” the former mayor said. “These poor kids are not in school. They will never recover from this — and they had a bad education experience anyways. We have not had good schools for poor kids. And this, now, is just so much worse.”

Biden “has to stand up to the unions,” Bloomberg said.

What about the teachers’ concerns about safety during the pandemic?

Bloomberg had a message for them, too: Hey, get back to work, risks are “part of the job.”

“Teachers say, ‘Well, I don’t want to go back because it’s dangerous,'” he began. “We have a lot of city and state and federal employees who run risks — that’s part of the job. You run risks to help America, to help your state, to help your city, to help your family, and there’s just no reason not to have the schools open.”

But, but, but what about distance learning? Isn’t that working?

“Virtual classes are a joke — worse than a joke,” he continued. “Poor people don’t have iPads. They don’t have WiFi. They don’t have somebody at home to sit during the day and force the child to pay attention, and without that, the virtual learning just does not exist.”

Biden needs to push unions to the side

In order to counteract the “disaster” that school kids are facing, he said, Biden needs to push unions to the side and focus on the kids. And teachers, for their part, just need to “suck it up.”

Noting the problems Chicago and New York City have had with the teachers unions, Bloomberg said, “It’s time for Joe Biden to stand up and say the kids are the most important things, important players here, and the teachers just are going to have to suck it up and stand up and provide an education. Otherwise, these kids have no chance, whatsoever.”

Relevant portion begins at the 7:14 mark:

House Democrat blames maskless Republicans after contracting COVID-19: ‘They endanger everyone around them’