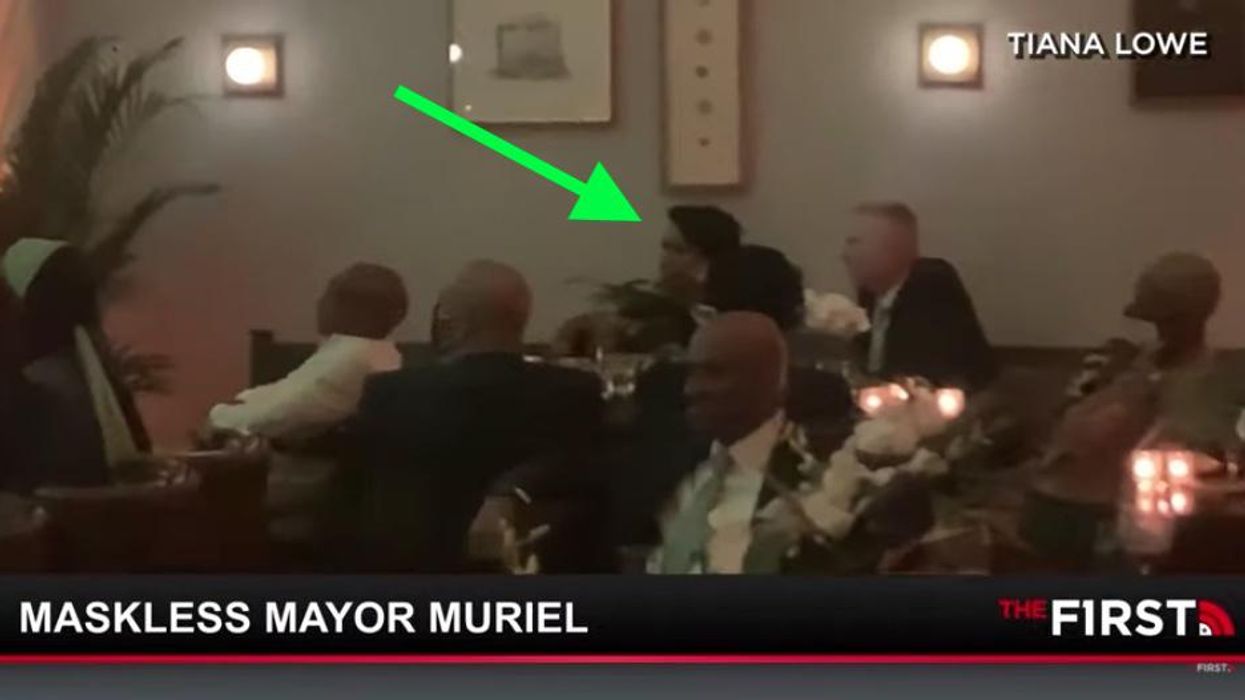 Muriel Bowser, the mayor of Washington, D.C., was caught maskless at an indoor wedding reception Saturday night — a clear violation of her newly imposed mandate requiring all vaccinated people in the district to wear masks indoors.

In response, the mayor’s office claimed they mayor was actually in full compliance with the mandate. In order to cover for Bowser, two CNN hosts even came up with excuses that the mayor’s office did not offer, including that the photo must have been taken when she was either eating or drinking.

However, video footage from the reception clearly shows the mayor was not eating or drinking when she was maskless but was, instead, enjoying the revelry that had been denied to so many Americans over the last 18 months.

Bowser officiated an outdoor wedding Saturday in the Adams Morgan area of D.C., which was followed by an indoor reception.

Washington Examiner reporter Tiana Lowe first reported the mayor’s mask violation over the weekend when she posted a photo of a maskless Bowser from the indoor event — which also featured hundreds of unmasked guests.

When encountered by the Washington Examiner, Mayor Bowser confirmed that she officiated the maskless, indoor weddin… https://t.co/w4LFXrbAew

When Lowe attempted to ask Bowser why she was maskless, security reportedly prevented her from approaching the mayor.

In response to Lowe’s reporting, the mayor’s office issued a statement claiming that Bowser actually did wear a mask indoors and was in full “compliance with the mandate.”

But Lowe recorded video of the mayor violating the mandate and shared it Monday in a piece titled, “DC Mayor Bowser lied and we have the video to prove it.”

In an interview with The First’s Buck Sexton, Lowe explained that Bowser was “very, very visible” and added that she was shocked that no one — including a CNN reporter who was in attendance — had already put something out on social media about the “obvious Marie Antoinette-style moment.”

According to Lowe, the mayor was “sitting there for 10 minutes that I was observing not wearing a mask.”

When Sexton asked if Bowser was lying, Lowe did not hold back.

Citing the video, the reporter said, “It’s clear that she planned to officiate this wedding and attend, and then also put in the mask mandate for Saturday morning at 5 a.m.” — meaning, Lowe pointed out, that “she knew that by Saturday evening by 9 p.m. that she was going to violate her own order.”

“Which either means she’s a moron, or she’s a liar who knows that these indoor mask mandates don’t matter,” Lowe said.

“She would not be sitting there without the mask if she thought it actually protected her from COVID,” she added.