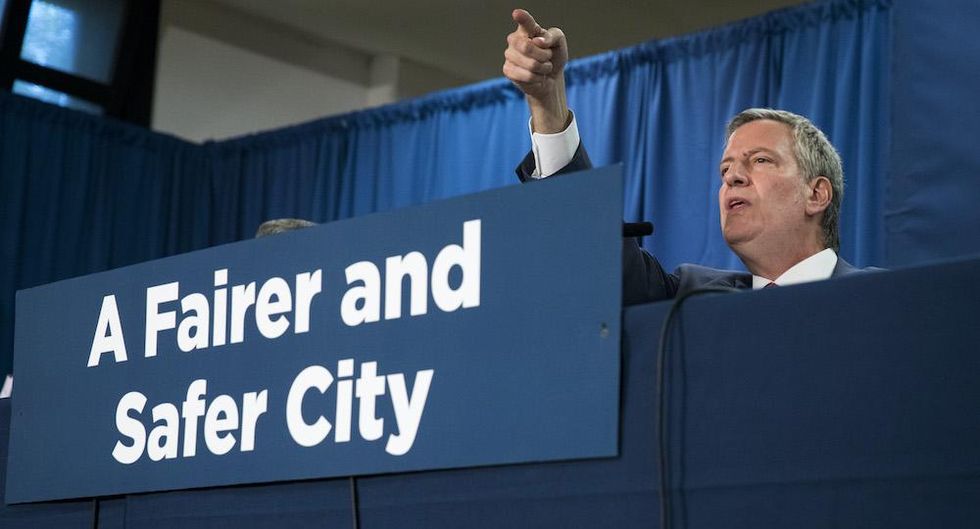 For the last year, Americans have been inundated with calls from anti-cop protesters and lawmakers to “defund the police.” Efforts to cull law enforcement resources have been met with resistance from police departments across the U.S. as well as increases in crime.

Metropolitan areas like Los Angeles, Minneapolis, and Portland have been forced not only to admit that the “defund” efforts backfired, leading to higher crime rates, but also to request funding increases for their PDs.

The Big Apple’s left-wing mayor, Democrat Bill de Blasio, has found himself in the middle of an ongoing battle between his fellow anti-cop forces and the NYPD as city budget negotiations heat up. Last year, de Blasio famously shifted $1 billion from the police’s $6 billion budget.

But the NYPD noted that Hizzoner’s priorities seem a little out of whack.

The SBA tweeted a potential slogan for de Blasio’s tourism push: “Welcome to the city of violence.”

Mayor DeBlasio has allocated 30 Million Dollars to bring tourism to NYC. Welcome to the city of violence. Shootings… https://t.co/de2ikUXUlB

According to the New York Post, data from the NYPD shows that at least 50 people were shot in nearly four dozen incidents over the week ending last Sunday, which is about a 300% surge from the 14 victims in 12 shootings at the same time last year (as the city was under COVID lockdown). But the same week back in 2019 saw nearly the same number, the Post said.

So far in 2021, 376 shootings have been reported with 416 victims, according to NYPD data cited by the Post.

The SBA’s criticism comes on the heels of a report that more than 5,300 NYPD cops left the force or retired last year amid anti-police hostility.

That’s a 75% spike over the previous year.

The trend is expected to continue in 2021. As of April 21, 831 NYPD cops had already retired or filed to leave.

Asian man, 61, slashed across face on NYC subway train. Victim was riding to first of two jobs and asked suspect to stop kicking...

Mayor de Blasio calls for higher taxes on the wealthy but refuses to reveal exactly whom he would label as ‘rich’ — and seems...

NYC Mayor de Blasio: ‘I like to say very bluntly, our mission is to redistribute wealth’