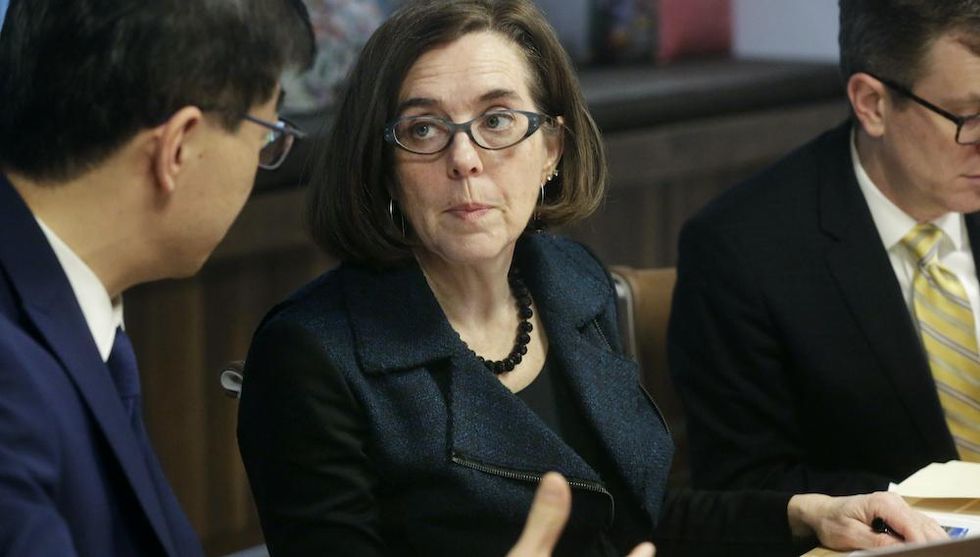 Teachers in Oregon demanded to be vaccinated before retuning to the classroom, so their governor obliged by putting them at the front of the line — even ahead of the state’s vulnerable senior population. Now, vaccinated educators, with the backing of their unions, are refusing to go back to work.

And everybody’s angry — even the editorial board of state’s giant liberal newspaper.

Recognizing the importance of schools reopening, she pushed teachers and school staff to the front of her state’s COVID-19 vaccination line — even ahead of senior Oregonians — the Willamette Week reported.

The move came because the teachers unions in the Beaver State demanded that teachers and staff be vaccinated before returning to the classroom.

On Jan. 25, teachers and school staff began receiving their shots, while Oregonians ages 80 years and older were forced to wait until Feb. 7, the Willamette Week said.

The move was a “bold” one, according to the Oregonian, considering that seniors account for more than 80% of Oregon’s COVID-related deaths.

Seniors, naturally, were upset by the decision, but Brown justified the move by focusing on the importance of reopening schools. But, as the the Oregonian noted in an editorial, “her justification for this extraordinary decision falls apart if schools across the state don’t actually reopen — a significant concern as some teachers unions question returning to in-person instruction.”

And Brown has reason to worry: The Oregon Education Association and the Portland Association of Teachers both are backing teachers who don’t want to return to the classroom, the Willamette Week reported Wednesday, as parents grow more irate and educators’ refusal to do their jobs.

Portland Association of Teachers President Elizabeth Thiel admitted to the Willamette Week that, yes, the union “did ask for teachers to be vaccinated before a return to in-person learning. Because that makes sense.”

Now, she said, because they did not ask to be put at the front of the line, teachers are in a “terrible position where we’ve been given a thing that is so needed in our community, that people are literally dying for not having access to, and then told, because we were given this, we need to go into live instruction, even though there are so many unanswered questions and concerns about whether that is going to cause an increase in community spread.”

She did not elaborate on how being moved to the front of the line somehow negated teachers’ insistence that returning to the classroom was contingent upon receiving vaccinations.

Guidance from the Oregonian

The Oregonian had some advice for their readers when it comes to their governor and her gamble on teachers: They should “expect and demand that she deliver.”

Unfortunately, Brown already appears to be disavowing responsibility for ensuring schools reopen. With educators receiving vaccines now, Oregonians should expect and demand that she deliver. A failure on Brown’s part would be an unconscionable betrayal of the hundreds of thousands of seniors who are being forced to wait in service of a greater good.

While we disagree with the decision to postpone vaccines for older Oregonians, whose vulnerability merits prioritization, the die has been cast. We also believe schools can reopen safely even without vaccines, as the Centers for Disease Control and Prevention reaffirmed last week, but recognize the political necessity of vaccinations to get schools open. […]

But Brown has taken a hands-off approach to the brewing conflicts between school districts and their teachers unions, who are balking at returning to the classroom even with vaccines.

And the paper offered this advice to Gov. Brown:

Brown can start by publicly calling on teachers unions to commit to reopening schools this year, even if that means extending the year into the summer. She can ask teachers who have no intention of returning to the classroom to delay their vaccines and free up doses for those who will. She and the Legislature should also explore what legal tools they have to require vaccinated staff to return to the classroom. And she should remind them of how many essential workers in food processing plants, grocery stores, social service organizations and more have been going to work without the benefit of a vaccine because that’s what being an essential worker means.

Unhinged leftist ‘teacher’ absolutely flips out on peaceful anti-lockdown protesters in Oregon: ‘F*** all of you!’