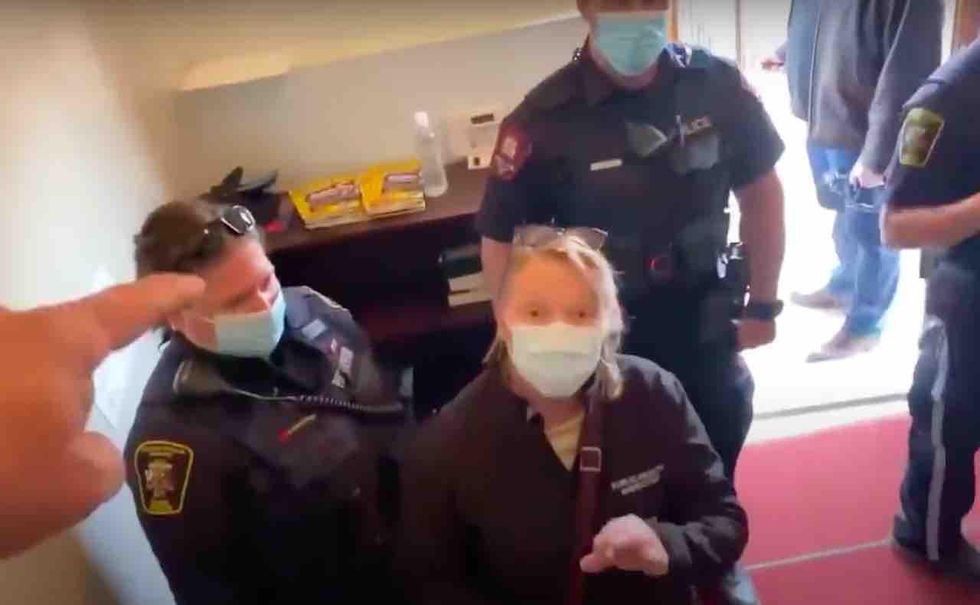 After a pastor hollered at and kicked out police from his Canadian church — a stirring few minutes captured in a viral video — Artur Pawlowski told the Daily Caller more about Saturday’s confrontation and related dealings with authorities he’s faced for more than a year.

“Nothing is holy for those people,” Pawlowski told the outlet in regard to COVID-19 enforcement officials. “They just walk in like it’s a restaurant.”

The clip, which the pastor recorded on his cellphone, shows several police officers with a public health official in the church’s lobby during a Passover service. But Pawlowski — who leads Street Church in Calgary, Alberta — was having none of it, the Daily Caller said.

“Until you get a warrant! Out!” he screamed as the team of officials slowly turned and walked down the stairs and out the door. “Immediately go out and don’t come back! I don’t want to talk to you, not one word!”

Pawlowski also hollered “out Nazi!” and “Nazis are not welcome here!”

As the officials were trudging off down a sidewalk, the pastor put the finishing touches on his impromptu sermon: “Do not come back, you Nazi psychopaths! Unbelievable sick evil people! Intimidating people in a church during the Passover! You Gestapo Nazi communist fascists!”


Polish Pastor Chases Cops Out of Church on Easter Weekend: ‘Get Out! You Nazis!’

What else did the pastor say?

Pawlowski told the Daily Caller that authorities had been harassing him for 13 months and he’s asked repeatedly that officials not enter his church building in their capacity as law enforcement or harass and intimidate those attending services.

“If they want to talk or inspect the building, they can call me and we can arrange that,” he noted to the outlet. However, Pawlowski told the Daily Caller officials instead “preferred a method of storming” and that “they just wanted to walk in in the middle of worship.”

The pastor added to the outlet that he “asked them to get out, and they would not move. So everything started to intensify. And I raised my voice, and I said it again and again and again, and they just didn’t want to go.”

Pawlowski noted to the Daily Caller that once the officials departed, they didn’t return or ticket him or otherwise contact him. However, he told the outlet that some police officers approached him on the street “feeling ashamed for their colleagues” and told him “this was bad, there was no need for something like this.”

He added to the outlet that police especially aren’t welcome in his church with their guns, tasers, and handcuffs.

“This is unacceptable,” Pawlowski explained to the Daily Caller. “Even during the times of the Middle Ages, the knights were commanded to leave their swords outside the church; they were not allowed to enter the church. But these days, nothing is holy for those people. They just walk in like it’s a restaurant.”

He’s seen this kind of thing before

“I grew up in Poland under the boot of the Soviets, behind the Iron Curtain,” Pawlowski added to the outlet. “What I see right now, I see everything escalating and moving to the new level. They’re acting just like the Communists were acting when I was growing up when the pastors and the priests were arrested, and some were murdered. Many were tortured.”

“That’s why I say what I say,” he explained to the Daily Caller. “Because I see a repetition of history.”

Pawlowski also told the outlet his phone has been ringing “nonstop” with supportive messages and that he hopes his actions offer others hope and courage to stand up.

“I simply say, ‘Enough.’ And I want – I hope – that this video that so many people are talking about will give courage to other clergymen and other business owners to kick those Nazis out,” he said.

As for COVID-19’s dangers, he said he’s “not afraid of the disease because my God is bigger, and I pray for the people that are still sick, and that they recover. I don’t live a life of fear, because I have hope.”

Famed pastor condemns ‘woke’ culture that is creeping into evangelical churches: ‘Deadly’ for the Gospel