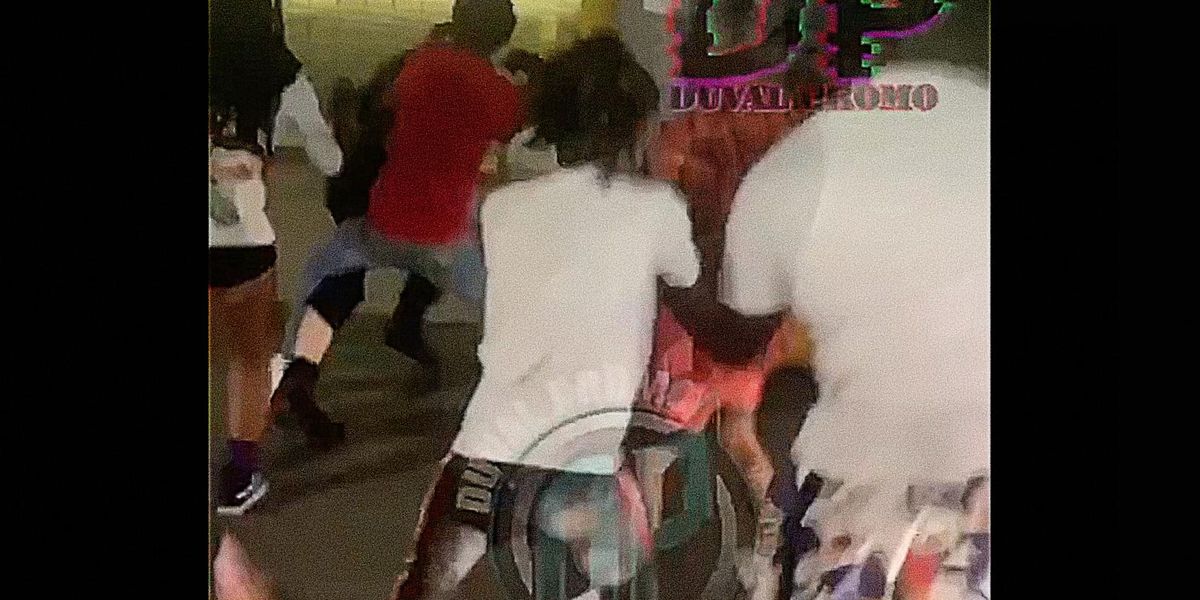 An unruly mob attacked a Jacksonville, Florida, police officer who responded alone to a call of shots fired, according to
WJAX-TV.

The mob swarmed the officer and hit him with their fists and kicked them with their feet as some cackled that the attack had been caught on camera.

The Jacksonville police officer responded to a call of shots fired in the Brooklyn area Thursday night.

The lone officer reportedly rushed to the scene because it was “a potential active shooter situation.” He approached a crowd where he thought the shots were coming from.

In a statement on the incident, Steve Zona, president of the Fraternal Order of Police in Jacksonville, said, “Our police officer was actually responding to a report of gunshots, shots being fired. So equate that to a potential active shooter situation.”

“When he got down there to try and get people to disperse, one of the people from the crowd actually attacked our police officer,” he added.

Social media video captured the moment that a crowd surrounded the lone officer and pushed him to the ground, shouting expletives and attacking him.

In the video, the unnamed officer — who has a rifle strapped to his back — is able to climb to his feet as the person recording the now-viral video runs off laughing about the incident and how he caught the heartless attack on video.

The video does not show what took place immediately following the attack on the officer.

Zona also expressed his disappointment that no one stepped in to help the lone officer during the attack, but according to a new report from WTLV-TV, “a takedown and arrest of the suspected attacker followed.”

Police officer attacked by mob after responding to shots fired call. This is where we’re at now? https://t.co/8ZbxGIQc8u

What else do we know about this?

The station on Tuesday
reported that authorities arrested 23-year-old Jermisha Ramsey in connection with the attack and charged her with assaulting a police officer, resisting arrest, and street fighting.

WTLV that the officer suffered “multiple abrasions” in the attack.

According to the arrest report, police initially responded to a call in the area of 600 block of Oak Street regarding multiple vehicles being burglarized around 2:10 a.m.
Upon arrival, one of the complainants advised the JSO officer she’d heard gunshots down the road. JSO says the officer saw a gathering of people near Edison Avenue and an active fight.
The officer requested backup and approached the fight with his police rifle slung on his back. The report says he saw about eight people fighting and arguing in the middle of the road and gave them loud, verbal commands to stop. The officer had to physically separate two individuals, one of whom was later identified as Ramsey.
The officer attempted to detain Ramsey for failing to obey his verbal commands but was unsuccessful. The officer attack that was recorded and posted to social media is redacted entirely from the police report.
However, the report goes on to say the officer picked up his glasses and gave chase, eventually catching Ramsey, throwing her on the ground and handcuffing her.

Tulsi Gabbard issues plea to Americans to reject ‘racialization’ of everyone and everything: ‘We are all children of God’

Meghan McCain tears into LeBron James on ‘The View’ for his tweet: ‘Putting that police officer’s life in danger’

Donald Trump returning to social media within 3 months on his own platform to ‘redefine the game’: top aide