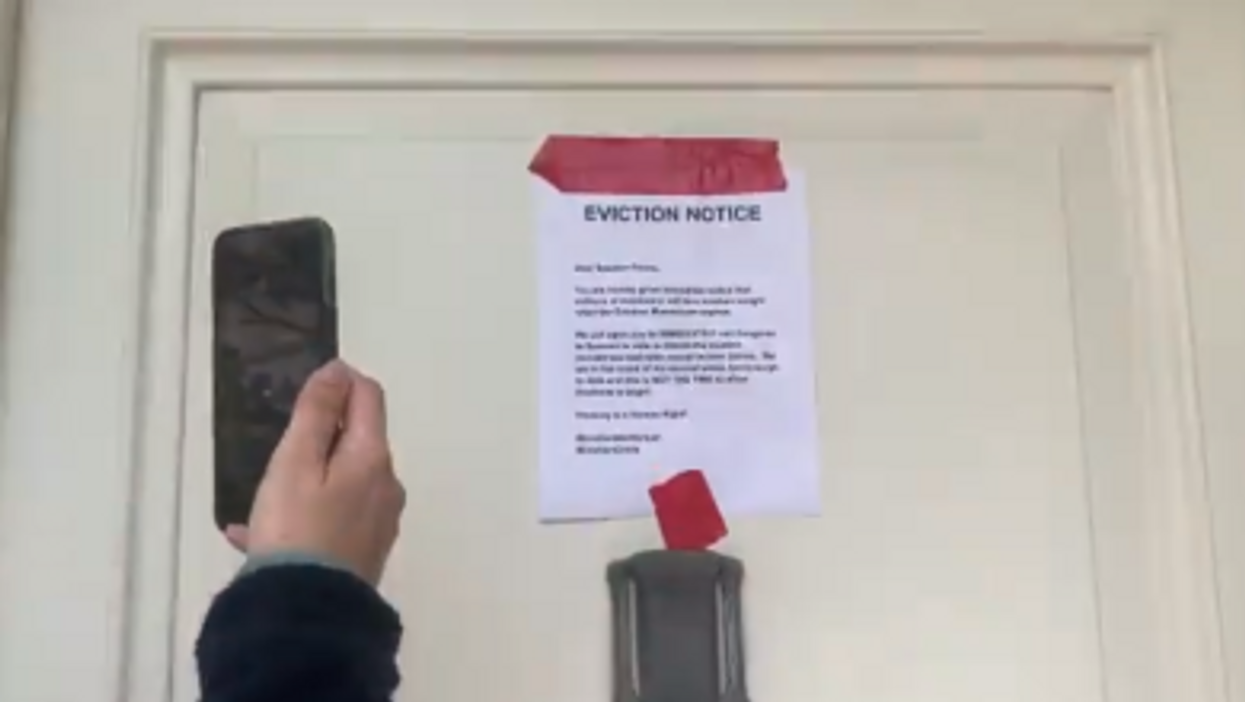 A nationwide eviction moratorium expired on Saturday after Congress failed to pass new legislation before the House of Representatives adjourned for its seven-week summer vacation on Friday. Progressive activists and lawmakers lashed out at Democratic leadership, including the Biden administration and House Speaker Nancy Pelosi, for not extending the moratorium and protecting the millions of Americans at risk of eviction.

Progressive Reps. Ilhan Omar (D-Minn.), Ayanna Pressley (D-Mass.), and Cori Bush (D-Mo.) allegedly spent the night on the steps of the Capitol Friday as a form of protest against the eviction moratorium not being extended by Congress.

“We could have extended it yesterday, but some Democrats went on vacation instead,” Bush tweeted on Saturday. “We slept at the Capitol last night to ask them to come back and do their jobs.”

We could have extended it yesterday, but some… https://t.co/4U8d1P1wNr

Fellow lawmakers did not return, and instead left town for a seven-week recess without holding a vote or extending the federal eviction moratorium.

Rep. Alexandria Ocasio-Cortez (D-N.Y.) blamed Democratic leadership for allowing the nation’s eviction moratorium to expire. Ocasio-Cortez bashed President Joe Biden’s administration for not being “forthright” about engaging Congress to act until it was already too late.

Ocasio-Cortez noted that the blame should be laid at the feet of Democrats, who control the House.

“There was frankly a handful of conservative Democrats in the House that threatened to get on planes rather than hold this vote,” Ocasio-Cortez said in an interview on CNN’s “State of the Union.”

“We have to really just call a spade a spade,” Ocasio-Cortez told CNN host Jake Tapper on Sunday. “We cannot in good faith blame House Republicans when Democrats have the majority.”

Ocasio-Cortez also slammed the Biden administration for dragging their feet on encouraging Congress to extend the moratorium. The Biden administration finally called on Congress to extend the moratorium “without delay” last Thursday, which was a full month after the Supreme Court ruled that the Centers for Disease Control and Prevention could not continue the policy beyond July 31 without congressional action.

“We asked the Biden administration for their stance and they were not being really forthright about that advocacy and that request until the day before the House adjourned,” Ocasio-Cortez said. “The House was put into a needlessly difficult situation.”

CNN’s @jaketapper: “Who’s to blame” for the failure to extend the eviction moratorium?

House Speaker Nancy Pelosi (D-Calif.) attempted to explain why the vote fizzled, “We only learned of this yesterday — not enough time to socialize it within our caucus as well as to build the consensus, especially in a time of COVID.”

NBC News reports of a rift between Pelosi and Rep. Maxine Waters (D-Calif.) regarding the vote to continue the eviction ban, “House Speaker Nancy Nancy Pelosi and the sponsor of a measure to extend the ban, Rep. Maxine Waters, D-Calif., were at odds Friday over whether to hold a vote and force members to make their positions publicly known. Waters wanted a vote, which would have allowed progressive activists to blame specific Democratic lawmakers for its failure, while Pelosi didn’t want to expose some of her caucus members to the wrath of the base, according to the second aide.”

Progressive activists were furious that Pelosi was not able to extend the moratorium before the long recess and held a protest at the House speaker’s home in San Francisco.

Approximately 40 protesters showed up at Pelosi’s home on Saturday to serve an “eviction notice” to the speaker.

“The reason that we’re at her house is that she has a beautiful mansion in Pacific Heights in San Francisco, and it shows how out of touch she is with the people that are facing a situation [of eviction],” Christin Evans, one of the activists outside of Pelosi’s home, told Fox News. “We wanted to essentially send her a message that we want her to reconvene Congress to take a vote [to extend] the eviction moratorium.”

Delivering an “eviction notice” to @SpeakerPelosi at her San Francisco mansion to ask she reconvene Congress to ext… https://t.co/2Px5uYpfvL

Dear Speaker Pelosi, you are hereby given immediate notice that millions of Americans will face eviction tonight when the eviction moratorium expires. We call upon you to immediately call Congress to session to vote to extend the eviction moratorium and keep people in their homes. We’re in the midst of the second-worst COVID surge to date and this is not the time to allow evictions to begin. Housing is a human right #evictionmorotorium #eviction crisis.

In solidarity with all people behind on rent and @CoriBush, we’re out at @SpeakerPelosi ‘s mansion delivering an “e… https://t.co/hsHkvUz5HT

On Friday, Pelosi said, “We’re not going away from this issue, whether it’s now or shortly thereafter.”

A new study published on Wednesday by the Aspen Institute claims that more than 15 million people living in the U.S. are behind on their rental payments and could face eviction when the moratorium lapses.