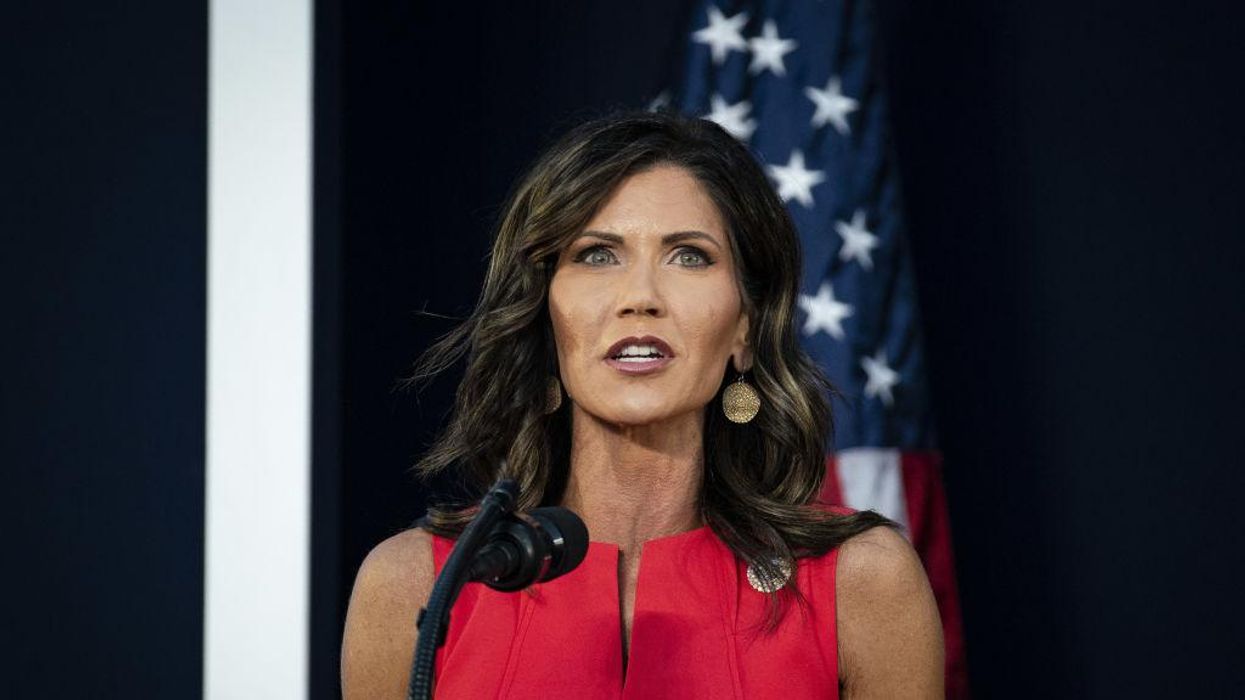 South Dakota Gov. Kristi Noem (R) reportedly has not yet made up her mind on whether to sign a controversial bill that would ban transgender athletes from participating on sports teams according to how they identify.

The Daily Caller reported Friday that Noem is “wavering” on whether to sign the bill after facing pressure from the NCAA, the South Dakota Chamber of Commerce, and threats from Amazon to abandon a plant in Sioux Falls if she should sign it.

The legislation, H.B. 1217, would prohibit any student at a state school from joining a sports team that does not match their biological sex. On International Women’s Day on March 8, Noem publicly stated she was “excited” to sign the bill, which proponents say would protect women’s sports by ensuring men taking hormones to transition to female would not be allowed to compete against women.

However, in an interview with the Argus Leader published Thursday, Noem said she was still reviewing the bill and that she would make a final decision on whether to sign it “probably in the next two to three days.”

“It’s a complicated bill even in that there are parts of it that aren’t written so well,” she said, without specifying the provisions of the legislation to which she referred.

TheBlaze reached out to Gov. Noem’s office for clarification but did not receive comment.

The Daily Caller received confirmation from Noem’s communications director Ian Fury that the governor has not yet made up her mind on the bill.

“Governor Noem is still weighing 106 pieces of legislation that have action due next Friday, and that is one of them,” Fury said.

The legislation faces opposition from business leaders and collegiate sports officials, who say it could result in millions of dollars of economic losses for South Dakota.

Dave Zimbeck of the Sioux Falls Sports Authority told the Argus Leader earlier this month that the NCAA could cancel its March Madness tournaments in Sioux Falls because of the bill. The proposed law would likely be viewed as discriminatory by the NCAA, violating its policies concerning diversity.

“Ultimately, that’s deemed under the NCAA policies as discriminatory. And that would put us on the outside looking in, and ultimately we would lose out on a bid we were seeking, and we would also lose out on a tournament that’s already been awarded to us,” Zimbeck said. “This bill as it’s written casts a big shadow on our ability to host a tournament.”

In a statement to the Argus Leader, the NCAA reaffirmed its commitment to supporting transgender athletes and said it is closely monitoring policies that could impact their participation in collegiate sports.

In previous years, NCAA sports tournaments hosted in South Dakota have generated millions of dollars in revenues for local businesses.

Zimbeck also noted that schools that follow the law but violate NCAA policy could lose their accreditation with the NCAA and their ability to compete against other schools outside South Dakota.

“It’s predictable – it’s very alarming, but it’s predictable – that the colleges under the Board of Regents’ control would be put in a position where they have to disconnect or walk away from the NCAA and lose their accreditation and ultimately have no place to compete,” Zimbeck said. “Without a conference affiliation, without an NCAA membership, the schools have no place to play, and now we could see where we essentially have to eliminate athletics completely from state-run colleges or universities, which is extremely alarming.”

The bill’s backers in the state legislature acknowledged to the Daily Caller that opposition was “inevitable” but said that sometimes doing the right thing means standing up to “bully tactics.”

“I think the reality of it is that if you stand up for the right thing, and this is the right thing, that good will come of it,” Republican bill sponsor state Rep. Rhonda Milstead said, “that bully tactics aren’t gonna work if you hold your ground. And that’s what those are, bully tactics.”

The South Dakota state constitution empowers the governor to send bills “with errors in style or form” back to the legislature with specific recommendations for change. Milstead speculated that Noem may attempt to use this power, but dismissed the strategy as inappropriate.

“She’s the executive branch, the legislature is the one that passes laws,” Milstead said. “So if she wants to change the language, it has nothing to do with style and form. It has everything to do with content, context.”

“That’s not appropriate,” she added. “It’s really going outside of the powers of the branch. That’s not what the executive branch is for.”

‘Guess what … YOU are the bigot’: Dave Rubin torches Sarah Silverman over INSANE Caitlyn Jenner rant