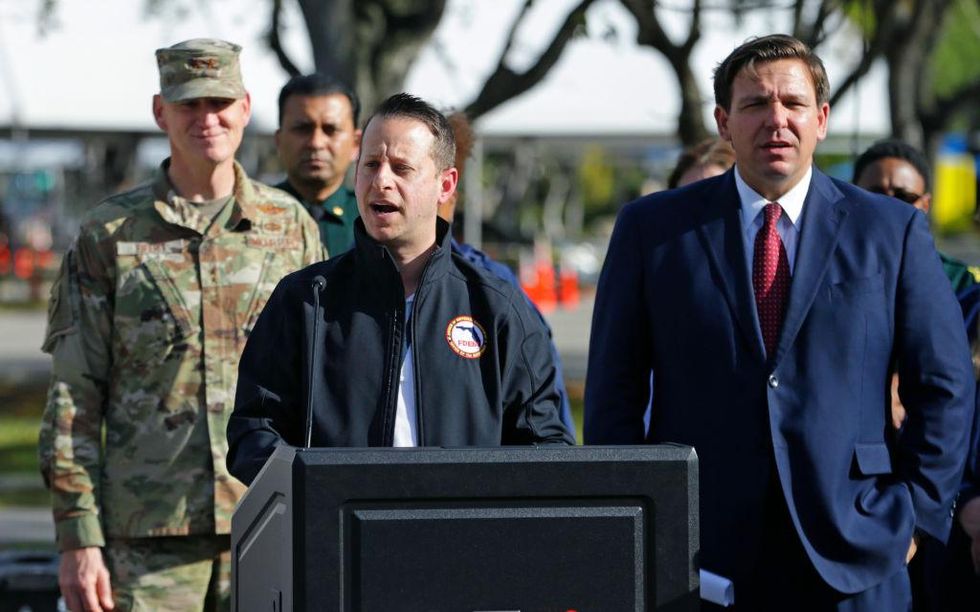 A top Democratic official in Florida is warning fellow Democrats not to believe COVID-19 “conspiracy theories” about Republican Gov. Ron DeSantis’ handling of the coronavirus pandemic.

Jared Moskowitz, Florida’s outgoing director of Emergency Management and the official responsible for directing the response to the pandemic under Gov. DeSantis, told Politico’s Marc Caputo that Democrats should beware of spreading COVID-19 conspiracy theories that confirm their biases.

“But Democrats should not be so naive to think that they don’t accidentally participate in things like that — for instance when they forward things around that falsely claim Florida has more deaths than New York when it comes to coronavirus. That is just not supported by the data,” he added.

Moskowitz, 40, is a Democrat who previously served as a state representative and Parkland city commissioner. He is a graduate of Marjory Stoneman Douglas High School, which three years ago was the scene of a school shooting that left 17 people dead and 17 others wounded. In 2018, after winning the governorship, DeSantis tapped Moskowitz to lead Florida’s Emergency Management Department and join the governor’s cabinet. He is retiring on April 30 after 15 years of public service to spend more time with his family.

“He’s worked incredibly hard. He’s done a fantastic job. I think Florida has the best emergency response in the country, I think we’ve done the best in terms of logistics, both in terms of preparing for and responding to storms, as well as responding to the COVID-19 pandemic and I think Jared was a big reason why,” DeSantis said of Moskowitz at a news conference Monday.

Moskowitz exits the DeSantis administration just as the governor is receiving national attention and partial vindication for his governance during the pandemic. Florida, under DeSantis’ leadership, never enforced draconian lockdown policies and stay-at-home orders to slow the spread of the coronavirus. He kept the beaches open, ignoring outcry from his critics, and Florida was one of the first states to reopen bars and restaurants at full capacity last December. Florida never issued a statewide mask mandate. Schools were opened last July and have remained open for in-person learning since.

DeSantis wanted to keep businesses open and Florida targeted its coronavirus policies to protect the most vulnerable populations while allowing everyone else to practice coronavirus safety measures freely without mandates from the state. The facts appear to vindicate his governance.

FL’s the third most populous state but has the 27th highest death rate —better than every major blue… https://t.co/5Xu4TqciBS

Florida is the third most populous state but has the 27th highest coronavirus death rate nationwide. According to Caputo, Florida is about 16th in vaccination rates, ahead of New York, California, and Texas. And the unemployment rate in Florida is 6.1%, ahead of every other major blue state and every large state.

Additionally, hospitals in the state were never overwhelmed despite dire predictions from health experts.

And then there’s unemployment, a major driver of DeSantis’s popularity in the GOP. Florida’s unemployment rate… https://t.co/2urnj1A5hl

DeSantis’ detractors have accused his administration of covering up the true number of coronavirus deaths, a bogus conspiracy theory chiefly promoted by a disgruntled former employee of the state named Rebekah Jones. Jones previously worked as a data analyst for the state Department of Health and was fired from that position for insubordination and for altering the state’s coronavirus dashboard without authorization. She recently falsely claimed that Florida had surpassed New York in total COVID-19 deaths and accused DeSantis’ administration of hiding that data.

The CDC debunked this conspiracy theory in response to a question from Caputo.

Though Moskowitz did not name Jones, he made a reference to her claims in his comments about Democrats believing conspiracy theories.

“We would never have gotten away with that for 15 days in Florida, let alone six months.”