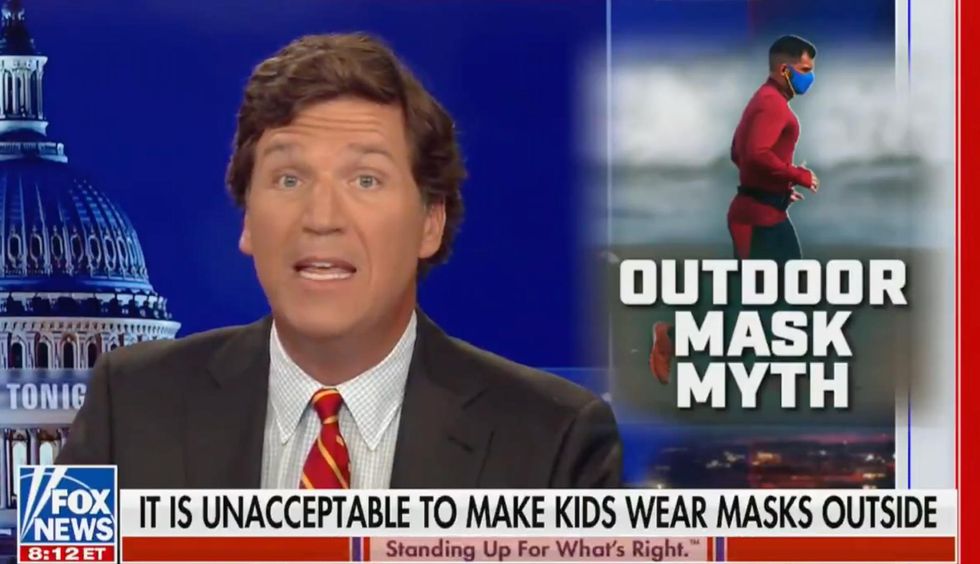 Carlson’s advice comes the same week that the CDC announced that the risk of spreading COVID-19 outside is low in most cases.

During a segment on Monday’s “Tucker Carlson Tonight,” the host said that people should call authorities if they see children wearing face coverings outside — a move that he called “unacceptable,” “dangerous,” and more.

Carlson explained that “neurotic” liberals are complicit in spreading coronavirus fear by wearing masks while outside and insisted that it was his viewers’ job to “brush them back and restore the society we were born in.”

“As for forcing children to wear masks outside, that should be illegal,” Carlson opined. “Your response when you see children wearing masks as they play should be no different from your response to seeing someone beat a kid at Walmart. Call the police immediately. Contact child protective services. Keep calling until someone arrives. What you’re looking at is abuse, it’s child abuse, and you are morally obligated to attempt to prevent it.”

Daily Beast contributing editor Justin Baragona shared a clip of Carlson’s remarks on Twitter and captioned it, “Tucker Carlson is now telling his audience to harass people who wear face masks outside. If they see children wearing masks, Tucker says the response should be no different than when you see a kid being abused — ‘call the police immediately, contact child protective services.'”

Tucker Carlson is now telling his audience to harass people who wear face masks outside.

If they see children wear… https://t.co/LYi6TeesQx

What has been the response?

“Tucker Carlson wants to cancel parents who make the decision to have their child wear a mask,” Rep. Ted Lieu (D-Calif.)
wrote on Twitter in response to Carlson’s remarks. “The right wing cancel culture is out of control. Who are what are they going to try to cancel next? Major League Baseball? Oh wait …”

Tucker Carlson wants to cancel parents who make the decision to have their child wear a mask. The right wing cancel… https://t.co/gKJtOM35Bo

Former Michigan libertarian representative Justin Amash tweeted, “If you don’t want to wear a mask outside, then don’t,” Amash wrote on Twitter. “If you do want to, then go ahead. Respect other people’s choices, including the choices of parents. Absolutely do not call the police or contact child protective services. Leave people alone as you want to be left alone.”

If you don’t want to wear a mask outside, then don’t. If you do want to, then go ahead. Respect other people’s choi… https://t.co/cACnL5S2Nc

During an appearance on CNN, the infectious diseases expert said, “I think that’s self-evident that that’s bizarre. I don’t want to get into a back and forth with Tucker Carlson, but it’s almost self-evident. … You’re talking about child abuse, really? Come on.”

Joseph Robertson, executive director of Citizens’ Climate International, tweeted, “Tucker Carlson is attempting to coordinate terrorist attacks on American soil. He is inciting violent acts, specifically intended to put lives at risk, even as a virus that has killed more than 575,000 Americans & 3 million people around the world mutates & becomes more dangerous.”

He added, “What Tucker Carlson says in this act of incitement could lead directly to thousands of deaths & also to incidents of direct physical violence. Fox News has an absolute moral & legal responsibility to end his television career & turn him over to prosecutors.”

CNN analyst and former FBI special agent Asha Rangappa added, “This is really, really dangerous. Listen to his tone of voice, and what he’s instructing. He’s moving from his viewers passively consuming his propaganda to having them act on it — against their neighbors. He’s testing his audience’s compliance.”