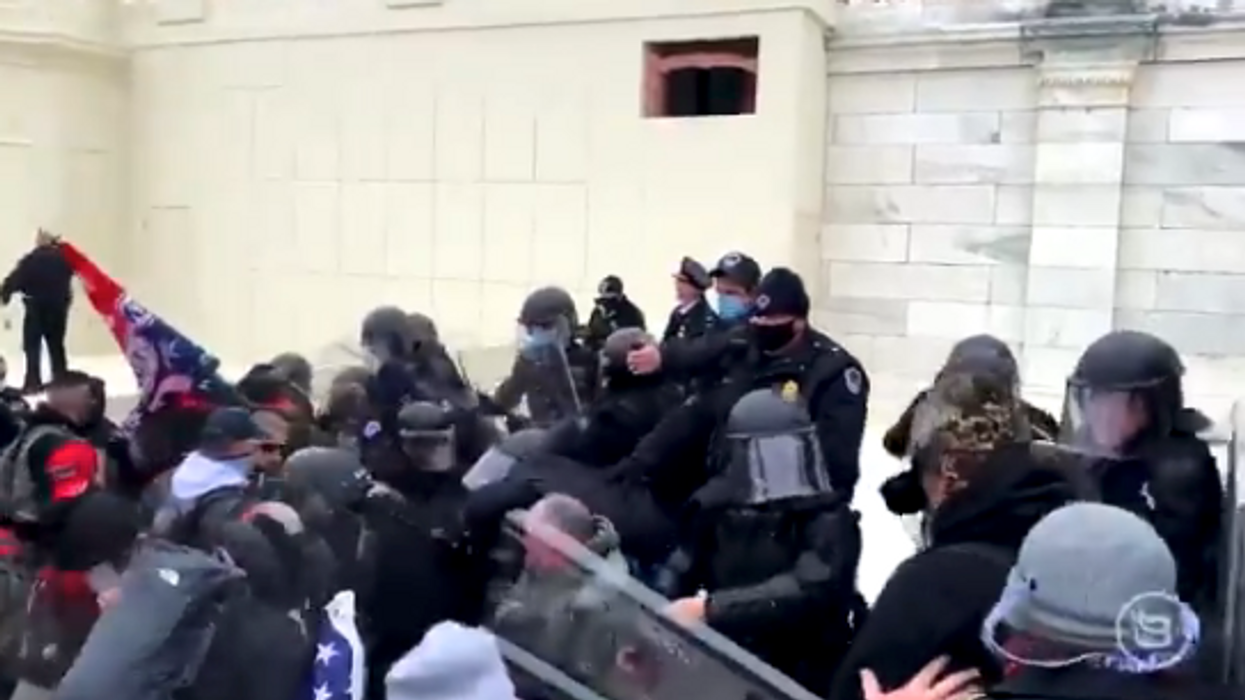 As evening drew near, Trump supporters protesting outside the U.S. Capitol reportedly attacked a media area, proceeding to seize and destroy camera equipment.

Trump supporters moved in and attacked a media section near the Capitol Building and are trashing their cameras and… https://t.co/pN2E18XxGM

In a video posted to Twitter late Wednesday afternoon, President Trump told supporters protesting the election at the U.S. Capitol to “go home in peace.”

“I know your pain, I know you’re hurt,” the president said to his supporters, who believe the 2020 election was fraudulent. “But you have to go home now. We have to have peace.”

Supporters of President Trump continued to make their way through the halls of the U.S. Capitol after breaching security Wednesday afternoon. One broke into Democratic House Speaker Nancy Pelosi’s office and kicked up his boots on her desk.

President Trump once again called for an end to the violence at the U.S. Capitol as the situation has progressively worsened.

I am asking for everyone at the U.S. Capitol to remain peaceful. No violence! Remember, WE are the Party of Law & O… https://t.co/XWZnbZWwze

He was joined by Vice President Mike Pence, who tweeted that the “violence and destruction taking place at the US Capitol Must Stop and it Must Stop Now.”

One person has reportedly been shot inside the Capitol Building. Based on video of the incident, a young woman appears to have been seriously injured in the neck. Warning: The video is extremely graphic and may be upsetting to some viewers.

There is currently some confusion over whether additional law enforcement are on their way to protect the U.S. Capitol as protesters have breached the building with the full Congress present.

NBC News reported that House Speaker Nancy Pelosi (D-Calif.) and Washington, D.C. Mayor Muriel Bowser requested National Guard troops to come and clear rioters, but others have reported that the request has either been denied or not yet granted.

Vice President Mike Pence has reportedly been evacuated from the U.S. Capitol amid the escalating situation, as some individuals protesting the 2020 election results breached security and entered the House and Senate chambers.

Video from within the House chamber showed that lawmakers had been cleared from the room and protesters were inside. One protester appeared to be engaged in a standoff with police.

President Trump called on supporters protesting outside the U.S. Capitol to respect law enforcement and “stay peaceful,” as reports surfaced showing groups of protesters fighting with police and inside the Capitol Building.

Both chambers of Congress went into recess and the U.S. Capitol was reportedly placed on lockdown Wednesday afternoon as Trump supporters reportedly breached security and entered the Capitol Building.

BlazeTV reporter Elijah Schaffer posted video showing a small group of individuals fighting with police inside the building. At one point, some were right outside the Senate chamber as lawmakers convened inside.

“Full anarchy at this ‘mostly peaceful’ demonstration,” Schaffer wrote. “The people have pushed through & are storming to main chambers.”

Hundreds of Trump supporters breached security barricades and stormed up to the U.S. Capitol in Washington, D.C., as both chambers of Congress convened to affirm the Electoral College votes cast in the 2020 election Wednesday afternoon.

Thousands had traveled from out of state to gather in Washington in protest of the election, which President Trump and his allies have maintained was fraudulent.

Things appeared to carry on peacefully earlier in the day, but as the joint session of Congress kicked off in the early afternoon, a large group of individuals appeared to storm through outer barricades surrounding the Capitol building, where lawmakers deliberated inside.

Hundreds of Trump supporters have stormed the barricades at the back of the Capitol and are marching toward the bui… https://t.co/3VEdyaOR4r

Then, BlazeTV reporter Elijah Schaeffer posted video as the group reached the outside of the building and were confronted by police.

“Trump supporters have breached the Capitol building, tearing down 4 layers of security fencing and are attempting to occupy the building — fighting federal police who are overrun,” he tweeted. “This is the craziest thing I’ve ever seen in my life. Thousands, police can’t stop them.”

BREAKING: Trump supporters have breached the Capitol building, tearing down 4 layers of security fencing and are at… https://t.co/ldYHmHplxV

More video from the scene posted on social media showed a large group of individuals continuing to wrestle with law enforcement outside the U.S. Capitol.

Trump supporters got into fights with the Capitol Police after they tried to enter the Capitol Building. https://t.co/ZQjn3fOVtL

Politico’s Melanie Zanona reported that the Madison building on Capitol Hill was evacuated as a result of the increasingly hostile protests.

DEVELOPING: The Madison building on Capitol Hill is being evacuated, sources tell me & @sarahnferris

It is unclear at this point whether the storming of the Capitol was a coordinated or impromptu event. Interestingly, a paper notice found in the National Mall indicated that “a national militia” was being organized to “defend the Constitution and the Republic.” However, there is no evidence connecting the movement from the crowd with the notice.

This is a developing story. Check back for updates.