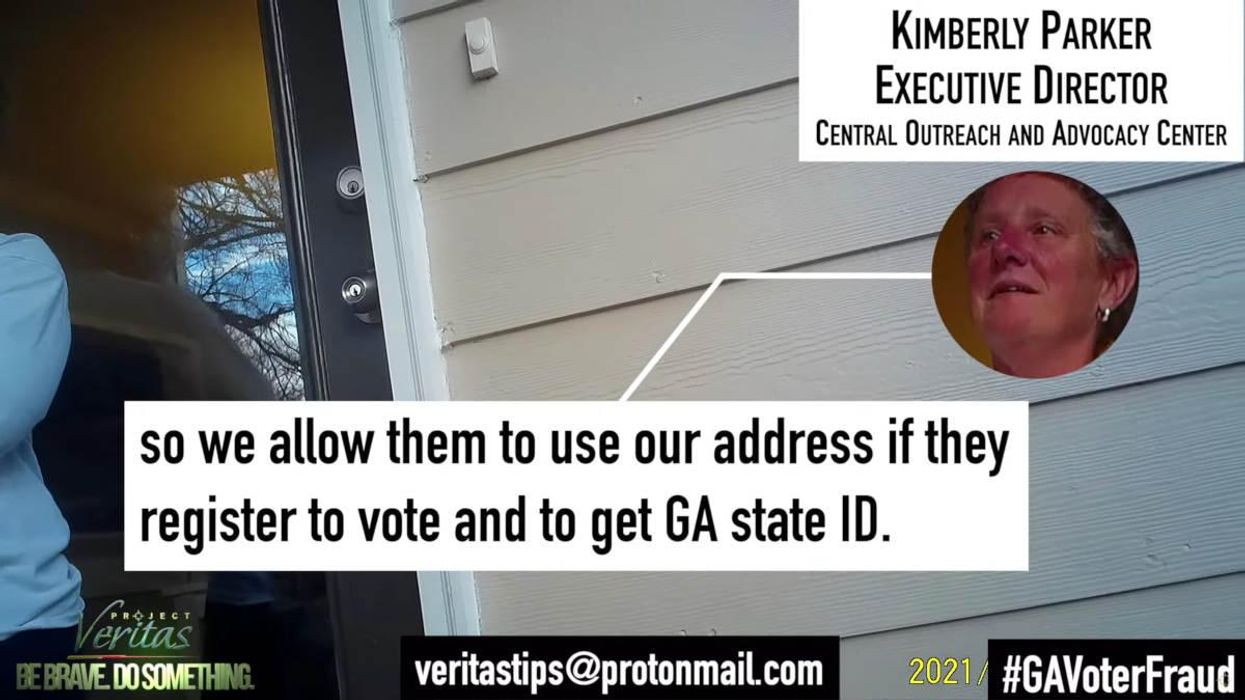 After publication, Project Veritas chief legal officer Jered T. Ede contacted TheBlaze with a complaint about the source material for this article regarding Georgia election law’s provisions for registering to vote as a homeless person.

TheBlaze used as its source the Georgia Voter Guide, “an all volunteer collaborative effort between Indivisible GA04 and the Indivisible Georgia Coalition, a non-partisan organization involved in voter registration, voter education, and voter outreach.”

“Lest there be any confusion left, this is not a Georgia state government or even local government email address as indicated by the @gmail.com domain,” Ede said. “This website, simply put, has no authority, does not cite a single GA law to support its position (nor do you for that matter), and it certainly has no power to change GA law which, as you note, requires individuals to register where they live. Notably, the COAC executive director expressly admits in our video that COAC is not a shelter and no one lives there.”

“In short, the website you cite to in your attempt to fact check our release is at best a third party’s wish list about what they hope the law may be, not what the law actually is as written or as enforced,” Ede added, before demanding a correction or a retraction from TheBlaze.

A 2011 document from the Georgia Secretary of State Elections Division describing how the state of Georgia implements the National Voter Registration Act notes that a homeless applicant who wishes to register to vote, “should use the physical address which he or she considers his or her home (for example, 1-20 West under bridge at exit 142). The mailing address should be wherever the applicant could pick up mail (for example, a homeless shelter or friend’s home). The applicant should also include a drawing of where he or she resides with the application.”

Additionally, last February Fulton County registration chief Ralph Jones told WABE-FM that an individual without a permanent address may register to vote if they can provide a location where they reside.

“Yes, you can register to vote. You just have to tell me where you lay your head,” Jones said. He added that acceptable locations include a homeless shelter or even a park bench. If they cannot name an address where they reside, they may point at a location on a map. In that case, they must provide a mailing address.

“The question for me mostly is that we would need a mailing address where we can get in contact with you,” Jones added.

Before publication, TheBlaze contacted both the Central Outreach and Advocacy Center and Emmaus House for clarification as to whether these organizations receive mail for homeless persons that use their services. TheBlaze also reached out to the Fulton County Elections Board inquiring if either organization appeared to violate the law, but has not yet received an answer.

This story will be updated again if additional comments are provided.

A new hidden camera video released by Project Veritas purports to expose illegal voter registration of homeless people in Georgia, but in fact highlights a practice that may be legal.

In the video, Georgia Central Outreach and Advocacy Center executive director Kimberly Parker admits to helping multiple homeless people register to vote using the same address. Project Veritas accused the Center of “illegally registering thousands of homeless to vote” at an address they do not reside at in Atlanta.

“We’ve done that for years!” Executive Director Kimberly Parker says… while admitting her organization has been i… https://t.co/sne9QWWfc3

Parker explains, “So, the majority of the people we serve don’t have an address, so we allow them to use our address if they register to vote and to get Georgia State ID.”

The video notes that Georgia state law requires a person to vote where they live, and that “permitting someone to use a false statement on voter registration is illegal … and punishable by up to 10 years imprisonment.”

However, Georgia election law permits homeless people to register to vote using the address of somewhere they routinely stay, such as at a shelter or a church. If they do not stay at a location with an address, they may denote a park name or the closest intersection to where they sleep as their residence. They must also provide a mailing address where they can receive mail and may use the address of a shelter, church, charity, relative, or friend to do so.

“Because you have to have proof of residence and so although we’re not a shelter, we do allow them to use 201 Washington Street,” Parker continues. “So, I can’t even begin to tell you how many people have that address on their ID. And we’ve never run into any problem with that until this election.”

She adds that “one of our board members got wind that they thought we’re doing things not on the up and up, because so many people have the address, but we’ve not heard any repercussion from it since.”

The Central Outreach and Advocacy Center is an Atlanta-based nonprofit organization headquartered in the lower level of Central Presbyterian Church. The agency provides support services to Atlanta’s homeless people, including helping them acquire government documents like ID cards or birth certificates, setting up medical appointments, and providing job and skills training to help them find work.

Also featured in the video is Adam Seeley, who is the director of social services for Emmaus House, another nonprofit organization that serves the Atlanta community, and also serves as a board member at the Central Night Shelter. Seeley states that his organization does not know how many people have used their address to register to vote.

“You know, we’ve always kind have been unsure at how many people were having us established as a mailing address in terms of a larger scope,” Seeley said.

“One day I walked into Emmaus House to pick up the mail, and Beverly was like, one of our ladies, she’s where the mail comes into our office, and she’s like, ‘you gotta get this stuff outta here.’ And I’m like, ‘what are you talking about?’

“And it was probably a couple thousand people that had our address registered as their mailing address for their voter registration,” he continued. “And I was like, oh my god, so I’m looking through it and I’m like, well this guy is dead.”

TheBlaze contacted the Central Outreach and Advocacy Center and Emmaus House with requests for comment. Project Veritas also did not immediately return a request for comment.

Twitter suspends data analyst who testified that up to 300,000 fake people voted in Arizona election