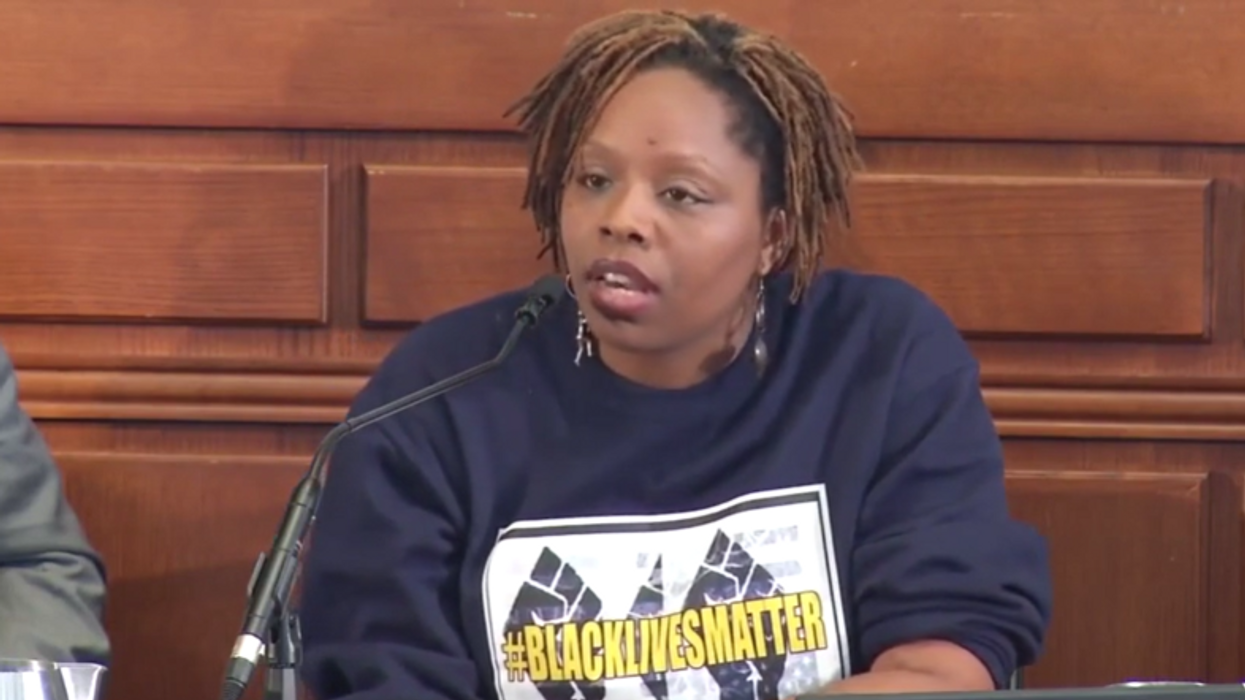 In the footage from 2015, Cullors is seen speaking at a panel entitled “Globalizing Ferguson: Racialized Policing and International Resistance,” which was hosted at Harvard Law School.

The panel is self-described as “a forum that brings together community organizers, attorneys, and academics to discuss the international dimension of racialized policing, violence and structural injustice.”

The description of the event asks, “What elements of these problems are transnational? Is there a role for transnational solidarity in fighting oppression? Can international human rights bodies provide vehicles of resistance? What are the possibilities and limitations of law and how can lawyers be good allies?”

“Panelists will draw on their recent experiences in taking these struggles to the UN and the inter-American system, and on their involvement in solidarity delegations to Palestine and Brazil.”

During the panel, Cullors calls for an “end” of Israel.

“Palestine is our generation’s South Africa, and if we don’t step up boldly and courageously to end the imperialist project that’s called Israel, we’re doomed,” Cullors tells the audience in the video, resurfaced by the National Pulse.

She then explains that Palestinian solidarity is “crucial” to the Black Lives Matter movement. She advises people to support the Boycott, Divestment, and Sanctions (BDS) movement, which is an anti-Israel campaign that seeks to economically cripple Israel.

Earlier this month, the Black Lives Matter organization announced it “stands in solidarity with Palestinians” because it is a “movement committed to ending settler colonialism in all forms.” The Boycott, Divestments, and Sanctions movement thanked BLM: “From Ferguson to Palestine, our struggles against racism, white supremacy and for a just world are united!”

In 2020, then-Secretary of State Mike Pompeo declared BDS to be “anti-Semitic.”

Cullors also says, “We could have a whole conversation about the settlements that we witnessed and the stories of murder and death at the hands of Israelis and Zionists.”

In 2015, Cullors was part of a “historic” 10-day trip to the Gaza area. While there, Cullors organized an anti-Israel demonstration in Nazareth with other “top Ferguson activists,” including Marc Lamont Hill.

“In a historic trip to Palestine, freedom fighters from Los Angeles, Miami, Chicago, New York, Ferguson, and Atlanta were able to witness firsthand the effects of Israeli apartheid and occupation, and to learn from the people who are actively resisting on the front lines,” the video’s description states.

“In Nazareth, the delegates decided to do a solidarity demonstration as a call for support of the Boycott, Divestment, and Sanctions (BDS) campaign that was called for by Palestinian civil society in 2005,” the video description also said.

Last week, Cullors resigned from her leadership role at the Black Lives Matter Global Network Foundation. Her resignation came after she was involved in several controversies, including going on a “real estate buying binge,” proudly boasting that she is a “trained Marxist,” and being overjoyed that a book she was promoting was compared to the “Little Red Book” by Chinese Communist Party leader Mao Zedong.

RELATED: Mothers say Black Lives Matter ‘benefiting off blood’ of their sons who were killed by police, say BLM founder will ‘take the money and run’

WHITLOCK: ‘The white LIBERAL is the actual bigot’

Brooklyn Center protesters pelt CNN crew with water bottle and eggs, chase them away: ‘Get the f*** out of here!’

Fiery Greg Gutfeld destroys media ‘hypocrites who pick and choose their favorite protesters’: ‘This is a red-pilled America’