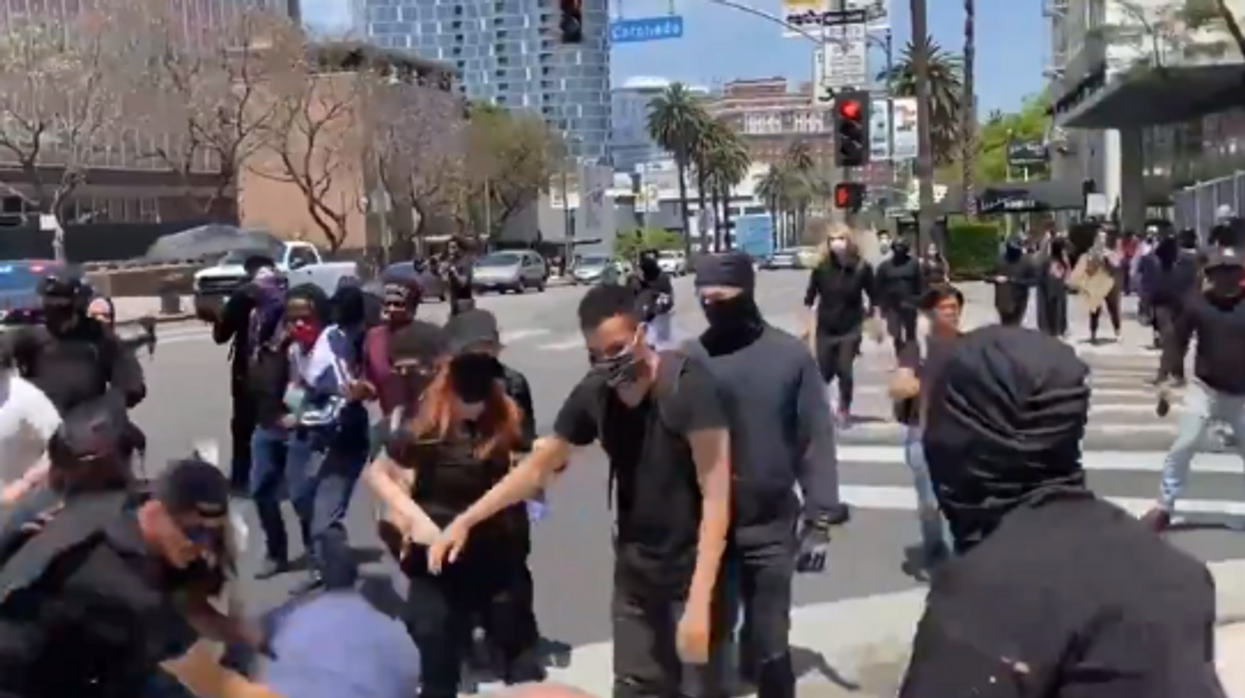 There were dueling demonstrations over trans rights in Los Angeles on Saturday afternoon, which led to several confrontations, some of which were violent. The passionate protest and counter-protest were fueled by a viral video of a woman who was upset that there was a biological man who identified as a woman in the female-only area of a California spa.

Earlier this week, reports surfaced that a protest and a counter-protest were planned for Saturday at the Wi Spa. The demonstrations featured protesters who supported the woman who was incensed that there was a biological male, who was naked in front of young girls, teens, and grown women at a spa. The woman who recorded the video was horrified that she was exposed to the man’s penis and testicles at the upscale spa in Koreatown.

The woman in the video is heard complaining to employees of the spa, “So, it’s OK for a man to go into the women’s section, show his penis around the other women, young little girls – underage – in your spa? Wi Spa condones that, is that what you’re saying?”

There were also demonstrators marching for trans rights, who argued that not allowing the man who identifies as a woman in the female area is discrimination.

A group dressed in all-black, including one person with an Antifascist Action flag, chased away a man wearing a shirt that reads: “Obey Jesus.” One person in the mob told the man, “You gotta go bro, for your own f***ing safety, you gotta go bro.”

While demonstrating, the man was sprayed in the face by one of the black bloc agitators. The mob attempted to steal a sign held by a group of street preachers, which ignited a brawl in the street. The man in the blue shirt was hit in the head with a skateboard as he was attacked by multiple black bloc members simultaneously. The street preacher had blood pouring from his head as he attempted to flee from his attackers. Another street preacher was stomped after being shoved to the ground.

Antifa attack a group of street preachers in Los Angeles. One of the antifa smashes a skateboard on the face of a p… https://t.co/xlVFpASS6T

One man is beaten on the ground, another man gets doc… https://t.co/ZRbwdG4YSo

There were several all-out brawls in the streets.

LA: More fights breaking out in the middle of the street. I have seen 1 arrest made so far. https://t.co/QHDQhiSLzX

Breaking: Fights are breaking out in the middle of the street. https://t.co/5GSEyNVWmh

Earlier today: Countless fights broke out down the street from Wi Spa (where the demonstration was held)

A young man had his sign ripped up by someone dressed in all-black, and he retaliated by pepper-spraying the individual. Several people dressed in black scurried over to attack the young man and stomped him when he was defenseless on the ground.

At the Wi Spa protest in Los Angeles, a lone young man gets his sign ripped up by an antifa. A mob of antifa then a… https://t.co/9G4MthlLmN

Newsmax correspondent James Klug, who was covering the protests, reported that a “conservative demonstrator has been cut with a knife in LA.”

Breaking: A conservative demonstrator has been cut with a knife in LA. https://t.co/D2QiEZuXju

The black bloc members, many of which are wielding umbrellas to hide their identities, harassed a member of the press to the point that he was forced to leave the area.

Outside the Wi Spa protest, antifa harasses and intimidates a member of the press. They throw water on him and forc… https://t.co/xJQGJ9nJwI

A man in the crowd used an Antifa flag to prevent a videographer from recording the Wi Spa protest. The mob then chased away the videographer and assaulted him, as seen in video shared on Twitter by Andy Ngo.

“Flank him on the right!” Watch as the mob of antifa coordinate their attack on a videographer at the Wi Spa protes… https://t.co/3ekIVhGzCY

Klug said he was attacked with a club for covering the protests.

Los Angeles: 10 minutes in to filming and I got assaulted with a club.

LAPD finally pushed back against the black bloc mob.

LAPD formed a skirmish line & clashed with Antifa & other protestors.

A heavyset man gets knocked to the ground &… https://t.co/nltkUrM9dx

Ngo shared a video on Twitter claiming that “Antifa threaten, follow & hit a Latino couple accused of ‘transphobia’ at the violent protest outside Wi Spa in Los Angeles.” One person is heard screaming, “You’re gonna get your ass knocked out!”

The crowd chanted, “Go home transphobes” at a woman, who had her hat and sunglasses stolen by the black bloc mob.

Antifa mob attacked a woman protesting peacefully outside Wi Spa in Los Angeles. The spa was at the center of a rec… https://t.co/PiJPe8XvsF

Antifa surround and scream at a middle aged woman who says her glasses were stolen. The antifa have been assaulting… https://t.co/8S48ntM1EQ