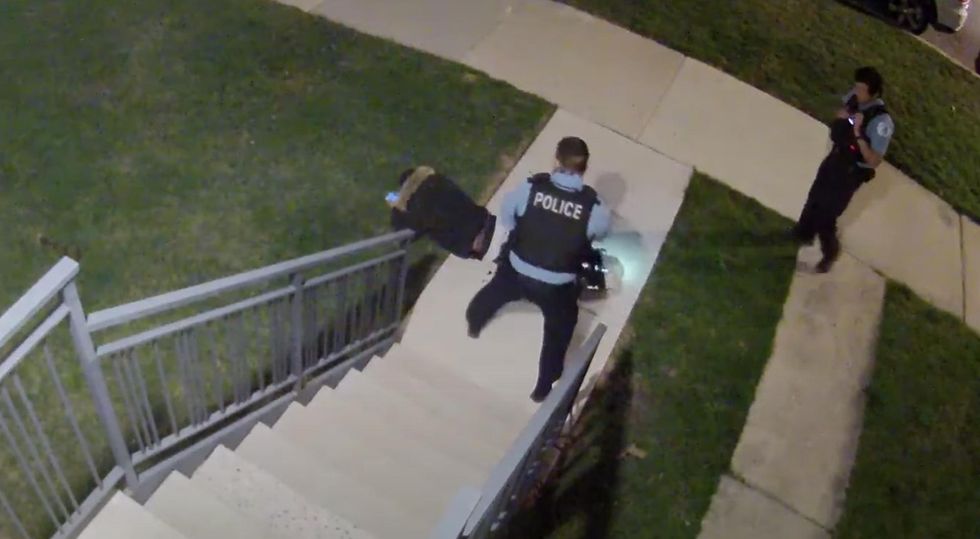 The Civilian Office of Police Accountability in Chicago released bodycam and surveillance footage of the lethal shooting of 22-year-old Anthony Alvarez in March.

Activists had immediately claimed that the death of Alvarez, a Hispanic man, was racially motivated.

The graphic video shows Alvarez being chased by a police officer identified as 29-year-old Evan Solano. A police union official later said that Alvarez had escaped from police in a vehicle the day before the shooting. Solano had spotted the man and given chase.

The video shows Alvarez stumble as he runs from the officer, then appear to toss a gun after being shot.

“Why you shooting me?!” Alvarez says after falling to the ground.

“You had a gun!” the officer responds.

A second video shows another angle of the incident from home surveillance video.

The Civilian Office of Police Accountability is still investigating the incident, but the officer has been stripped of his police duties while the probe is pending. COPA spokesman Ephraim Eaddy conceded that it is rare for such action to be taken against an officer so early in an investigation.

Police union chief John Catanzara defended the officer’s actions, saying that he likely believed Alvarez was in the act of turning towards him with the gun in his hand.

“There is nothing wrong with this shooting just because the bullet struck the offender from behind,” said Catanzara.

“It is important for the public to look at this with an open mind,” he explained. “The officer fears (he) would turn and fire because that’s the motion he was making.”

Officials have not revealed why Alvarez was being sought by police, but Chicago Mayor Lori Lightfoot claimed that he had only committed a traffic offense.

“We can’t live in a world where a minor traffic offense results in someone being shot and killed,” Lightfoot said. “That’s not acceptable to me and it shouldn’t be acceptable to anyone.”