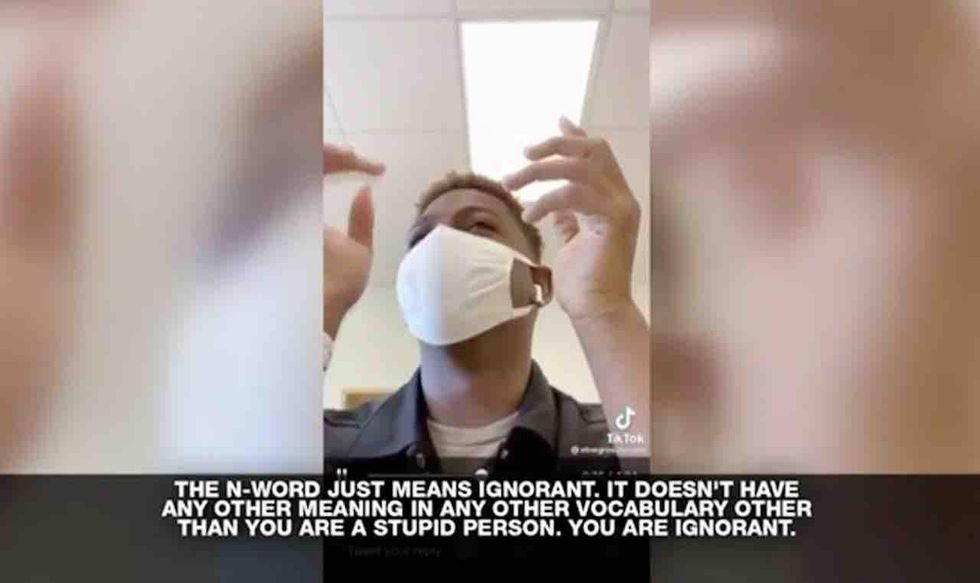 A Florida high school teacher is under fire after he told a black student the N-word merely means “ignorant” and that slaves weren’t whipped,
WFLA-TV reported.

The incident at Island Coast High School in Cape Coral was recorded on video and went viral on TikTok, with more than 2 million views, the station said.

Three videos were recorded, the News-Press reported, adding that the teacher can be heard describing the class as an advanced placement course, which provides college-level work and an opportunity for students to earn college credit after completion. Based on what the student wrote in video descriptions, the class in question is AP Government, the News-Press said.

Because the clips are shot in selfie mode, only the black student in question can be seen, although other voices in the classroom are audible. WFLA reported that the student is known only as Hector.

In one video, another student mentions slaves being whipped — but the teacher chimes in, “They wouldn’t do that to the slaves.” With that, the black student in question jumps in: “How do you know that? Were you there?” He begins laughing and adds, “Like, how do you know?”

The teacher threatens to kick him out of class for laughing because the teacher wanted the class “to have an honest conversation about it. …That’s what I want. That’s what we’re here in AP for,” the News-Press said.

In a second video, the teacher asks, “If I call somebody the N-word, what am I calling them?”

After a student is heard replying “ignorant,” the teacher agrees, the paper said: “The N-word just means ignorant. It doesn’t have any other meaning in any other vocabulary other than ‘you are a stupid person; you are ignorant. You are not well read. You are not well educated.’ That’s what it means.”

The News-Press detailed what a third video shows:

The final video in the series, called “yes…theres (sic) more,” includes other students talking about the definition of hate speech with the teacher.

One student references how someone said women don’t belong in the workplace because they belong “in the household cooking and cleaning” and calls it hate speech because it “attacks women.”

“To you, that’s hate speech,” the teacher responds.

“That’s a good point,” the teacher says in the background before the video cuts off.

WFLA said the unnamed teacher is now off the job and under investigation. However, the News-Press said when a district spokesperson was asked if the teacher was removed from the classroom, the spokesperson replied that he wasn’t authorized to explain more.

Lee County school board member Gwynetta Gittens told the News-Press she doesn’t know the teacher or student or when the incident took place — but based on the videos she saw, the district “has a lot of work to do.”

“We are very short of teachers,” she told the papers. “I understand that, but we need to vet the few that we have to make sure that they’re doing what it is that needs to be done.”

Gittens, a former teacher, added to the News-Press that she’s concerned the teacher didn’t rely on facts: “I’m not there to teach you how I personally, Gwyn Gittens, feel and what I believe. I’m there to give you facts and teach you how to dissect and pick it apart and look at it and define it and use it going forward in your future to make our world better.”

She also told the paper that students may have left the classroom “more divided than [when] they came in, and that’s where we have to look at what is our responsibility as adults in this situation and what lesson has been left in these kids.”