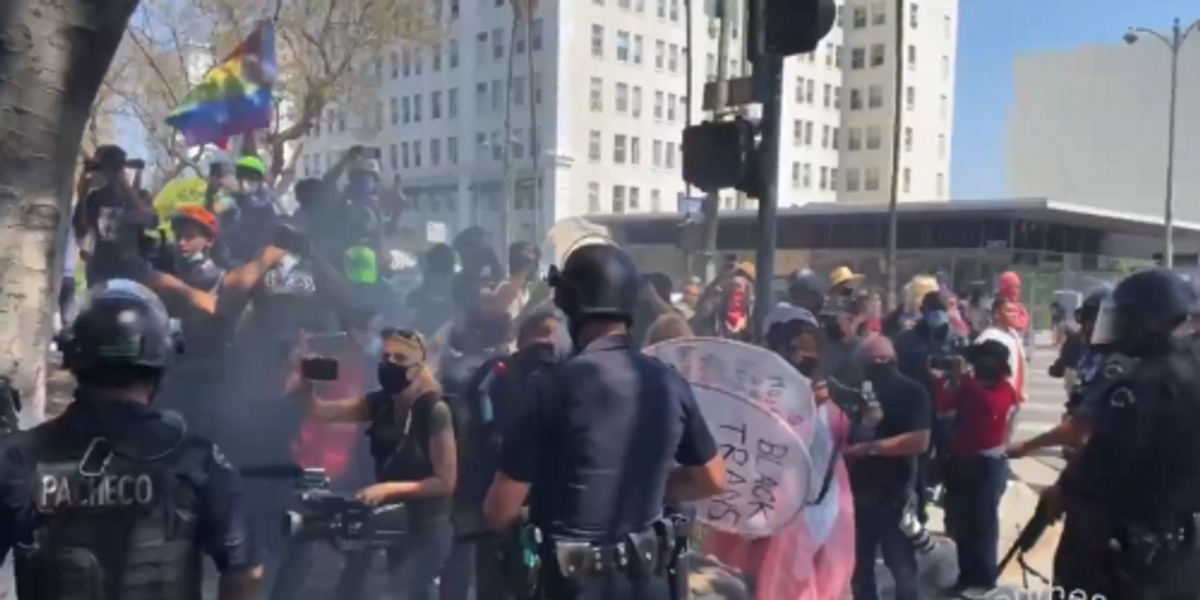 Los Angeles Police Department officers and Antifa militants engaged in violent clashes on Saturday during protests sparked by the incident where a biological man, who identified as a female, was reportedly naked at a California spa in front of women and young girls in late June. There were dueling demonstrations outside the Wi Spa in Los Angeles, which escalated when police attempted to separate a protest by Antifa and transgender activists from a counter-protest by religious demonstrators, conservatives, and feminist activists.

Independent journalist Brendan Gutenschwager covered the protests and the ensuing violence, and posted video of the confrontations, which became violent at times.

Protesters have arrived outside the Wi Spa in Los Angeles, calling for women-only spaces after an incident where a… https://t.co/K0ZTBok4I8

Police clash with Antifa counter-protesting at the Wi Spa, after several smoke bombs & water bottles were thrown at… https://t.co/d1eRLuS4a0

Antifa launch a smoke bomb at police, who bat it away as they separate opposing groups outside the Wi Spa in Los An… https://t.co/ut79SOpnQ1

Police push the crowd of counter-protesters away from the Wi Spa, giving orders to leave the area after declaring a… https://t.co/MSYUVBQ5KK

Yells of “Why are you arresting a medic?” as LAPD begin detaining people near the Wi Spa this afternoon… https://t.co/mDMkkaUiNA

An officer fired a non-lethal munition at a woman during the skirmish.

Earlier: LAPD shoot what appears to be a rubber bullet or other non-lethal munition, striking a woman a few feet in… https://t.co/lqsaHwkLJ1

Woman was just shot by a rubber bullet as she asked to please put down your guns— https://t.co/YkZUjW007l

WI SPA LA: The SOY, LARPING and OVER THE TOP DRAMATIC THEATRICS were on overload today with ANTIFA and the SJW’s in… https://t.co/IMKUWIFXxo

In a video shared on Twitter by Post Millennial editor-at-large Andy Ngo, a protester screams at cops, “Antifa’s gonna kill you, b*tch!”

An antifa member verbally threatens to kill at the violent protest in Los Angele… https://t.co/otTVSXUhgH

The LAPD released a statement saying that smoke bombs and other projectiles were thrown at its officers. The police department said “several dozen” people were arrested. The LAPD noted that knives, pepper spray, and a stungun were confiscated.

At a protest near Wilshire Bl & Rampart Bl, 2 groups clashed. Smoke bombs/projectiles were thrown at ofcrs & a disp… https://t.co/kgACG5AkZW

One Antifa group was reportedly made a plea on social media to raise funds to bail out “comrades” who were in jail. The @SocalAntifa Twitter account also said the LAPD “have always and will always side with fascists.”

Antifa are crowdfunding bail for their comrades arrested at the riot in Los Angeles yesterday. @Twitter, @CashApp,… https://t.co/ELVto0e48R

Ominous graffiti this morning on Wiltshire at the LA housing authority, a block east of WiSpa. https://t.co/1DinRifdcQ

Two parolees pull gun on group in apparent robbery attempt. But one victim has gun of his own — and shoots both assailants who...

‘He has a penis!’: Outraged woman claims spa allowed ‘naked’ man in female area ‘in front of young girls’ — because he identified as...