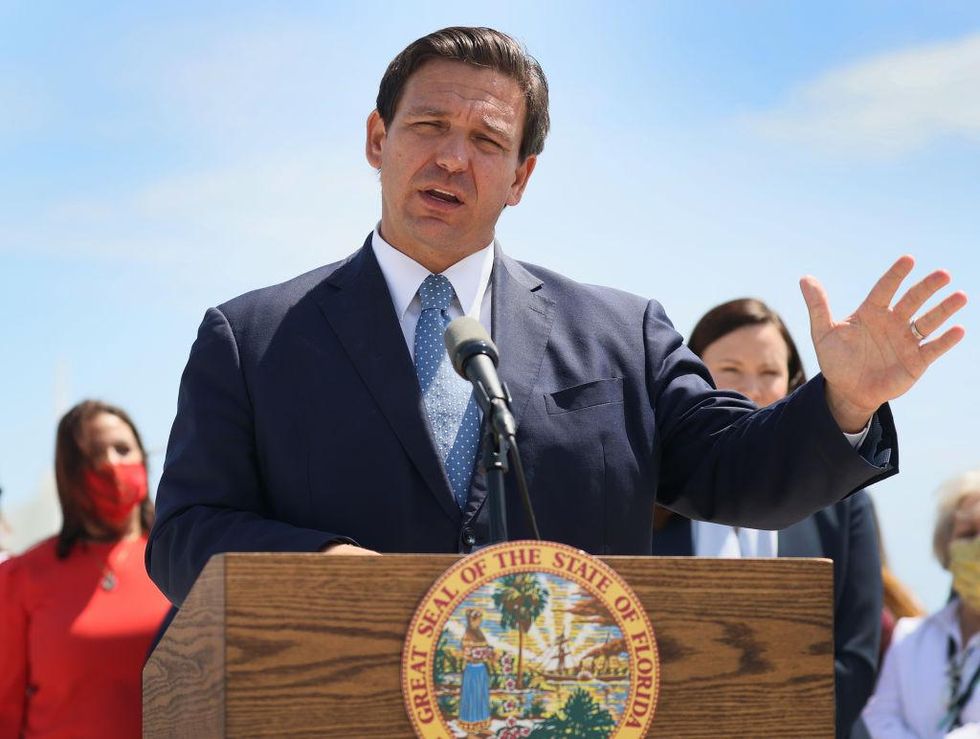 Florida Gov. Ron DeSantis (R) hammered the Centers for Disease Control and Prevention over its policies involving schools and the cruise industry that he declared to be driven by politics and not science.

During a news conference in Satellite Beach, Florida, DeSantis slammed the CDC for carrying water for school unions.

“If you look at some of the stuff that they’ve done on school openings, where they’re basically doing the teacher’s union’s bidding, when they say these kids should be masked in summer camp outdoors,” he said, the Daily Wire reported. “I’m sorry, that’s not science, that’s politics.”

Earlier this week, a report surfaced claiming that a powerful school union lobbied the CDC to delay the return of in-person learning.

DeSantis also ripped the CDC for its policies that have crippled the cruise industry, a critical economic catalyst for Florida’s economy.

The Republican governor asked if it was correct that the CDC could shut down the cruise industry, “Do you want one unelected bureaucracy to be able to have the power to indefinitely shut down a major industry in this country?”

“But we also want our cruise lines to open. The CDC has mothballed this for over a year,” he said of the health agency dragging their feet on giving cruise line companies the green light to reopen. “They said that it was going to be two weeks last March. You know the cruise industry, they wanted to do the right thing. So they’re like, ‘All right, it’s not going to be easy for us, but we’re going to do it.’ Now here we are over a year later and there’s no end in sight.”

“Now they say you can only cruise if you have 98% people show proof of vaccination, but that’s ridiculous,” he pointed out. “They’re cruising in other parts of the world where they don’t even have availability of vaccines yet, where they have much higher COVID than in the United States.”

The CDC will require 98% of a cruise ship’s crew and 95% of passengers to be fully vaccinated against COVID-19 before the vessel is approved to set sail, according to Fox News.

DeSantis noted that if cruising is not allowed in Florida, travelers will simply fly to the Bahamas or other Caribbean islands to go on cruises, and they’ll take their spending money with them.

“So that is fundamentally unfair. It makes no sense and we are suing the CDC right now,” DeSantis said. “We have a hearing coming up in federal court. But I can tell you, I want the cruises going. I want the cruise ships going; I think it’s vital for our economy. There’s tens of thousands of folks that are impacted by this issue.”

“The CDC continues to hold the cruise industry hostage. With this lawsuit Florida looks forward to fighting back against never-ending restrictions targeting one industry in our state,” a spokesperson for DeSantis told Fox News on Tuesday.

In April, DeSantis filed a lawsuit against the federal government and the CDC to allow the cruise industry to open back up.

“Cruise ships were prevented from leaving ports with passengers by a no-sail order issued by the CDC more than a year ago,” the Palm Beach Post reported. “That order was replaced on Nov. 1 with a ‘conditional sail order‘ that allows ships to sail after the CDC reviews and approves of a cruise line’s safety plan.”

“Florida is fighting back,” DeSantis said of the lawsuit against the CDC in April. “This is not reasonable. This is not rational.”

The cruise industry is a major economic contributor to Florida. According to a report from the Cruise Lines International Association, a cruise line trade association, there were nearly 14 million U.S. cruise passengers in 2019, about 60% of the travelers embarking on their trips through ports in Florida. Passengers, crew, and cruise lines combined to directly spend $9 billion in Florida, the report added. The cruise industry provided Florida with 159,000 jobs and $8.1 billion in wages and salaries, the report found.

DeSantis then explained how not having stringent and lengthy lockdowns has been an economic sparkplug to the Sunshine State.

“You have a surplus of jobs, and particularly in restaurant, lodging, hospitality, that people want to hire,” he stated. “I mean, you see these signs all over the place. Look, that’s a good problem to have. But we also just want to make sure, look, if you’re really unemployed, can’t get a job, that’s one thing, but making sure that you’re doing your due diligence to look for work and making sure those incentives align better.

“But I can tell you this, our state was predicted to get hit worse on COVID economically than any other state because of our service economy and our tourism base,” DeSantis added. “And what we were able to do by keeping Florida open, we saved hundreds of thousands of jobs in the restaurant, hotel, hospitality industry. We saved thousands of businesses. You know how I know that? Because every time I go out, someone will come up to me and say, ‘Thank you for saving my job,’ or ‘Thank you for saving my business.'”

“So we’ve been able now with 4.7% unemployment, that’s significantly less than the national average of 6% and way less than lockdown states like New York and California have,” he said.

“So we’re doing it right,” he stated. “We obviously want to make sure those folks are able to succeed in terms of getting the people they need, but just think of where we could be. I mean, this is a good problem to have compared to seeing people — in some parts of the country, these businesses are dead. They’re never coming back.”

“This is the heavy hand of government crushing family businesses, ruining jobs and destroying millions of people’s lives,” DeSantis declared. “We chose another path in Florida; it was the right path; it was the successful path, and yes, we want to make sure that these things are — there’s actually restaurants that have to close one day a week because they don’t have enough folks.”

Also on Thursday, DeSantis signed new voting legislation into law that imposes limitations on voting by mail and at drop boxes.

Florida’s bill, SB 90, imposes new limitations on mail voting, including lessening the number of elections a single vote-by-mail application covers and restricting ballot drop boxes. Only drop boxes at main office locations, not the ones at early voting locations, can be open after regular hours but all drop boxes must be physically manned by an election worker when they are accessible to voters. While they did not require in person monitoring, drop boxes did have to be under constant video surveillance previously.

Former teachers union president reveals why he went from fighting against charter schools to promoting them: ‘They’re bad for unions, not for kids’

NYC prioritized vaccines for teachers to get schools reopened. But the city can’t say how many have been vaccinated because officials didn’t bother to...