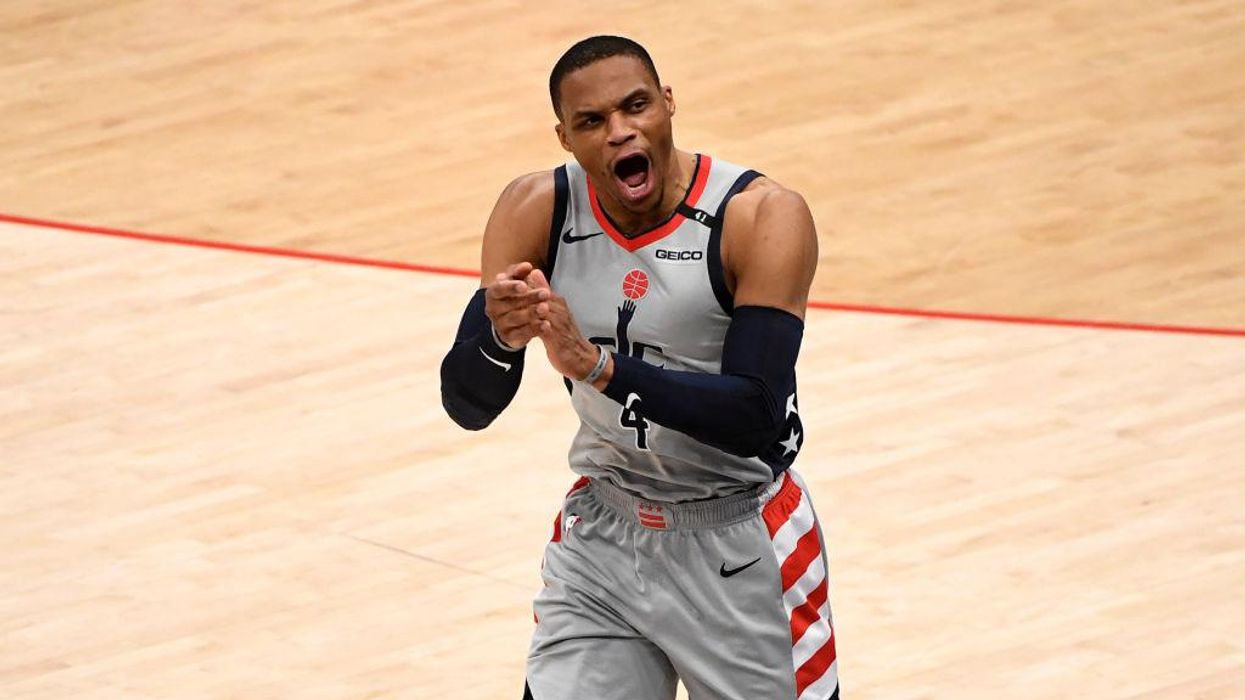 The LeBron James-Russell Westbrook marriage has a chance to rival some of Hollywood’s all-time great bad marriages. Last night, the Lakers ditched a quarter of their roster to pair Westbrook with James.

This basketball shotgun merger could be right up there with Pam Anderson and Tommy Lee’s three-year marriage, which ended with Tommy doing six months jail time.

Anyone remember Kenny Chesney’s four-month stint with Renee Zellweger? They had “different objectives” and quickly called it quits. I could see James and Westbrook splitting a few short months into the new season over differing objectives. LeBron wants to win, and Westbrook wants to pad his stats.

This marriage is just a bad idea. After they exited the playoffs in the first round, I understand why the Lakers feel they need to upgrade the roster around their aging superstar LeBron James and injury-prone superstar Anthony Davis. But acquiring Westbrook from the Washington Wizards is the wrong move.

Westbrook isn’t a winner. He couldn’t win it all with Kevin Durant and James Harden in Oklahoma City. Westbrook and his ball-hogging style cost Durant and the Thunder a 3-1 advantage in the 2016 Western Conference Finals against the Golden State Warriors. In the aftermath of that collapse, Durant defected to Golden State.

Russell Westbrook is a loser. He plays with the wrong energy, particularly given his position as point guard. Westbrook plays angry and surly. Basketball is a game of joy, especially for the guy tasked with getting everyone involved. LeBron James is a joyful competitor. He plays with the same energy as Magic Johnson and Isiah Thomas. The great playmakers wear a smile that tempers the fire within.

Westbrook is all temper. He plays with the fire of Michael Jordan and Kobe Bryant, angry, single-minded scoring assassins. Unfortunately for Westbrook, he lacks Jordan’s and Kobe’s skill and self-awareness.

He reminds me of Hollywood’s dumbest celebrity husband and marriage: Jerry Lee Lewis, the rock-and-roller who could have been bigger than Elvis. Lewis became a star in 1956 when he recorded and released the song, “Whole Lotta Shakin’ Goin’ On.” He followed that up with the mega-hit “Great Balls of Fire.”

In 1957, at the age of 22, Lewis was the equal of Elvis Presley. Lewis then married his 13-year-old second cousin, Myra Gale Brown. The marriage torched his popularity and his appearance fees for live performances. Just like Russell Westbrook, Lewis had to reinvent himself. He turned to country music, where audiences were more forgiving of his Louisiana-inspired taste in women. Lewis eventually married seven times.

Let’s see: Russell Westbrook has been married to Kevin Durant, James Harden, Paul George, and Bradley Beal, and now the Triple Double King is getting hitched to LeBron James and Anthony Davis.

Westbrook is the Great Basketball of Fire who burns down every hoops relationship he enters. He incinerates teammates, fans, and reporters. He’s just too damn angry. In 2019, he scolded a small child for touching him during a game. The same year, he beefed with a Utah Jazz fan and accused the fan of using a racial slur. For years he feuded with Daily Oklahoman columnist Berry Tramel, one of the nicest guys in sports journalism.

LeBron is marrying Liz Taylor 2.0. It’s a mistake. It looks good on paper. The Lakers need another playmaker. Westbrook can play off the ball as LeBron serves as Los Angeles’ primary ball handler. Sounds good.

Everything about Westbrook sounds good. He plays hard every night. He’s also an emotional roller coaster every night, particularly at crunch time. He’s unpredictable and a poor decision-maker.

Plus, the pressure dynamics are wrong. The pressure to win next season needs to be on Davis and James. Now the most pressure will be on Westbrook. His career legacy will be on the line. His stats fooled many of us into believing he was the second coming of Oscar Robertson. Westbrook is really a mix of Dominique Wilkins, Nate Archibald, and George McGinnis.

Westbrook is a Human Highlight Film who plays like a Tiny Big Mac. He is not one of the NBA’s top 50 players of all time. He’s an interesting gimmick.

He’ll be desperate to disprove that narrative all next season. It’s going to make it impossible for him to control his emotions. He’s backed into a corner. There will be the initial honeymoon period, and then he’ll revert to his old habits at a critical moment and cost the Lakers a chance to win it all.

The Lakers will be a great ball of fire.

‘We as a country haven’t lived up to our highest ideals’: Biden backs athletes’ right to protest during national anthem, Psaki says