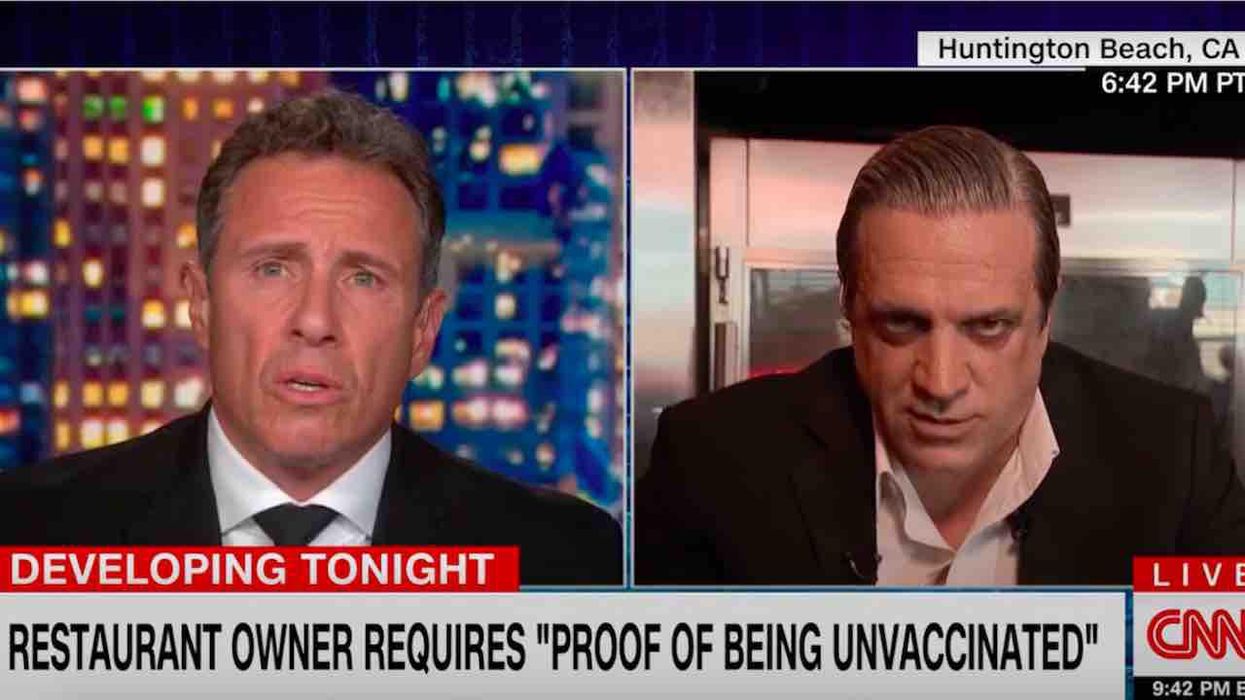 CNN host Chris Cuomo looks to be in rare form this week.

He delivered a highly animated interview Monday trying to bait freshman Republican U.S. Rep. Byron Donalds of Florida into a verbal fight, which failed to launch due to Donalds’ calm, cool handling of the host’s combative tone.

And Cuomo was back for more action Wednesday, going head to head with Tony Roman, owner of Italian restaurant Basilico’s Pasta e Vino in Huntington Beach, California, who posted a front-door sign requiring that patrons provide “proof of being UNvaccinated.”

Basilico’s Pasta e Vino in Huntington Beach is requiring diners provide “proof of being unvaccinated,” despite the… https://t.co/SItfYm4ORN

The smaller print on the sign reads, “We have zero tolerance for treasonous, anti-American stupidity.”

Cuomo began the segment by introducing Roman and adding that the outspoken restauranteur also engaged in other headline-grabbing ventures such requiring patrons to go maskless inside his establishment — as well as putting up a billboard that played on a famous phrase from “The Godfather”: 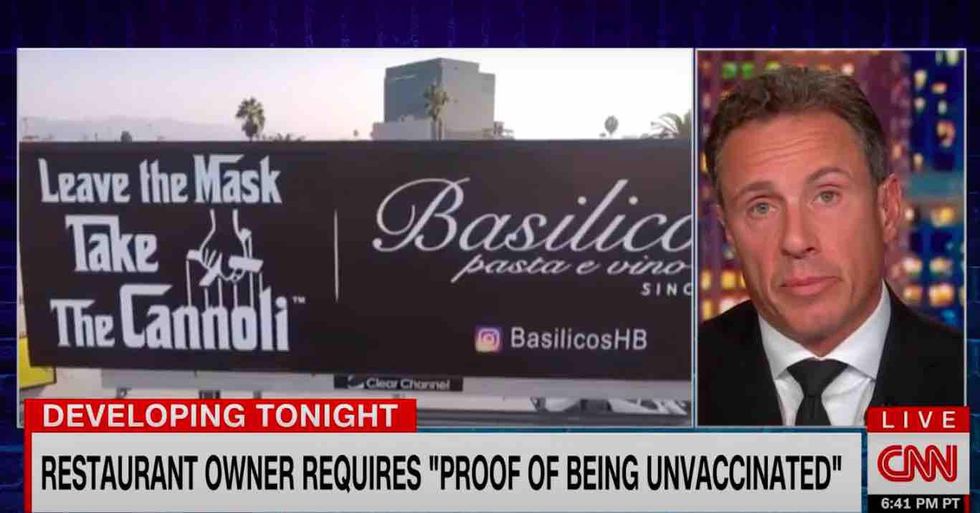 As you can see, Cuomo was not thrilled.

“Of course, it has to be an Italian guy, and he’s using ‘The Godfather,'” Cuomo says before appearing to get flustered and shaking his head before moving on.

It’s important to point out that in 2019, Cuomo was infamously caught on video threatening to throw a man down a flight of stairs for daring to refer to him as “Fredo,” the weak brother in “The Godfather” — which likely gets under his skin since his older brother is New York Gov. Andrew Cuomo.

At that point the interview began, and Roman was shown on the right side of the screen inside his restaurant’s lively kitchen. After Cuomo uttered the name of the restaurant, Roman replied, “Man, you said the name perfectly … good job. Now I know you’re Italian.”

And it was on.

“Tony, is this a little bit of a joke? Can you give me some hope that you really don’t want people to not get vaccinated so they can come to your restaurant?” Cuomo asked, adding a New York-ish accent on the end of his query. 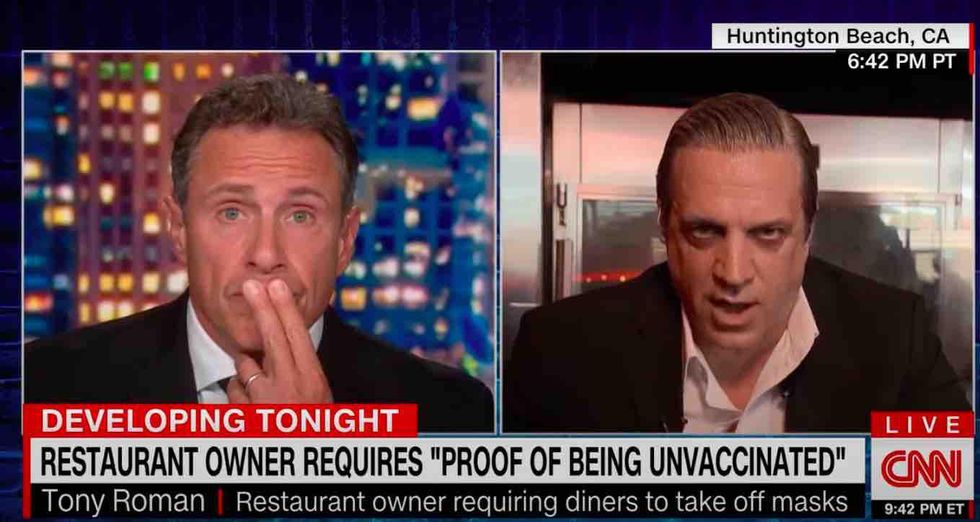 He added, “It’s an IQ test. And like I say to people when they ask me, if they’re so blinded with their rage and their hate, I tell them, ‘You know what, if you still don’t understand it, maybe we should put up a sign … that says you’re too stupid to come into the restaurant.’ I mean, it’s very simple. … I think you figured it out, am I right?”

For the record, a restaurant employee told the Los Angeles Times earlier this week that there’s no way they can check if a patron hasn’t been vaccinated, which tells you a lot about the intent of the sign.

The pair then begin questioning each other about their vaccination status, after which Roman tells Cuomo that he’s “failing the IQ test …. which I expected. What you’re not getting is that this is not an anti-vaccine stand; it’s a pro-freedom stand. That’s what you’re not getting.”

After Cuomo asserts the importance of “the science” in regard to COVID-19, Roman shoots back, “So what’s next then? Are we all gonna lock ourselves in our homes whenever there’s a flu outbreak? Or there’s an outbreak of the common cold? … Wear a moonsuit? I mean, where does it end?”

Cuomo then claimed “the only reason” the spread of COVID-19 variants “is happening is because people don’t protect themselves, Tony. I mean, what are you thinkin’?”

‘My ass it’s been documented’

Roman replied by bringing up Cuomo’s much-publicized bout with COVID-19: “Then why did you leave your house when you had COVID? … It’s been documented.”

Then as the very old-school instrumental “Theme from a Summer Place” was audible from inside Basilico’s Pasta e Vino, Cuomo got even more testy: “First of all … my ass it’s been documented.” 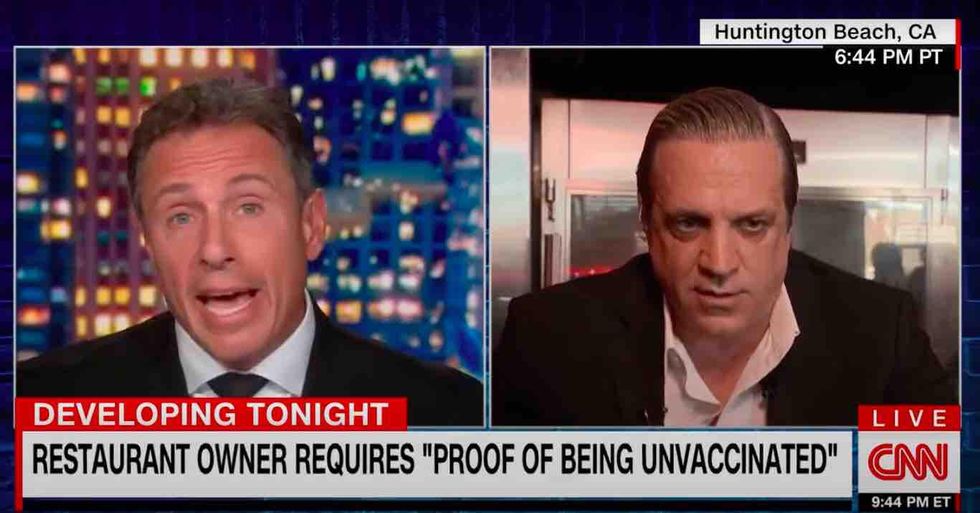 The host then briefly ran through his version of events before saying, “I’m trying to help you, Tony.”

Cuomo then told him, “I don’t like people making bad decisions for themselves and their family. I was hopin’ it was a little bit of a stunt. You have the freedom not to take the vaccine. I just don’t know why you don’t think it’s a good move.”

To which Roman responded, “Maybe — maybe we should ask your brother about protecting people, right?” As readers of TheBlaze know, Andrew Cuomo has been deeply criticized for his handling of the pandemic in New York state. And on Wednesday he announced that state employees will be required to be vaccinated against COVID-19 or get tested weekly — and also urged businesses to admit only vaccinated patrons.

“Hey, look, that’s his job,” Chris Cuomo replied to Roman, “and if he doesn’t do it well, people won’t vote for him.”

‘I don’t shy away from much’

As the pair continued to spar, Cuomo threw down: “Look, Tony, I don’t know if you know me too well; I don’t shy away from much. I’m asking you about you.” 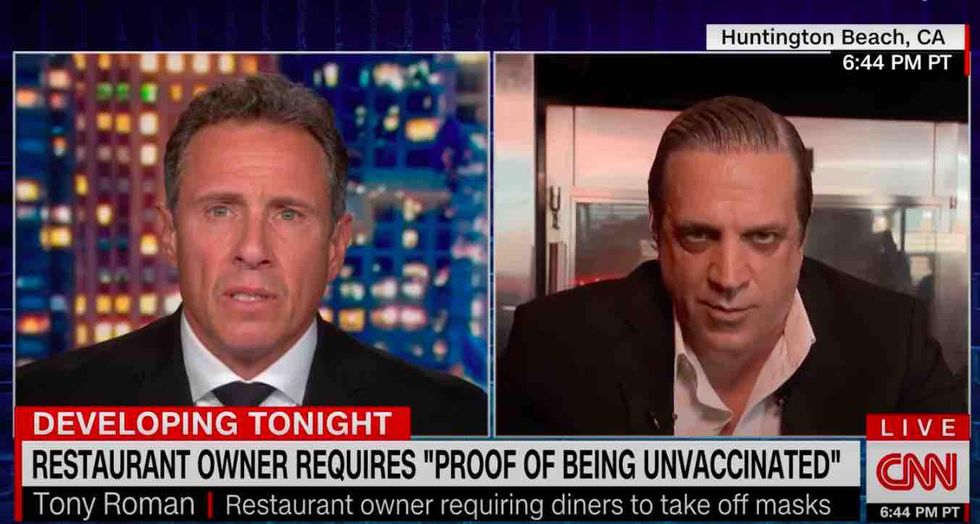 With that Roman shot back, “You talk a lot” and explained to Cuomo that he won’t see signs for former President Donald Trump or political slogans at his restaurant and that his stances are not about science but about freedom.

“You’re pro-freedom but people can’t wear masks,” Cuomo replied. “Tony, it doesn’t make sense. It really doesn’t. I gave you a chance to make the case. I wish you well. I hope your family stays safe.”

Then Cuomo upped the ante: “I mean, honestly, you sound like an idiot, so there’s not much to say. Tony, good luck with it. See ya.”

“And so do you,” Roman answered, after which Cuomo chirped, “Yeah, only for having you on the show, that was my only mistake.”

After the interview, Cuomo spoke directly to his viewers: “Look, it’s just stupid. ‘I’m pro-freedom’ .. what the hell is he talkin’ about? … He doesn’t want to know the science. This is my problem with the enablers of guys like this. I hate that he’s Italian-American, by the way, ’cause it plays into a stereotype. … The suggestion that somehow there is a strength in the resistance to the science, to the mandate, to ‘being told’: ‘You don’t tell me … I’ll do’ … it just doesn’t make any sense. It is such a false sense of strength … a stupid ethnic stereotype masculine moronic thing to be. You wanna talk about my brother, fine. Fine. I back away from nothing. … but guys like this? I was hoping it was a stunt. It’s not. The joke’s on me, but I’ll tell you what: Don’t be like him.”

It’s fair to point out that Cuomo, while criticizing “ethnic” machismo, was guilty of it more than once in his own segment. (“I don’t know if you know me too well; I don’t shy away from much” and “I back away from nothing.”)

And let’s not forget what Cuomo said in public after he was called “Fredo” just two years ago.

“Any of you Italian? It’s a f***ing insult to your people. It’s an insult to your f***ing people!” he told his adversary before declaring, “It’s like the N-word for us.”

Cuomo also told the heckler, “If you want to play then we’ll f***ing play.”

CNN host Chris Cuomo has little to no chill when someone calls him “Fredo”. https://t.co/w8pYFfq1Q9